Home
Search
News
Weather
Sports
Video
Community
Contact
Deals
ROCHESTER, Minn. - Investigators are releasing new information about a Mother's Day murder in Olmsted County.
There are still plenty of questions about why the accused shooter, William Shillingford, showed up at John Colbert's residence near Oxbow Park & Zollman Zoo Sunday night, taking the life of the 70-year-old Byron man on Mother's Day.
Shillingford is a 31-year-old from Kasson, who was at one point employed as a fitness manager or instructor at a Byron gym. He was arraigned on two counts of second-degree murder Tuesday, as well as one count of second-degree assault with a dangerous weapon. Each murder charge carries a maximum sentence of 40 years in prison, while the assault charge comes with a maximum 10-year sentence.
Prosecutors say Shillingford has a history of concerning behavior, and believe the shooting was intentional. A judge has set his bond at $1 million.
As authorities piece together what led to the tragedy, marking the first reported murder in Olmsted County this year, they say Shillingford and Colbert knew each other before Sunday night.
"Their families were acquaintances, so they did know each other before this incident happened," said Lt. Lee Rossman of the Olmsted County Sheriff's Office. "He has hunted on this property before, but for that night, we don't know what led him there for this incident to happen."
Court documents reveal Colbert's son and another family member were at the residence in the 500 block of County Road 105 of Kalmar Township that night. Around 10:45 P.M., Colbert's son saw a gray Toyota Tacoma pull in, circling the driveway once before parking.
The son walked out to a detached garage on the property, where a noticed a white male hiding around the corner. An outdoor surveillance system captured the entire incident, including the moment Colbert and his son returned to the garage, with the 70-year-old armed with a handgun.
As they approached, police say video shows the suspect "racked" his own handgun, assumed a shooting stance. He fired three rounds in three different shooting positions, one hitting Colbert in the arm, and another grazing his midsection.
"Mr. Colbert's son grabbed the gun from Mr. Colbert, stepped back outside, and fired two rounds toward Shillingford's parked vehicle. Shillingford ran from the residence in an easterly direction towards an unoccupied building on an adjacent property," Lt. Rossman said.
Colbert was bleeding out and unresponsive by the time emergency crews arrived. He was pronounced dead minutes later at 11:24 P.M.
Meanwhile, responding officers set up a perimeter to contain the shooter, who they believed was Shillingford after checking the registration of the truck parked in the driveway. Two witnesses reported seeing a man tip-toe across a field, hide in a ditch, yell at them, and run from police coming into the area.
Officers then saw Shillingford run toward the driveway of a nearby residence, and detained him at gunpoint. Shillingford was said to be "extremely belligerent," and continued to yell out "random names."
Investigators later found a handgun and empty magazine inside a barn/event center, where they say Shillingford was hiding out.
Authorities are still looking into a potential motive, as well as whether Shillingford was intoxicated or having a mental health crisis. One detail that stands out - Shillingford was out and about before the fatal shooting took place.
"He visited relatives with his children, and his children's relatives, made a couple of different stops throughout the day into the evening. Before he went out to the incident address, he was speaking with a friend, and that's about all we can give you on that information at this point," said Lt. Rossman.
Shillingford's next court appearance will be on May 24th. You can read the full criminal complaint against Shillingford, which contains additional details, below:
Download PDF 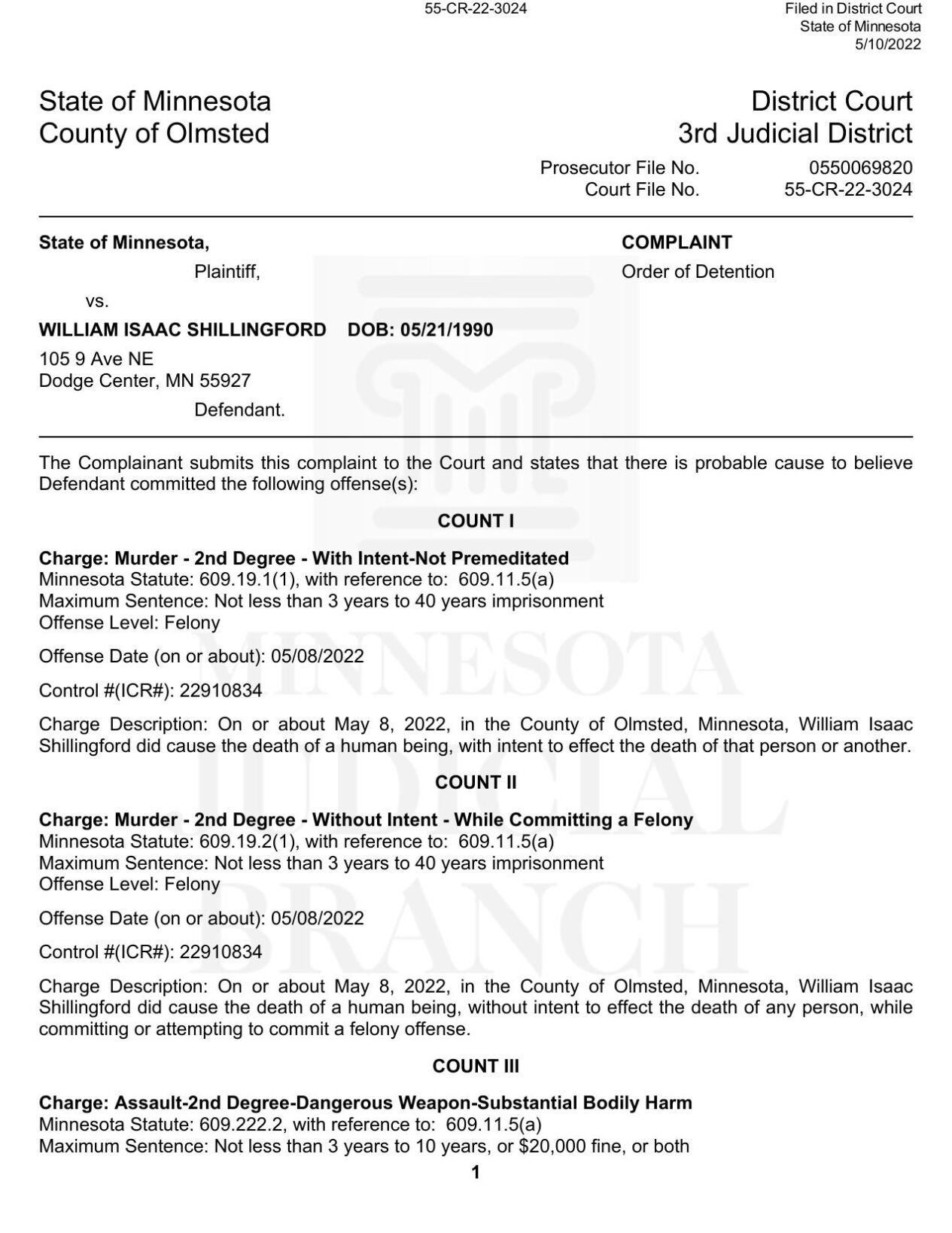