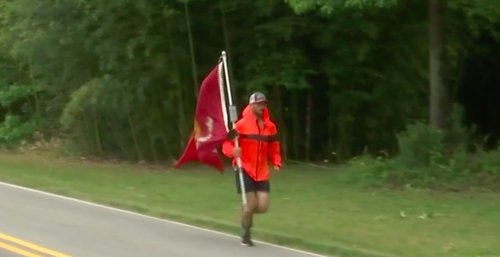 ATLANTA, GA (WGCL ) -- Former Marine, Russell Larkins began his battle against the corona virus in a doctor's office, but now he’s taking his fight to the street.

That’s when he decided to use his hobby of running as a fundraiser.

"I’m running from Wilmington, North Carolina to San Francisco, California to raise money for people that lost their jobs, got furloughed, or can’t pay their bills. Mainly veterans but also families in general having trouble right now.

“We’re doing it for three foundations the semper fi foundation, the team Rubicon and the Gary Sinise foundation who are always you’re helping families whether they are veterans or not,” added Larkins.

Friday, Larkins added an additional 2.3 miles to his run in support of Ahmaud Arbery, an African American man shot and killed in Brunswick while on a run, money he raises Friday will also be donated to the family.

For now Larkins plans to continue his path running on side roads that parallel i-20 until he gets to his next major city.

“I want to thank everyone for their support. They’re a lot of people supporting us. I was sleeping on the side of the road for the first two nights and now we’re in hotels”

If you can’t donate funds, join Russell on the run a Million Miles challenge, just download the STRAVA app, add the group “A Million miles Against COVID” and record your walks, runs, bike rides, or hikes to help reach the one million miles marker.

Costume shop closes because of pandemic

Switching gears to a new season