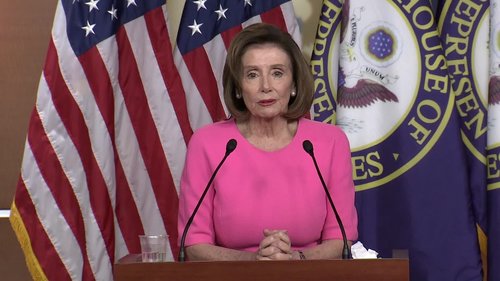 House Speaker Nancy Pelosi on Thursday predicted that the House will overwhelmingly approve the...

House Speaker Nancy Pelosi on Thursday predicted that the House will overwhelmingly approve the $2 trillion stimulus package with a 'strong bipartisan vote' after the measure passed the Senate late Wednesday night.

'I anticipate and feel certain that we will have a strong bipartisan vote,' Pelosi said, touting the changes Democrats were able to secure in the final package.

The House is on track to vote on the package on Friday, with House Majority Leader Steny Hoyer announcing Wednesday evening that the House would convene 9 a.m. ET Friday to consider the relief package.

But how they will vote is still uncertain. Many House members are now scrambling to book flights and return to Washington amid concerns that they could be forced to show up in person and vote on the stimulus, according to multiple sources familiar with the matter.

The legislation was expected to pass by voice vote, a move that would allow the House to avoid compelling all of its members to return to Washington for a recorded roll call vote. But Hoyer's office advised members Thursday evening they are encouraged to be in Washington Friday at 10 a.m. because the bill may not pass that way after all. 'There is now a possibility,' the notice from Hoyer's office said, that a Republican may force a recorded vote.

On a conference call with Democratic members Thursday, Pelosi said that if they are unable to pass the bill by voice vote Friday, then they would have a roll call vote Friday on final passage, according to three sources on the call.

Several members told CNN there was ample confusion since Hoyer previously indicated to members that any roll call vote would occur Saturday instead.

If a recorded vote is to happen Friday, members who want to cast a vote on the historic measure need to get to Washington quickly.

'We expect to have a voice vote on it, but if we don't, we'll be prepared for whatever it is. One way or another, with losing no time .. we will be passing the bill tomorrow,' Pelosi said earlier Thursday.

Pelosi argued that 'if somebody has a different point of view, they can put it in the record,' adding, 'but we're not worried about that.'

Republican Rep. Thomas Massie of Kentucky is viewed as the most likely member to try to force the recorded vote, after indicating publicly his reservations for letting the bill pass by voice vote. Democratic Rep. Alexandria Ocasio-Cortez of New York has not ruled out the possibility of asking for the yeas and nays, but Democrats don't believe she will.

Neither Massie nor Ocasio-Cortez responded to requests for comment Thursday.

House Minority Leader Kevin McCarthy said ahead of Friday's vote that he isn't sure how many GOP members will be present for the vote, as some members have been infected, others are quarantining and still others will have challenges traveling to DC with canceled flights.

But he said there will be enough members present to pass the bill on a voice vote -- and he said it would be 'wrong' for a member of either party to call for a full vote on the floor, instead of allowing a voice vote.

The Senate approved the massive stimulus package by a unanimous vote of 96-0 on Wednesday evening, paving the way for the House to act next. President Donald Trump has indicted he will sign the bill, which stands as the largest emergency aid package in US history and the most significant legislative action taken to address the devastating toll the coronavirus has taken on public health and the US economy.

Pelosi also made clear that lawmakers will not be done responding to the coronavirus crisis after Congress passes the stimulus package.

She said that the 'next step' will be working to take action on priorities for House Democrats that have not yet been addressed in any of the three legislative packages that have materialized so far, including changes for who qualifies for family and medical leave, stronger protections for workers, boosts for the Supplemental Nutrition Assistance Program and more money for state and local governments.

Pelosi said House Democrats will 'be taking the lead' in crafting the next bill, but emphasized that negotiations should be carried out by the four corners of House and Senate leadership working together. She said she'll mostly be working from DC and that House committee chairs will be involved in the process.

She also suggested that future legislation might include additional direct payments, which are one element of the massive stimulus package currently before Congress.

'I don't think we've seen the end of direct payments,' she said.

Pelosi said in an interview with Bloomberg TV later on Thursday morning that the phase four coronavirus response bill 'will lean toward recovery — how we can create good-paying jobs and to go forward, perhaps building the infrastructure of America.'

In contrast, McCarthy did not sound eager to jump immediately into conversations about a phase four coronavirus response bill.

'I wouldn't be so quick to say you have to write something else. Let's let this bill work,' McCarthy said. 'Whatever decision we have to make going forward, let's do it with knowledge. Let's do it with the experience of what's on the ground at that moment in time.'

The House speaker during her press conference also appeared to push back on Trump's remarks in recent days about limiting social distancing measures by Easter Sunday.

'I've said from the start that we must have a proposal that's government-wide, science-based, so that we can really address the challenge that we face in a scientific, evidence-based way. That is not necessarily the course that has been advocated by some, but it's where we must be if we're going to end this,' Pelosi said.

'Every day, every week that is wasted on not taking that warning seriously is a problem,' she said.

This story has been updated Thursday with additional developments.

Walz: 'Stay at Home' order likely to be extended through April 30

Keeping relationships health during a pandemic