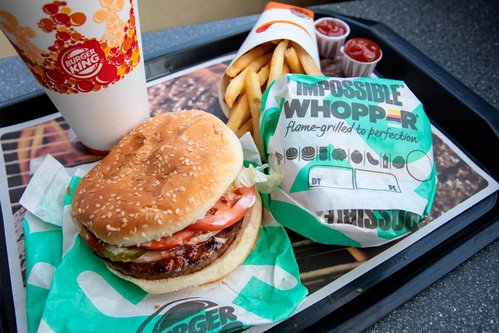 In its latest marketing stunt, Burger King is offering travelers whose flights are delayed free...

Between December 18 and December 30, travelers at any US airport can earn a coupon for a free meatless Whopper after entering their delayed flight information on the "Delay Your Way" screen in the Burger King app.

Fast food brands often try to set themselves apart with splashy promotions or stunts. Burger King uses the tactic often. Last year, it ran a deal that let app users buy a one-cent Whopper if they were within 600 feet of a McDonald's. It has served a "Ghost Whopper" for Halloween and "Real Meals," labeled with different food and colors, to poke fun at McDonald's Happy Meals.

This time, in addition to encouraging people to use its mobile app, Burger King is using this promotion to boost sales of its Impossible Whopper even further.

Burger King first tested the meatless burger in April, and rolled out the product nationally in August. José Cil, CEO of Burger King parent company Restaurant Brands International, said the product has been driving growth at the chain.

"The Impossible Whopper is a huge hit with our guests and has quickly become one of the most successful product launches in Burger King's history," he said during an analyst call discussing RBI's third quarter earnings. Sales at US Burger King restaurants open at least a year jumped 5% in the quarter, the highest spike by that metric since 2015. "We couldn't be happier with the performance" of the product so far, he said.

A Burger King representative said that the "Delay Your Way" promotion is intended to "continue to drive guests to try the product if they haven't already."

Fast food chains are rushing to add meat substitutes to their menu as consumers become increasingly interested in plant-based proteins as a way to eat more healthily and reduce their environmental footprints. Dunkin' is selling its Beyond breakfast sandwich nationally. KFC has tested out Beyond Fried Chicken in Atlanta, and McDonald's tested a plant-based sandwich in Canada.

The companies are all trying to capitalize on a potentially lucrative trend. Barclays predicts the alternative meat sector could reach about $140 billion in sales over the next decade, capturing about 10% of the global meat industry.

Authorities ID boy, 5, who was allegedly murdered by his brother in SE Minnesota

'Armed with Unity' demonstration in Rochester

Camping industry struggling at the start of summer

Wheels of Justice begin to turn in George Floyd case

Getting back into the swing of things