He'll be the first federal prisoner executed in 17 years. Relatives of his victims are pleading for his life 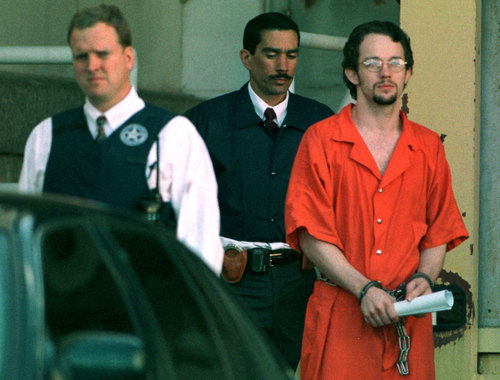 The family of Daniel Lewis Lee's victims were packing bags and planning an hours-long drive to Indiana last week as prison officials there prepared for the f...

The family of Daniel Lewis Lee's victims were packing bags and planning an hours-long drive to Indiana last week as prison officials there prepared for the first federal execution in nearly 17 years.

Lee, a onetime white supremacist convicted in a triple murder, was scheduled to be put to death this past Monday, and relatives of the young family he killed had arranged to travel up from rural Arkansas where the grisly crime occurred to bear witness.

After all, when Attorney General William Barr announced this summer that the Trump administration would revive the use of capital punishment at the national level, he attributed it to a debt owed by the Justice Department 'to the victims and their families.'

But Earlene Peterson -- the 80-year-old matriarch of the family, whose daughter, granddaughter and son-in-law were tortured, killed, and dumped in a lake by Lee and his accomplice -- did not want it done in her name.

'It would shame my daughter,' Peterson said in an interview, 'that someone has to die for her.'

Lee's execution was not carried out on Monday as planned. As the prison was going through its final motions, a court in Washington blocked the death sentence from being carried out.

The Justice Department challenged the ruling up to the Supreme Court. But on Friday, the government lost there, too, delaying the execution of Lee and three other men for at least several more weeks as federal judges consider whether a new lethal injection protocol proposed by the government passes legal muster.

That's allowed Peterson to continue her unusual fight to save the life of the man who killed her daughter, granddaughter and son-in-law.

It's also an unusual message for Peterson to deliver: she is a Trump supporter asking the President to go against his tough-on-crime gut.

'For one time in your life, lean to your better self and know that this is wrong. And I don't want this done,' Peterson said.

Peterson is not alone in that sentiment. Both the lead government prosecutor and the trial judge who presided over the case have since said that Lee's death penalty is unjust.

Lee and another man, Chevie Kehoe, were convicted in 1999 in a plot to steal guns and money to help fund a white ethno-state in the Pacific Northwest.

Prosecutors said that to further their cause, they robbed and murdered William Mueller, a gunsmith with cash and weapons in his house, his wife, Nancy, and her 8-year-old daughter, Sarah.

The family's bodies were found weighed down and tossed in an Arkansas bayou. The three had been shot with a stun gun, bound and suffocated with plastic bags over their heads secured with tape.

After the men were convicted, a penalty trial began, with the jury deciding first that Kehoe, who had been described as the ringleader of the crime, should receive only life in prison without parole.

At that point, prosecutors in Arkansas had intended to argue for the same sentence for Lee, but they were overruled by officials at the Justice Department in Washington and directed to seek the death penalty for Lee -- a sentence that the jury eventually handed down.

It left Kimma Gurel, Peterson's remaining daughter who attended nearly all of the trial alongside her, with a sense that justice had been denied.

'There's no question in my mind that Daniel Lee is guilty. The part that's questioning is that the other man was more guilty and he got life without parole, so why did Daniel Lee get the death penalty? It didn't make sense,' Gurel said.

Lee's attorneys have since argued that prosecutors relied on discredited science to prove that he would be a psychopath in prison. They also argued prosecutors misled the jury about a prior murder falsely attributed to Lee when they sought to prove he'd be a danger in prison and should be put to death.

Two federal judges in Arkansas that looked at the issues cast doubt on whether the jury would have returned a death sentence for Lee if the faulty evidence had not been included.

But both judges' hands were tied to overturn the sentence because of procedural limitations. The latest salvo by Lee's legal team to dispute the merits of the death sentence was rejected by an appeals court last week.

Ruth Friedman, the director of the Federal Capital Habeas Project -- an arm of the Federal Defender Program that represents Lee -- says she's never seen such a group come forward in opposition to an inmate's death.

'In whose interest is it to execute this man when you have the victims, the lead prosecutor in the case, the judge who tried the case and oversaw the proceedings that followed it -- they're all saying this should not go forward. In whose name is this going forward?' Friedman asked.

Since Lee entered death row, the government's concerns about his potential danger have not played out, Friedman said. And Peterson said that she was told by nuns who visited with Lee that he has changed.

Not everyone in the family agrees with her, but Peterson wants Lee to spend his life in prison instead of dying early. She came to the decision, she said, after prayer, soul-searching, and 'honest gut thinking.'

At her house in the Ozarks, pictures of her daughter Nancy still hang on the walls, and Peterson says good morning to them each day, and goodnight to them each night.

She doesn't want the memory of her daughter and granddaughter to go away. 'They don't die unless you let them die. And I'm not going to let them die,' Peterson said.