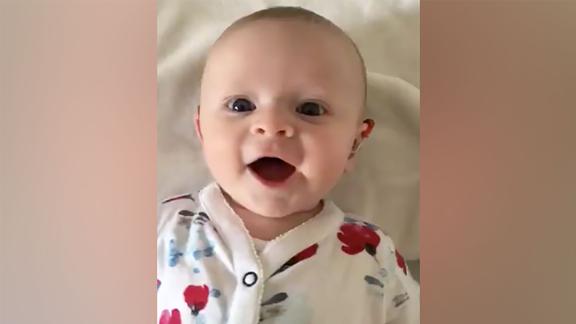 Each morning, 4-month-old Georgina Addison's parents turn her hearing aids on. Video of her reacting to her mother's voice has been viewed more than 600,000 times on Twitter.

After months of stalemate, lawmakers in the House and Senate have finally reached a bipartisan deal to address surprise medical bills.

While the issue is one of the few to enjoy broad cross-party support on Capitol Hill and in the White House, just how to spare Americans from unexpected bills became bogged down amid a lobbying and advertising blitz by the health care industry.

At issue are the bills that patients get after receiving care from out-of-network physicians or hospitals, often in an emergency situation.

These unexpected charges are one of Americans' top health care headaches. Roughly 1 in every 6 emergency room or in-hospital stays generated at least one out-of-network medical bill in 2017, according to a Kaiser Family Foundation analysis.

Insurers favor the government setting a benchmark rate, but hospitals and other providers -- often backed by private equity firms -- strongly support resolving the matter through arbitration.

It would require insurers at minimum pay the market-based, median in-network negotiated rate, according to details released Monday. But if that payment is above $750, the provider or insurer may elect to go to binding arbitration. Patients would only have to pay the in-network rate.

President Donald Trump, who called on Congress to address the issue in May, applauded the efforts.

'This compromise reflects the input of doctors and hospitals and is the result of months of delicate work to reach a deal among congressional members and the White House that protects patients,' the White House said in a statement Monday. 'Americans should not be surprised with huge medical bills when they are most vulnerable.'

Senior administration officials have said in the past that they do not support arbitration.

The agreement is not yet a done deal among lawmakers, however. Sen. Patty Murray, the top Democrat on the health committee, has not yet lent her support.

'Sen. Murray believes the overall agreement takes important steps forward on a number of issues impacting patients and families,' one of her aides said. 'She's working with members of her caucus on concerns they still have and is very hopeful a final agreement can be reached that's consistent with the goal she's had throughout this process: ending surprise billing without shifting costs back onto patients in other ways.'

The American Hospital Association voiced its displeasure with the deal.

'Unfortunately, unless this proposal is much improved over previous bills that rely on a benchmark rate, it remains highly problematic and would jeopardize patient access to hospital care, particularly in rural communities,' said Rick Pollack, the association's CEO.

The agreement also extends funding for community health centers for another five years, seeks to lower health care costs by increasing price transparency and make it easier for generic and other less expensive drugs to come to market faster. It would also raise the minimum age to buy tobacco products to 21, from 18.