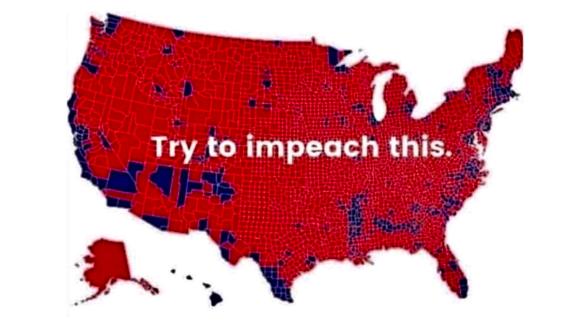 President Donald Trump tweeted a map with the words "Try to impeach this" written across it that purported to show county-by-county results of the 2016 election, but it inaccurately displayed multiple blue counties won by Hillary Clinton as red counties won by Trump.

On Tuesday, President Donald Trump tweeted a map his daughter-in-law Lara Trump had shared on Saturday.

The map purported to show county-by-county results map of the 2016 election, filled with red for counties Trump supposedly won. The words "Try to impeach this" were plastered across the middle.

The Trumps seemingly did not produce this map themselves -- it appears it was published in 2016 on HuffPost, a website usually critical of the President. But it is not correct.

It was also not the first time Trump has displayed an inaccurate county-by-county election map; he also displayed one in early 2018. And it was far from the first time that Trump has tweeted information from others without verifying it himself.

As numerous analysts have pointed out when Trump has previously touted county-level maps, such maps provide incomplete information. Specifically, they do not distinguish between a county with millions of residents and a county with a few thousand. Clinton earned about 3 million more votes than Trump even though he won far more counties.

As Twitter user Loren Collins noted on Tuesday, it appears that the county-by-county map shared by the President was initially published less than two weeks after the election on a personal blog dedicated to data visualization. The map was part of an article, by Max Galka, that examines how electoral maps usually don't provide enough information to show just how many people voted in each precinct.

The blog post was republished on HuffPost in December 2016. While the map on Galka's personal blog may have been updated -- the map in his article has the correct colors for each county -- the map on Huffpost is incorrect.

One possible reason this map did not reflect the final results: correct county-level results data can take a long time to come in. Certain states are not able to provide complete information until long after the election. "Some states don't certify their results until over a month after the election," says Harry Enten, a CNN senior analyst who specializes in data-driven journalism. "So any county-by-county map that looks at returns within a few weeks of the election is susceptible to potential errors."

In other words, it's possible that the original map used the best data available in mid-November 2016. But as more data came in, some counties switched from red to blue, rendering the original map inaccurate. CNN has reached out to Galka but has not yet heard back.

The map on Galka's personal blog appears to have been updated. But the version posted on HuffPost was not -- and, now, the currently incorrect version is being shared by the President of the United States as a defense against impeachment.