Walmart will deliver groceries straight to your fridge 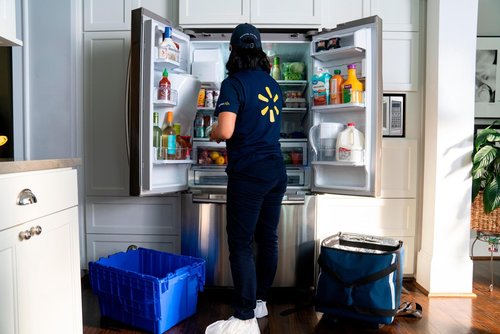 Walmart is betting it can convince time-strapped customers to let strangers deliver groceries into their refrigerators while they're away from home.In...

Walmart is betting it can convince time-strapped customers to let strangers deliver groceries into their refrigerators while they're away from home.

In a new service announced Friday, customers will be able to order groceries online, and then a Walmart worker will drive the food from a nearby store and deliver it to fridges in customers' kitchens or garages. It is Walmart's latest innovation in its grocery business, which makes up more than half of the company's annual sales.

Walmart piloted its new service in New Jersey for five months and is ready to expand. The option will be available to more than a million customers this fall in Kansas City, Pittsburgh and Vero Beach, Florida. Walmart charges a fee for regular grocery delivery orders, and it did not disclose how much customers will have to pay for in-home delivery.

Here's how the service works: Customers can purchase groceries online and select a delivery day. Walmart's employees will wear a camera when they enter customers' homes, allowing shoppers to watch the process live from their phones. Customers won't have to pay for a camera, but they will have to purchase a special door lock. Walmart did not say how much the lock will cost.

Walmart believes it can entice shoppers with another convenient perk as part of its in-home delivery service: Later this year, customers will be able to leave their returns from Walmart's website on their counter and the employee will bring the item back to the store.

In-home grocery delivery is not an entirely new concept for Walmart. The company partnered on another grocery delivery option in 2017 with smart-security company August, which makes locks that customers can monitor on their phones. That test included drivers from a crowd-sourced startup to deliver the items to customers. Amazon launched Key in 2017 that allows delivery drivers inside customers' homes when they're not around.

The biggest barrier Walmart will face with its new service is that most people don't want strangers in their homes.

Bart Stein, a Walmart executive who leads the in-home delivery service, acknowledged some customers during the pilot test were initially skeptical of the concept. But he said Walmart had been able to change opinions once customers tried it out.

'We really saw the tables turn after one delivery during our pilot testing around how people would trust a service like that,' he said.

One way Walmart is trying to alleviate customer concerns about the service: A biography with three fun facts about their delivery employees.

Walmart workers who've been at the company for at least a year can apply for the in-home delivery position. If they get the job, they will go through training and the role will become their main responsibility.

Walmart US e-commerce chief Marc Lore did not say how many employees will be diverted to these new delivery jobs, but it's another skilled position the retailer has created as new technology emerges. Walmart has also created 30,000 'personal shopper' jobs in stores who select groceries for customers' online pickup and delivery orders.

Walmart's new delivery model comes out of its tech incubator, Store No. 8. The incubator develops companies, such as Jetblack, Walmart's chat-based shopping service in New York City, that help it stay ahead of future shopping trends.

Related: How to solve the world's plastics problem — Bring back the milkman

'We're taking it out of Store 8 and bringing it into the core business,' Lore said at a presentation to reporters on Thursday. Lore emphasized that Walmart will be able to use its own store network, grocery supply chain and employees for the service. He argued that combination will help distinguish the offering from competitors.

StormTeam 3: Rain and snow for this weekend, how much snow we will see up in the air

A Georgia bar owner removed $3,714 worth of bills stapled to the walls to give to her unemployed staff

Finding ways to save during the pandemic

StormTeam 3: Snow is on the way, but how much?

Options for breaking a car lease

Job outlook during pandemic may be less than desperate

Make your own disinfectant wipes