Jeb Bush says a Republican should challenge Trump in 2020 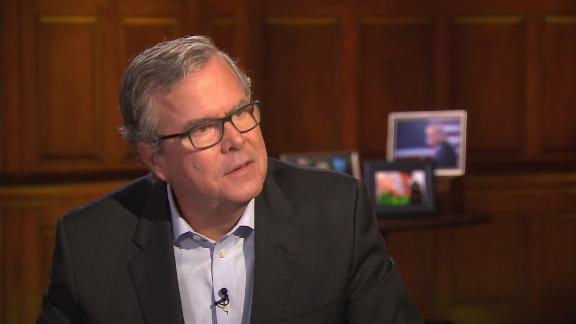 Former 2016 Republican presidential candidate Jeb Bush said he thinks a Republican should challenge President Donald Trump in next year's election, arguing the party "ought to be a given a choice."

Former 2016 Republican presidential candidate Jeb Bush said he thinks a Republican should challenge President Donald Trump in next year's election, arguing the party "ought to be a given a choice."

"I think someone should run. Just because Republicans ought to be given a choice," said Bush, who also served as the governor of Florida, in an interview with David Axelrod that will air Saturday on "The Axe Files." He added that beating Trump in 2020 will be difficult for anyone because "he has a strong, loyal base" and "it's hard to beat a sitting president."

"But to have a conversation about what it is to be a conservative I think is important," he added. "And our country needs to have competing ideologies that people -- that are dynamic, that focus on the world we're in and the world we're moving towards rather than revert back to a nostalgic time."

Bush's comments came as he was discussing Maryland Republican Gov. Larry Hogan, whose inauguration speech in January caused some to question whether or not he was eyeing a 2020 bid.

In his own speech at the inauguration, Bush lauded Hogan, regarding him as being "at the top of a list of leaders that I admire today because what's happening here in Annapolis is the antithesis of what's happening in Washington, DC, these days."

"I didn't realize I was part of his pre-campaign," Bush quipped during his interview with Axelrod, adding that when he heard the speech, "I kind of got a sense that maybe this was an opening, at least, for (Hogan) to consider (a presidential run)."

In the weeks following his inauguration, Hogan, a moderate Republican, told CNN he hasn't closed the door to challenging Trump in a Republican primary.

"People are talking to me about it," he said at the the time. "I'm flattered people are saying that and including me in those discussions. My focus, my plan right now is to stay here for four years and do the best job I can in Maryland, but I've said, 'You never say never.' Who knows what's going to happen."

Bush didn't say whether or not he's spoken to Hogan about a potential run, instead offering advice to Republicans ahead of the election by telling Axelrod that the party needs to "offer a compelling alternative" to Democratic ideas rather than just calling their ideas "bad."