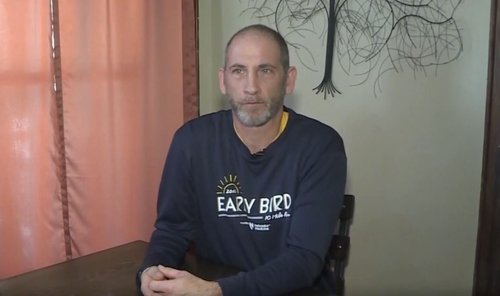 AVOCA, Iowa (KPTM) -- When FOX42 first contacted Rik about doing the story three months ago, he was deployed in Southeast Asia. We waited until he came back home to Iowa to tell his story of why he runs the patterns that he does.

It's an exercise many recognize but what Rik Zortman is actually doing spells out a much bigger picture.

It all started when he proposed to his wife with the message "Will you marry me?"

I was like, if I could do that, I could maybe script together words and just kind of go out and run them. Zortman then added an even deeper meaning to his runs... all his 3-year-old son, Armstrong, died from brain cancer.

For like 6 weeks after, I didn't know what I was going to do, and despite the 5k that I did, it was that mourning period of what's next? He said his son loved to run and that's how Zortman came came up with the idea.

720 names and 8 states later, his runs have gained attention all over the world.

It started from taking name requests online to Adidas is using his inspiring story for their new shoe launch in Los Angeles.

He said getting the words just right has a few obstacles in the way, even if it means cutting through a few yards to get there.

In the end, a huge victory he said reminds people of his son's memory.

To be able run in his honor and to run for other people. I'm just honored to be able to do it.

He said he'll be flying out to L.A. sometime this week to help launch the Adidas Ultraboost 19 shoe and he said he will also be a leader for one of the runs.

Mason City man charged for allegedly having meth in jail