It's Donald Trump vs. democracy. Which side are you on? 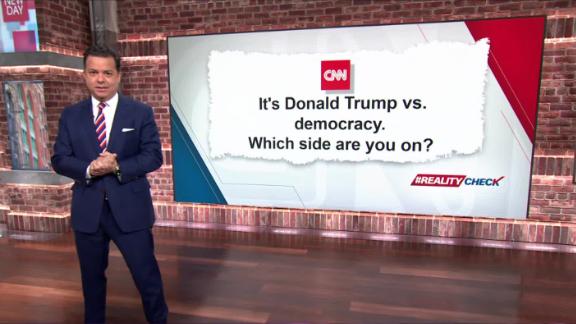 CNN's John Avlon looks at President Trump's legal cases and false claims, and how he is trying to overturn the 2020 presidential election.

If there was any ever doubt, by now it should be clear: This is Donald Trump vs. Democracy.

Amid the final flurry of conspiracy theories, which have translated into frivolous lawsuits and desperate political gambits, Trump campaign lawyer Jenna Ellis gave up the game when she cheered the brief but unprecedented partisan deadlock over certifying Wayne County's votes in the state of Michigan, where President-elect Joe Biden won by 148,000 votes.

Ellis tweeted: "If the state board follows suit, the Republican state legislator will select the electors. Huge win for @realDonaldTrump."

Here's what that means: the Republican-controlled state legislature would try to overrule the popular vote and submit a separate set of Trump electors to select the next president in the electoral college.

The good news is that there are many practical hurdles to achieving such an outcome. The bad news is that Ellis' statement translates to an official endorsement by the Trump campaign of a desperate strategy to stay in power by ignoring the results of the election and the clear will of the people. It is an admission that they care more about partisan power than democracy itself.

As Michigan-based Politico reporter Tim Alberta tweeted, "This system of certifying has always been ripe for exploitation by partisan hacks. Now the stars have aligned -- a demagogue president, a party bereft of integrity, and an activist base that believes 244 years of democratic norms are expendable if it means 4 more years of power."

The Washington Post's center-right reporter Robert Costa saw confirmation of a strategy he's been hearing from sources close to Trump lawyer Rudy Giuliani: "they know they can't catch up (in the vote count). What they want -- in MI, PA, NV, other states -- is for the vote to *not* be certified. Their end game: try to force it to the House. Giuliani talking about this privately," Costa tweeted.

Achieving this is unlikely for a number of reasons -- one of which is that each of these states has a Democratic governor, who could override a runaway Republican state legislature. In the case of Michigan, the state constitution makes it clear that "all 16 Michigan electoral votes automatically go to the presidential candidate winning the popular vote" -- which was Biden -- and GOP legislative leaders have pledged not to change the law in an attempt to put Trump in power, despite pressure from the president's allies.

Against this backdrop -- if you put reason, law and ethics aside for a moment -- the crazy-quilt of failed legal challenges asserting massive but unspecified fraud that has resulted in a 1 for 25 loss in court starts to make a little more sense. Because one clear commonality in each contested state has been a desperate attempt to block certification of the state's votes -- or to throw out votes from the major population centers, which in many cases -- not coincidentally -- are predominately African-American.

We saw that dynamic in the Wayne County deadlock, where the chair of the Wayne County Board of Canvassers, Republican Monica Palmer, said she would be fine certifying the county's votes, absent the city of Detroit.

More baseless claims about mass voter fraud were thrown out of a Michigan court last week, when a judge blocked Trump's attempt to stop certification of Biden's win by declaring accusations of widespread election fraud "incorrect and not credible." Not deterred by legal reasoning, facts or judicial decisions, Trump simply blurted out fantasies of a Michigan victory, declaring on Wednesday: "The Great State of Michigan, with votes being far greater than the number of people who voted, cannot certify the election. The Democrats cheated big time, and got caught. A Republican WIN!"

While Wayne County's canvassers reversed themselves in the face of massive "feedback" from voters, President Trump highlighted his autocratic impulses by firing his director of the Cybersecurity and Infrastructure Security Agency, Chris Krebs, for the sin of doing his job and telling the truth, when he said "there is no evidence that any voting system deleted or lost votes, changed votes, or was in any way compromised." Trump's baseless and failed legal claims of mass voter fraud depend on denying that reality. As a result, telling the truth is a firing offense.

None of this is normal or consistent with the character of our democracy. When Trump carried Michigan in 2016 by just over 10,000 votes, there was not this kind of skullduggery by Democrats. There certainly should not be with a Biden vote total 14 times larger. But this is evidence of a deeper rot -- the elevation of hyper-partisan self-interest over the national interest.

The fact that it is being pursued -- however fruitlessly -- by members of a party who consider themselves super-patriots shows just how much that term has been perverted. Because you can't be a real patriot in America if you don't support democracy -- which the dictionary defines as "government by the people, especially rule of the majority." Unfortunately, there has been a move to secure minority rule by Republicans -- as I explained in a recent Reality Check -- that sets the stage for this would-be travesty.

Republicans who naively believed that Trump would be chastened by his impeachment and that voters would be able to cast the final vote on his fitness for office (as South Dakota Senator John Thune argued, "the American people -- not Washington politicians -- should choose whether the president remains in office") must now confront the fact that Trump and his team, through Washington politicians and a contested electoral college decision, want to bypass the American people on the path to reelection.

This is a time for choosing. Republicans have coddled Trump by making excuses for why he is the first president in our history to refuse to concede that he lost an election. Now, Republicans need to decide whether they will condone an outright attempt to overturn the election. This is far more than a question of being a good party member. This is a test of whether you believe in our country more than a cult of personality. It's a question of whether mindless hyper-partisanship will overwhelm any remaining sense of principle.

This should not be a tough call: It's Donald Trump vs. Democracy. Which side are you on?

Man hit and killed by car in eastern Iowa

Iowa hospital says some kids were given wrong vaccine dose

L-O wins it all and PEM comes up short