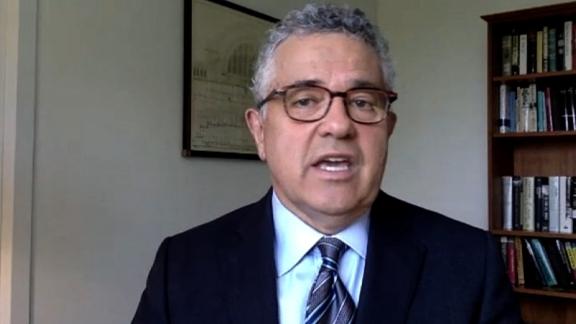 CNN legal analyst Jeffery Toobin reacts to the Supreme Court blocking House Democrats from accessing President Donald Trump's financial records, but ruling that the President is not immune from a subpoena for his financial documents from a New York prosecutor.

With Thursday's decisions rejecting President Donald Trump's absolutist legal claim that he stands above the law, Chief Justice John Roberts put the finishing touch on a remarkable Supreme Court term defined by his transformation into a powerful voice of judicial independence -- or, at least, unpredictability.

Time and again, Roberts defied conventional wisdom and entrenched ideology to join with the court's traditionally liberal bloc (and, at times, other conservatives) to deliver stunning rulings that forcefully rejected the Trump administration's legal positions on issues of vital importance to the American public.

Make no mistake -- the John Roberts Independence Tour of 2020 will have repercussions for generations to come.

Over the past three weeks, Roberts has repeatedly joined with the liberal bloc to deliver a series of momentous rulings. Roberts (and Gorsuch) concurred with the four liberal justices to rule that federal law prohibits employment discrimination against gay and transgender people.

He then provided a decisive swing vote in a 5-4 decision rejecting the Trump administration's effort to end the Deferred Action for Childhood Arrivals (DACA) program, which protects nearly 650,000 "Dreamers" from deportation.

Finally, Roberts sided with the four liberal justices, in another 5-4 decision, to strike down a Louisiana law that severely restricted access to abortions. He based his decision on a refusal to overturn existing precedent, suggesting he might be reluctant to reverse Roe v. Wade if and when such a case comes to the court.

Thursdays rulings on Trump's tax returns offer a mixed bag. Roberts joined with the liberal bloc, plus Trump-appointed justices, Gorsuch and Kavanaugh, to flatly reject Trump's legal claim that he is above the reach of prosecutors or Congress. However, by sending the cases back down to lower courts for further consideration, the court left Trump with enough wiggle room to delay and run out the clock, likely past the November election.

While Trump may postpone his day of reckoning, Roberts offered a forceful rebuke of the President's claim to be beyond accountability when he wrote, "In our judicial system, 'the public has a right to every man's evidence.' Since the earliest days of the Republic, 'every man' has included the President of the United States."

What exactly is behind Roberts' moves? He has not suddenly cast off decades worth of reliable conservatism and become a liberal. Just last week, for example, he joined with the court's four-justice conservative bloc to cast the decisive vote in a 5-4 decision permitting certain types of public funding for religious education and in another case keeping in place burdensome conditions on absentee voting in Alabama (more on this below). So, though Roberts occasionally has defied expectations recently and joined with the liberal justices, his voting record by and large remains conservative-friendly.

I believe Roberts is conscious of his legacy as chief justice and does not want his tenure to go down in history as the one where the court became hopelessly divided along political lines. He also has no reason or obligation to help Trump or promote the administration's agenda. More to the point, justices serve life terms, so Roberts owes nothing to anybody, and has nothing to gain from playing politics, for or against either party.

Indeed, Roberts, in 2018, issued a rare public statement rebuking Trump's criticism of the judiciary and reaffirming that "We do not have Obama judges or Trump judges, Bush judges or Clinton judges ... That independent judiciary is something we should all be thankful for."

This much is certain: Roberts became chief justice long before the Trump administration came to power, and he will likely hold that position well after Trump departs, whether in 2021 or 2025. His legacy will run through multiple administrations and is larger than the political winds of any given moment.

His rulings this term will become a crucial part of that legacy.

Aaron (Michigan): How much power do courts have over whether and how states use absentee ballots during the pandemic?

Earlier this year, for example, Alabama officials decided to postpone primary elections, and to allow expanded use of absentee ballots by people who concluded it was impossible or unreasonable to vote in person, given concerns about the coronavirus. But the Alabama rules also placed tough restrictions on absentee ballots: Voters must submit a copy of a photo ID to receive an absentee ballot, and then must submit an affidavit signed by witnesses along with the ballot.

A group challenged these restrictions as being unduly burdensome, particularly in light of the pandemic. A federal district court judge agreed, striking down photo ID and affidavit requirements. But the Supreme Court -- in a 5-4 decision, with Chief Justice Roberts joining the four more conservative justices -- stepped in and put the district court's ruling on hold, effectively leaving Alabama's restrictions on absentee ballots in place while the case works its way through the courts on appeal. As a result of the Supreme Court's decision, it will be substantially more difficult for Alabama voters to submit their ballots by mail.

Mike (Minnesota): Will we ever see the fully unredacted Mueller report, now that most of the cases brought by Mueller have concluded?

Perhaps, but almost certainly not before the election in November 2020.

Democrats on the House Judiciary Committee filed a lawsuit seeking the unredacted report -- including grand jury materials, which typically are confidential.

Both a federal district court and court of appeals ruled in favor of the House, finding that the Judiciary Committee had a "compelling need" to review all of Mueller's evidence. But the Supreme Court last week agreed to hear the case during its next term, which begins in October 2020, effectively putting the lower court rulings on hold in the meantime.

The Supreme Court, of course, will have final say on the matter. But it is exceedingly unlikely that the court will hear arguments and issue a decision before the election in November.

Yes. The Trump administration moved unsuccessfully in an effort to prevent publication of Bolton's book. This result was hardly surprising, given that the First Amendment strongly disfavors "prior restraints" on speech -- that is, preventing speech from being published in the first place.

But Bolton still may face financial consequences. While Bolton did submit his manuscript to the government for the required pre-publication review, it is unclear whether that review was formally completed. The Justice Department maintains that his book, as published, still contains classified information. If a court agrees, then Bolton would be liable to turn over all proceeds from the book (including related television or movie deals) to the federal government.

Three questions for this week:

1. When Ghislaine Maxwell makes her first court appearance in the Southern District of New York on July 14, will she be released on bail or imprisoned pending trial?

2. What steps, if any, will the House Judiciary Committee take to follow up on the testimony of former Southern District of New York US Attorney Geoffrey Berman about his removal by Attorney General William Barr?

3. Will Trump pardon Roger Stone before Stone reports to prison on July 14?

Duo arrested for meth and a gun in Northwood

North Iowa community reacts to finding of missing man's car: 'Relieved and heartbroke all at the same time'

President Trump to hold rally in Rochester on Friday

Douglas Trail dry but the bridge over Zumbro frozen