Mask and all, Biden crushes Trump 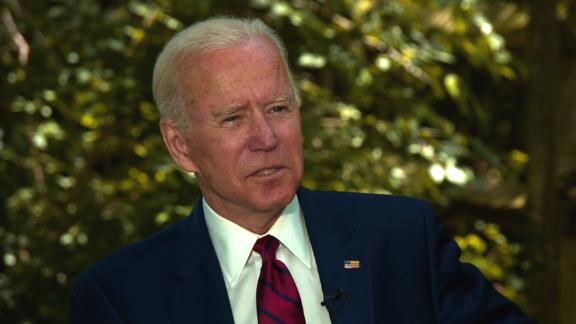 "He's a fool, an absolute fool," former Vice President Joe Biden said of President Donald Trump's refusal to wear a face mask. "Every doc in the world is saying you should wear a mask when you're in a crowd." Biden, the presumptive Democratic nominee, didn't raise his voice and smiled often. But he pulled no punches. "Presidents," he said, "are supposed to lead, not engage in folly and be falsely masculine."

It was Biden's first in-person interview since the pandemic forced him off the campaign trail two months ago, and CNN aired it moments after Trump gave another one of his bizarre, conspiracy-laden, self-aggrandizing presentations on the White House grounds. The two performances had much in common: both outdoors, on a beautiful late-spring day, both candidates campaigning, dressed the part. But the content, in case anyone forgot, was a reminder of how different the two men are.

Trump's statements were his by-now-familiar blend of lies, boasts, misdirection and insults. He had gathered the media for an event touting a deal to lower insulin costs for seniors. "Insulin. So many people. So necessary," he said, straying from his prepared text with chopped sentence fragments and non-sensical musings. "I don't use insulin. Should I be? Huh? I never thought about it."

Older voters are telling pollsters they prefer Biden, so that's no doubt why Trump declared, "we love our seniors," and claimed he will always protect medical coverage for pre-existing conditions even as his administration is in court trying to do away with Obamacare, the program that at long last expanded Americans' access to health insurance.

The President repeated his latest vile distraction: He again promoted the thoroughly unfounded claim that MSNBC's Joe Scarborough, a former Republican Congressman who is fiercely critical of him, may have been involved in the death of an aide in his Florida office 19 years ago. The death of the woman, who had a heart condition, was ruled an accident. On the same day the widower of the woman pleaded for an end to the use of his dead wife's memory for political games, Trump unapologetically did it again, "Very suspicious," he said.

It was another shameful performance; the kind Americans have been observing for more than three years. The kind that has put Biden ahead in the polls, which is possibly the reason Trump again claimed -- falsely -- that mail-in ballots would lead to large-scale fraud. Without mail-in ballots, millions of Americans afraid of possible infection at polling stations in the midst of a pandemic may not feel able to vote in November. Trump attacked the media, "Sleepy Joe," and gushed about what a great job he's done fighting the pandemic that on his watch has killed almost 100,000 Americans. It would have been many times worse, he bragged, if he hadn't done such a great job.

But the President's approach to the pandemic is a chaotic mess of contradictions. After retweeting a post from a Fox News personality mocking Biden for wearing a face mask at a Memorial Day event, Trump this time disparaged a reporter who asked about it. Trump told the reporter to take off his mask for the follow up question. The reporter said he would keep it on and speak louder instead, "Okay, good," Trump sniffed, "you want to be politically correct." Doctors and federal guidelines urge Americans to wear masks; the President refuses to do it, and mocks those who do.

Biden was asked if wearing a mask is a sign of weakness or strength. He said it's a sign of leadership. "A president's got to lead by example," he told CNN's Dana Bash. "This macho stuff is costing people's lives." Bash and Biden were sitting 12 feet apart. Bash said that they wore masks whenever they got any closer than that.

Biden punched hard at Trump, but the former vice president also did a credible job of acknowledging his mistakes. After an interview in which he joked that African-American voters who don't support him aren't really black, Biden again apologized, saying there's nothing wrong with admitting a mistake, especially if he's hurt someone. "If I say something offensive, I should apologize.

Biden's brand is decency. But Americans want more than that, especially now. They want a leader who will take them safely out of the current calamity. We need to reopen the economy smartly, he said, we cannot separate economic well-being from health. "There are ways to reopen rationally," to "put people in a position where they don't have to risk their lives to make a living."

Biden managed to come across as simultaneously strong and polite. If Trump watched the interview, you can bet he hated it. All those references to his phony masculinity, to his lies, to his foolishness, hit the mark. Let's see how Trump vents on Twitter.

Biden was smiling, but he raised the temperature in the race. Voters who watched both events saw the contrast, almost side by side. If you liked one of them, you couldn't possibly like the other.

No injuries reported after train derailment in Freeborn Co.

It's more than just wins for the Lourdes baseball team

Girls' and Women's USA Wrestling is excited for the sport's future

The Minnesota DNR has some tips for the fishing opener

Olmsted County is one of highest in state for drunk drivers

Minnesotans react to the mask mandate being lifted