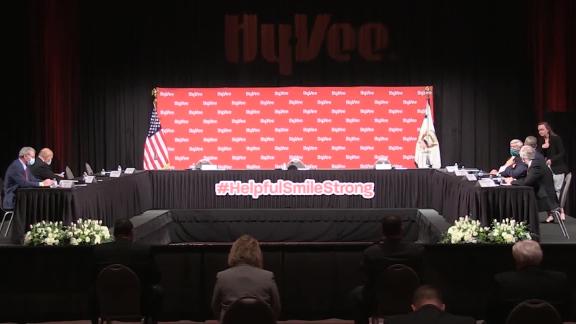 Participants at a food supply roundtable convened by Vice President Mike Pence in Iowa removed their face masks before Pence arrived, according to video from the event posted online.

In his public career, Vice President Mike Pence has stressed the power of prayer and been a skeptic about science.

At one point, he said that smoking doesn't kill and he refused to acknowledge the vast evidence that the planet is warming at an alarming rate that imperils us all. Now, in the age of pandemic, he is publicly running around without a face mask and insisting that it's OK for others remove theirs. In Pence's world (or maybe it's President Donald Trump's world) it seems that real Americans cough, sneeze and breathe free.

Let's be clear about the science behind the federal recommendation that everyone wear a mask in public settings, where social distancing is hard to maintain.

It is based on simple logic. When you wear a mask, you are protecting others because you may have picked-up the Covid-19 virus without knowing it. It's better to cover-up than to potentially kill someone with germs you might spread.

Just before Pence made an appearance for a roundtable discussion with five food industry executives in Iowa on Friday, a White House staffer told the executives that they could remove their masks before Pence made an appearance if they wanted to. CNN, citing a source familiar with the situation, reported that the aide "didn't ask and she didn't tell" them to do so. The source also noted the Centers for Disease Control and Prevention's guidelines that masks are not necessary if people can maintain a distance of 6 feet.

Although the staff member may not have forced anyone, it's safe to bet that perhaps the executives felt some pressure. First, who says no to a suggestion made by someone from the White House? Second, this is an administration that has been quite open about its disdain for medically and scientifically sound advice. Even the two execs who run meatpacking plants where hundreds of workers have been infected removed their masks.

Prior to this Iowa trip, Pence had learned that his aide Katie Miller tested positive for the virus.

One would think that even if everyone was able to remain 6 feet apart during the roundtable discussion that everyone would just exercise a bit of extra precaution. After all, what could it hurt to wear the masks?

Rarely have so many seemingly intelligent leaders opted to abandon reason so publicly for something so deadly as the right to spread a killer germ.

The revelation over Miller had prompted drama on the runway at Joint Base Andrews, where Air Force Two was delayed from taking off, so six people who had interacted with Miller could deplane. Everyone else stayed aboard and jetted off to Iowa where Covid-19 cases are spiking.

As they traveled in the state, Yahoo News reported that a Department of Homeland Security document revealed that 11 Secret Service agents had also tested positive (CNN has independently confirmed the news).

As Trump confirmed, Pence had himself been in contact with Miller.

Given the fact that hardly anyone at the White House uses a mask and the close quarters in the old building, it should be assumed that lots of folks got near enough to Miller to risk becoming infected by the virus without knowing it.

And it was with all of these variables in play that the vice president still decided to meet with executives -- who worked inside Covid-19 hotspots -- and have a staffer tell them that it was OK to remove their masks.

Prior to his meeting with food execs, Pence met with religious leaders and Iowa Gov. Kim Reynolds, who has loosened statewide restrictions on religious public gatherings as long as they "implement reasonable public health measures under the circumstances of each gathering to ensure social distancing...(and) increased hygiene practices...," according to a new proclamation in Iowa's public health emergency declaration from Reynolds.

Although the governor did "strongly encourage" those who are more susceptible to severe and deadly outcomes of the virus to limit their activities outside of their home, the move still means that religious services, and the contagious interactions that permit, can resume. Imagine what could happen if a young and healthy member of a household that, for example, consists of a grandparent, went to a church service where members were asymptomatic and then brought the virus back home.

But this possibility seemed not to be at the forefront of Pence's mind, as he spoke with the religious leaders.

It may have been, as Pence said, a "burden" for some to attend religious services online. But that he would describe this inconvenience as "a source of heartache for people across the country" when American families are losing loved ones to Covid-19 at a rate of more than 1,000 per day is profane.

The Iowa trip was just another example of the vice president, ever Trump's lackey, being right in step with his boss' tone deafness on the issue.

Consider last week's public relations stunt that had Pence delivering a few boxes of personal protective equipment -- without wearing a mask -- to a nursing home that had Covid-19 patients.

More than one million of the citizens Pence serves have received a terrifying positive test result. Thousands more get the bad news every day.

His own press aide, someone he knows well, is in quarantine. Why, in the face of this overwhelming and immediate danger, would he and the president persist in flaunting unsafe behavior and spreading deadly thinking across the land?

The answer is that pandemic denial has become, like climate change denial, a culture war fetish. Just like the automatic weapons brandished by some of those protesting stay-at-home orders, bare-faced public appearances tell the world that you consider the right to infect others a freedom that must not be abridged.

One can accept that people who have lost employment and are in desperate financial straits, might be moved to extremes in their desire for a return to the pre-pandemic order. A sensible leader, especially one who might actually capture the attention of these angry people, would offer them reliable facts, send immediate and substantial financial help -- and put on a mask.

Of 60 who tested positive at Cerro Gordo long-term care facility, 40 have recovered

Iowa Gov. Reynolds: 'All things are on the table' as state continues fight against COVID-19

Working in the heat

'Look Before you Lock' Initiative