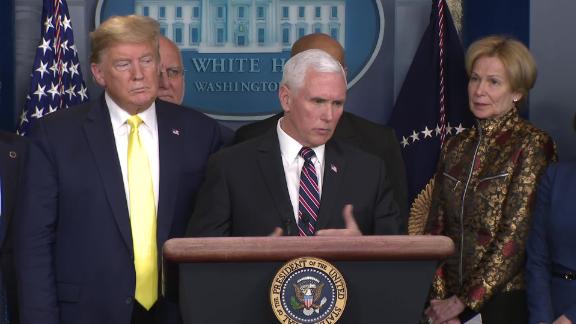 Vice President Mike Pence says he has not been tested for coronavirus and does not know if President Trump has been tested. Four members of Congress -- including one who recently shook President Donald Trump's hand and another who rode on Air Force One on Monday -- have announced that they would self-quarantine after coming into contact with an individual who was diagnosed with the novel coronavirus at CPAC.

White House spokesperson Stephanie Grisham says that in this time of coronavirus it'll be business as usual for Donald Trump. He's not going to cancel any rallies or worry much at all about whether he's been exposed to infection, it seems. "And I'll tell you what," she says, "with our President, this man who doesn't sleep and who I have seen work 15, 16 hours a day every day, I have no problem thinking that he is going to be just fine and just healthy."

If Grisham had been concerned about the American public, she might not have talked about how attending big public events, working yourself to the bone, and skipping sleep is a reasonable response to the threat the virus poses to us all. In fact, if this is what Trump is doing, it's the opposite of what is recommended for an obese, largely sedentary man of 73.

With any other president, we'd all be wondering what got into an aide who strained so hard to suggest the boss is some sort of superman, but this is Trump we're talking about. The man's narcissism and propensity for rage are well documented and Grisham was obviously playing to both qualities.

Long a subject of press reports, Trump's anger has been evidenced as he has fired cabinet members, chiefs of staff -- Mick Mulvaney, who never even got the chance to shed the "acting" in front of the title was dismissed just last weekend -- and those who testified about him during his impeachment. Administration officials are generally worried about delivering bad news to the boss for fear of how he'll respond. When a CDC official recently noted, correctly, that a coronavirus outbreak was inevitable in the US, Politico reported that Trump got so angry officials discussed ordering her to stop making public statements. (They eventually decided against this.)

Having made the point that Trump isn't changing anything, Grisham stayed true to the President's why-worry attitude. When she went the further step, to explain that he's an extraordinary specimen who doesn't need sleep and can work rings around mere mortals she played to the vanity that is his other defining characteristic. As Grisham and other administration survivors seem to know (I'm looking at you, Vice President Mike Pence), you can never go wrong by putting the President at the center of every discussion and slathering him with praise.

In the current crisis, the problem is not so much the President's overweening self-regard but his inability to recognize the needs of others. This problem, invariably a characteristic of the truly narcissistic, makes it difficult if not impossible for someone to put others first. In families, it can be evidenced by the parent who buys himself a new car when the rent is overdue. In countries, it is seen when a leader can't seem to see what people need in a moment of crisis.

Whether he's throwing paper towels into a crowd amid death and devastation in Puerto Rico or mocking victims of sexual assault, Trump has shown himself to be callous with enough regularity that he has taught us to cringe when we see him in a moment where concern for others is required. Remember how he joked about crowd sizes when he visited a hospital after a mass shooting in El Paso? How about the time, at the beginning of his term, when he stood at a memorial for fallen intelligence officers and bragged about his own intellect?

Compassion, which is the opposite of narcissism, is as essential to the presidency as any trait and presidents of both parties have shown it often. We all remember the moving responses from Bill Clinton after the Oklahoma City bombing, George W. Bush after the attacks of 9/11 and Barack Obama after the Charleston church shooting. It is something we have relied on from our leaders. It is also the piece so often missing from Trump's response to difficult times. This is the man, who, a Huffington Post video showed, needed an emotional cheat sheet for a meeting with survivors of school shootings. That the prompts encouraged him to say, "I hear you," is all the evidence we need to know that the White House staff recognizes that the President struggles when it comes to compassion.

Why is Trump like this? When I wrote a biography of him I learned that he was raised by a role model father who showed his son little of the sort of tenderness that would produce concern for others in a child. His education was guided by a military school drill sergeant who was toughness personified, and his introduction to the adult world was shaped by the well-known character assassin Roy Cohn. Given these mentors, and all the insecurity that came with being a rich kid playing with daddy's money, Trump was all but destined to be the man we see today. He is angry and narcissistic, and the best those around him can do is coddle him in the hopes that he won't make things worse.

Iowa Gov. Reynolds: 'All things are on the table' as state continues fight against COVID-19

Of 60 who tested positive at Cerro Gordo long-term care facility, 40 have recovered

Working in the heat

'Look Before you Lock' Initiative