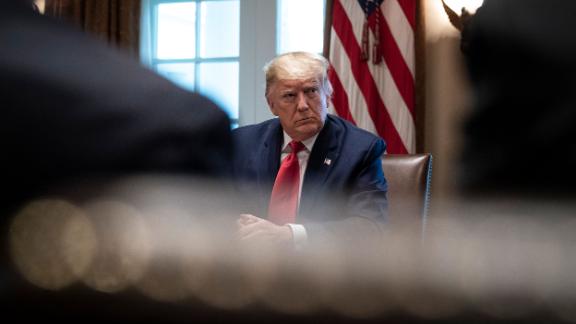 President Donald Trump sought to lay blame on the Obama administration for slowing down new diagnostic testing. CNN's Jake Tapper talks about to panelists about how this claim lacks evidence.

A spike in novel coronavirus in India has prompted concerns that the world's second-most populous country could face a serious outbreak of the virus, which to date has infected more than 95,000 people and killed at least 3,300 worldwide.

Twenty-nine cases have been confirmed inside the country, including three who have recovered. Many of the cases are linked to a group of travelers from Italy, the hardest-hit country in Europe, Health Minister Harsh Vardhan said.

Authorities in the country have advised caution, but have not raised the alarm. Vardhan told lawmakers in parliament Tuesday that public health authorities are focusing on India's "core capacities for disease preparedness and response."

The government has begun screening all passengers arriving in the country for coronavirus.

"The scale and extent of our interventions have increased in alignment the evolving situation of COVID-19 across the world, and India in particular," he said, referring to the disease by its formal name. "With the increasing global spread of the disease, we are confronted with new challenges. The contact tracing of positive cases requires the tracing of hundreds of contacts in multiple locations and monitoring their health."

Vardhan also said the government was preparing a "containment plan" for the city of Agra -- home to the Taj Mahal -- where a cluster of cases has been identified.

Prime Minister Narendra Modi said "there is no need to panic" earlier this week on Twitter and advised the public that the government is "working together" to stop the virus from spreading further.

Modi said Wednesday he would not attend next week's Holi celebrations -- the Hindu festival that marks the start of spring in which revelers throwing bright-colored powdered paint -- because of advice from experts to avoid mass gatherings. Holi festivities at the presidential palace were also canceled.

Authorities around the globe are taking similar steps now that the virus has spread to more than 80 countries and territories across every continent except Antarctica. Since it was first identified in the Chinese city of Wuhan in December last year, major self-sustaining clusters have formed in South Korea, Japan -- which recorded its biggest one-day increase of cases on Wednesday, with 33 new patients identified -- parts of Europe, Iran and the United States.

The vast majority of cases, however, are still in mainland China. The country's National Health Commission (NHC) reported that as of the end of the day Wednesday, 3,012 people had died and 80,409 cases had been confirmed. More than 52,000 patients have recovered and been discharged from hospital, per the NHC.

The virus' spread is also having significant knock-on effects on the global economy and daily life. Markets worldwide have reacted negatively, forcing finance officials and central banks to take action. Government agencies and private companies across the globe have canceled or postponed public functions.

Movie studios MGM and Universal have postponed the release of the latest James Bond movie; authorities in Japan and Italy have closed major tourist hubs like the Tokyo Skytree or Milan's Teatro alla Scala; theme parks around the world have been shuttered; governments have shut schools; and sporting events in country's most affected areas are sometimes being played behind closed doors.

Travel and tourism has been among the most affected industries. The outbreak could cost the airline industry as much as $113 billion in lost revenue, according to the International Air Transport Association (IATA).

IATA said global passenger growth for January 2020 was the slowest in nearly a decade, climbing only 2.4% from a year earlier, because of the novel coronavirus outbreak.

"January was just the tip of the iceberg in terms of the traffic impacts we are seeing owing to the COVID-19 outbreak, given that major travel restrictions in China did not begin until 23 January," Alexandre de Juniac, IATA's Director General and CEO, said in a statement.

United Airlines became the first airline to cut its US flight schedule on Wednesday, as passenger concerns about the coronavirus has caused a sharp drop in demand. UK airline Flybe collapsed Thursday as a slump in demand for flights due to the outbreak dealt the final blow to the struggling carrier.

Passenger uncertainty about travel has prompted major US airlines and some international ones to suspend or waive certain change and rebooking fees, which itself is hurting their revenue.

Executives from most of the major airlines, including United CEO Oscar Munoz, met with US President Donald Trump and Vice President Mike Pence Wednesday to discuss the impact of the coronavirus on air travel and how to coordinate activity between the industry and the government.

In response to a question, President Trump said he did not believe that the airlines would need a bailout, similar to the one they received in 2001 in the wake of the 9/11 terrorist attacks.

"Don't ask that question please, because they haven't asked (for) that. I don't want you to give them any ideas," said Trump about the possibility of a bailout. He said the idea had not been discussed. He also said he believes flying is safe.

"Where these people are flying, it's safe to fly," he said.

US attempts to increase testing

On Wednesday, the Vice President said the Trump administration is prioritizing making it easier for Americans to be tested for the virus.

"Our objective is to make tests available broadly to the American public. We want to make sure the American people can go to their doctor, can go to the local MedCheck or CVS, and obtain access," said Pence, who Trump tasked with overseeing the federal government's coronavirus task force.

Speaking at a news conference, Pence highlighted the various steps the government is taking to stop the virus from spreading further.

"The risk to the American public of contracting the coronavirus remains low. But at the President's direction, we are bringing the full resources, not just of the American government, but the American economy, to make sure that in our meeting with the pharmaceutical companies, that we have -- that we're developing vaccines, which may not be available for another year or year and a half, but we're also developing therapeutics that we believe could be available in fairly short order for people that are struggling with coronavirus," he said.

Nearly 160 cases have been identified in the United States and 11 people have been killed. Ten of the fatalities occurred in Washington state, where many of the patients and victims have been connected to a nursing home in the Seattle suburb of Kirkland. A federal disaster medical assistance team is set to arrive in Kirkland Thursday to help staff at the facility.

The other fatality is in California, where Gov. Gavin Newsom has declared a state of emergency. Those two states have so far been the hardest-hit, with Washington detecting at least 39 infections and California at least 36.

Newsom also said that one cruise ship off the coast of California, the Grand Princess, has been affected by the outbreak, with 10 crew members and 11 passengers showing virus symptoms. The ship is being held at sea while authorities test for the virus.

Cruise ships can be especially vulnerable to viral illnesses, like the coronavirus. Hundreds of people were infected while aboard the Diamond Princess, a cruise liner that was forced to quarantine most of its guests off the coast of Japan. Forty-six Americans on board the ship who were repatriated from Japan have tested positive for the virus, according to the CDC.

"There are unique challenges, our experts tell us, in a closed environment" like a cruise ship, Pence said at his Wednesday briefing.

The House of Representatives passed an $8.3 billion coronavirus response package Wednesday afternoon, far higher than the $2.5 billion the White House requested. Despite that, however, the White House is expected to back the deal. The Senate is scheduled to vote on the measure Thursday.