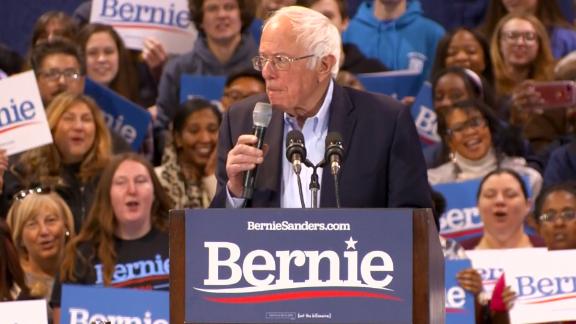 With time running short before Super Tuesday, Vermont Sen. Bernie Sanders and the other Democratic presidential hopefuls have been barnstorming Texas. Just as a new CNN poll shows Sanders leading former Vice President Joe Biden by 9 percentage points, many Democrats here have deep concerns that not only would the Senator lose to President Donald Trump, but he could also doom down ballot candidates in the Texas House and in the US Congress.

And their concerns may be legitimate. For Democrats to win in Texas -- up and down the ballot -- young and old voters of all races and ethnicities would have to come together. And, right now, Sanders has not shown how he would assemble such a coalition.

But it's even more complex in Texas. Politics is often about backlash. And while opposition to some of the Republican policies pushed in Texas in recent years may have fired up voters who would support Sanders in March, those same voters may be sorely disappointed come November when Republicans show up in force to oppose the self-proclaimed "Democratic Socialist" who wants to ban fracking in the nation's biggest oil and gas state.

Even in close elections, there are simply more Republican voters in Texas than Democrats -- and voters loyal to both parties work in the oil and gas industry, particularly in Houston and South Texas. That's part of why Texas' minority party candidates must win some support from Republicans to even come close to winning a statewide race.

The consequences of losing legislative seats would be dire for Texas Democrats, setting the stage for Republicans to fully control the drawing of political boundaries in redistricting in 2021, just as this state is set to likely gain as many as three new seats in Congress thanks to explosive population growth. While Democrats here haven't lashed out at Sanders, it is telling that no elected officials outside the local level in Texas have endorsed him.

Still, now that Sanders has proven he can win big with Latinos through his decisive victory in Nevada, it's worth explaining how Texas Republicans, led by Gov. Greg Abbott, helped motivate perhaps the largest group of young Latino voters in this state's history.

In 2017, the Texas legislature passed a divisive immigration crackdown, helping to mold a new Texas political environment in which Latinos are more active than I've seen in roughly 20 years. The ban on so-called "sanctuary cities" included a "show me your papers" provision, which allows Texas police officers to question the immigration status of those they encounter on the street. Previous Texas Republican governors, including Rick Perry and George W. Bush, stood fast against the urges of the base of their party to enact such a law. In 2017, Gov. Abbott demanded the bill on his desk.

The long-term effect of the immigration crackdown might be similar to California's Prop 187 of decades ago, denying public benefits to undocumented immigrants. As NPR put it, Prop 187 "Damaged GOP relations with immigrants" and helped pave the way for Democratic dominance in that state. It is anecdotal, but many young Latinos now working for Democrats in Texas have told me the immigration bill signed by Abbott is the reason they are working in politics today. What's not anecdotal is the rise in Latino participation in the following election.

In the 2018 US Senate race between then-Rep. Beto O'Rourke and Republican Sen. Ted Cruz, the CNN exit poll showed Latinos making up 26% of those who cast ballots. That's up from 24% in 2016, a presidential year. Of those Latinos casting ballots in 2018, 64% voted for the Democrat. And they appear to have voted that way down ballot as well, because, when the votes were all in, there were 12 new Democrats in the Texas House, two new Democrats in the Texas Senate and two congressional seats had been flipped.

Anti-immigration measures turn off most Hispanic voters. What turns many of them on is economic stability for their families. As a Democratic operative in Houston told me, "Health insurance is Latinos' love language." The Culinary Union in Nevada tried, and largely failed, to blunt Sanders' appeal to those voters based on how health care should be provided. In Texas, there aren't large unions in any position to even make an argument against Sanders' Medicare-for-All pitch.

So, as the Vermont senator builds momentum, tension is mounting between newer Texas Democrats, young and Latino, who seem more open to nominating him and veteran Democrats, typically white and older, who see him as a potential threat. Glenn W. Smith, a Democratic consultant who worked on former Texas Gov. Ann Richards' winning campaign years ago, crunched the numbers on Sanders' argument that young voters, in particular, will put him over the top.

Smith pointed out that even if Sanders was able to greatly boost the percentage of voters who are 45 and younger and raise overall turnout to unprecedented levels, he'd still lose the general election in Texas. In 2016, 39% of the electorate here was 44 or younger, per CNN exit polls. If that was raised to 55% and overall turnout hit an unprecedented 10.5 million voters, Trump would still defeat Sanders. (10.5 million votes would be unprecedented, Smith noted, given that 8.9 million voted in 2016 and even fewer Texans voted in 2012.)

Academic research published this week supports Smith's calculations. It shows that public polling indicating Sanders is just as electable as more moderate candidates "relies on some remarkable assumptions about youth turnout that past elections suggest are questionable," per the authors of the study. They wrote, "For Sanders to do as well as a moderate Democrat against Trump in November by stimulating youth turnout, his nomination would need to boost turnout of young left-leaning voters enormously."

Younger, idealistic Democratic Texas voters who largely prefer Sanders have only the O'Rourke-Cruz race as a frame of reference for what a feelgood campaign looks like -- and, remember, O'Rourke still lost. But that was prior to his statements on the presidential campaign trail in favor of confiscating certain firearms and punishing churches through loss of tax-exempt status if they disagree with gay marriage. Before he took those more liberal positions, more than 400,000 Texans voted for both O'Rourke and Gov. Abbott, a conservative. Would they do that now?

Meanwhile, older, more pragmatic Democrats who might prefer a candidate like Biden, former Mayor Mike Bloomberg, former Mayor Pete Buttigieg, Minnesota Sen. Amy Klobuchar or even Massachusetts Sen. Elizabeth Warren can look back to the days of how good it felt to actually beat Texas Republicans.

Eager to act, Biden and Democrats leave Republicans behind

First of its kind pharmaceutical plant coming to Austin

Golf on the upswing during pandemic

A sweeping police reform bill is passed in the US House

Creating an 'IT ecosystem' in North Iowa