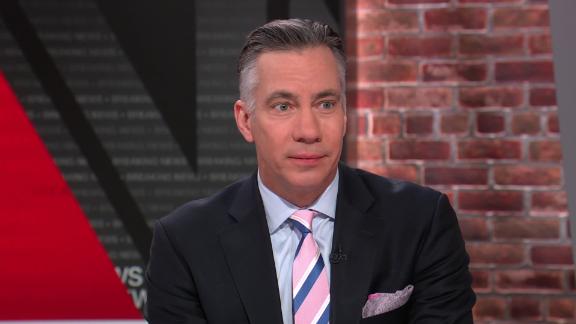 CNN's Chief National Security Correspondent Jim Sciutto says that President Trump's selection of Richard Grenell, who has very little national security experience, to be the next director of national intelligence is an "egregious" choice.

Please, Mr. President, re-think this one. Richard Grenell, as close a friend and ally as he might be, is very much the wrong man at the wrong time as acting Director of National Intelligence. He is a catastrophe-in-waiting who will be in a position he is totally unqualified to hold, one that is central to America's national security.

Most alarming, however, is the reported back story about just how Grenell came to be pitched at the last moment into this job for which he is all but utterly unqualified. The New York Times reported Thursday afternoon that Trump exploded at Joseph Maguire, a veteran intelligence operative who was the current acting DNI after it became known that one tell-it-like-it-is Maguire deputy told a bipartisan congressional committee, including Trump's archnemesis, Adam Schiff, that Russia is back at it again -- pushing Trump's re-election. A source familiar with internal discussions said White House officials saw Grenell as a stopgap -- Maguire's time in the job as an acting DNI was limited, and Trump was dissatisfied with Maguire because of this intelligence briefing.

True, Ambassador Grenell has demonstrated in his years as Ambassador to Germany a clear ability and willingness to defend and promote the Trump agenda. But the role of the DNI, as defined by the Intelligence Reform and Terrorism Protection Act of 2004 that created the position, requires this individual to "establish objectives and priorities for the intelligence community and manage and direct tasking of collection, analysis, production, and dissemination of national intelligence." Indeed, the DNI's office is specifically mandated to be situated outside not only the offices of any of the 17 disparate intelligence agencies it oversees but even specifies that it "shall not be located in the Executive Office of the President."

There are good reasons for this and that have motivated the choice for the office by every president since it was created in the wake of 9/11—widely seen as a byproduct of the toxic lack of coordination between intelligence agencies. The DNI must be seen as a neutral arbiter among America's vast intelligence community that ranges from the Central Intelligence Agency (CIA), Defense Intelligence Agency (DIA) and National Security Agency (NSA) to the FBI, DEA and intelligence units of the Departments of State, Energy, Homeland Security and Treasury.

The skill set required for the job is also quite clear. He or she must be a mediator, bringing often-conflicting people and ideas together to reach a consensus or at least a viable menu of choices for the president's final decision on life-or-death matters. But above all, this individual must be deeply conversant with the arcane language and practices, sources and methods that make up the core mission of the intelligence communities. Some DNIs have come from the community itself. The most recent and effective, Dan Coats, served for years as a leading member of the Senate Select Committee on Intelligence and the Senate Armed Services Committee.

Rick Grenell brings none of this to the table. Trained largely as a spokesman and advocate, from his first arrival in Germany as ambassador Grenell managed to alienate much of the nation where he was designated as the leading American representative. Two days after his arrival, Grenell, with no diplomatic or managerial background, tweeted to his new hosts: "As @realDonaldTrump said, US sanctions will target critical sectors of Iran's economy. German companies doing business in Iran should wind down operations immediately." This was only the launching point of a string of intemperate comments that were taken as public threats—an effort to burn rather than build bridges. Yet Germany is not only one of America's most valuable trading and security partners, it also is a most valuable intelligence ally as well—the Bundesnachrichtendienst (BND) has cooperated closely with the CIA for decades. Grenell spent considerable effort in Berlin warning that Germany's use of Huawei technology in 5G telecom networks would mean the "US won't be able to maintain the same level of cooperation with German security agencies."

Grenell does have one key attribute for a DNI—the President's full and utter confidence. The problem is that he may very well be even more ignorant of intelligence matters than the man he will be advising. And, while the position is seen as determinedly non-partisan, Grenell is very much a polarizing figure, which no doubt is one attribute that appeals especially to the President. Coupled with a long history of nastiness and misogyny that nearly torpedoed his Senate confirmation as ambassador to Germany, his is a resume that bodes ill for this most sensitive of administration positions.

The DNI is supposed to present to the president the best and most objective analysis of the world each day and options, especially in moments of crisis, for presidential action. It is the National Intelligence Council, over which the DNI presides, that is responsible for the PDB — the President's Daily Brief -- which, as its job description states, "organizes the Intelligence Community' daily intelligence reporting to the President." In 1965, I was offered a job (which I ultimately declined) on the recently-formed PDB desk, then located at the CIA. At the time, I was a young college journalist and my background was what they were seeking— an ability to report objectively and accurately on the news (often highly classified) for a single key reader, the president. There is nothing in Grenell's background that suggests any sense or understanding of the nature or value of objectivity.

My overwhelming concern goes even more deeply to the heart of the inevitable crises that will ensue in any Trump presidency. When there is a menu of choices for any specific action, will Grenell reflexively skew his advice to the most extreme, or the most measured and reflective of the ultimate goal? This was the problem when Trump suddenly authorized the assassination of Iranian General Qasem Soleimani. As The New York Times reported in January: "Some Pentagon officials were shocked that the president picked what they considered the most extreme option and some intelligence officials worried that the possible long-term ramifications were not adequately considered, particularly if action on Iraqi soil prompted Iraq to expel American forces."

The function of the DNI should be to offer sober analysis deeply rooted in the vast trove of facts that our $60-billion-a-year intelligence machine can muster. Richard Grenell hardly seems to be the individual tailored to fill that role.

Growing tension in Minneapolis as trial looms in Floyd death

Some patients develop swollen lymph nodes after getting COVID vaccine, which can be mistaken for a potential breast cancer diagnosis