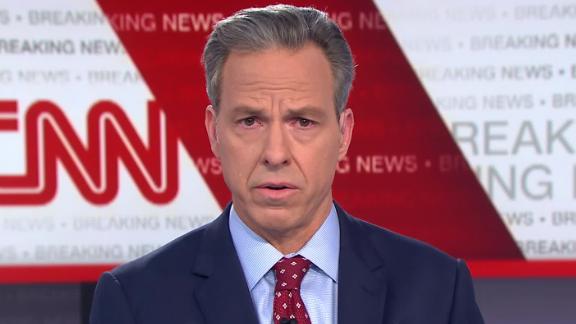 After President Trump attacked federal prosecutors working on the Roger Stone case, CNN's Jake Tapper notes that those prosecutors could make more money working in private practice rather than serving the government.

Maybe the most insidious effect of Donald Trump's presidency has been his increasingly overt influence on American justice.

The US system was set up according to the principle that no one is above the law, not even the most powerful person in the land. But Trump has steadily chipped away at that. Each of these things feed into each other:

- Refusing to release his tax returns and other financial information;

- Having his lawyers insist that he can't be charged with a crime while he's in office, even if he did shoot someone on Fifth Avenue;

- Asserting absolute immunity from any type of congressional oversight;

- Having his lawyers argue during his impeachment trial that he can't actually be abusing power if it's to help himself get re-elected;

- And now, without even trying to hide it, tipping the scales of justice to help his friends.

Hands on the scales -- He's interfered in military courts to help Navy SEALs accused of war crimes. He's pressured the military to seek retribution against an Army officer who told the truth under oath. He's bullied judges, tried to launch politically motivated investigations and just generally questioned the whole concept of impartiality.

His most willing accomplice in undermining the rule of American law appears to be Attorney General William Barr, who testified during his confirmation hearings that he would be independent of Trump and his whims.

"I feel I'm in a position in life where I can do the right thing and not really care about the consequences," Barr told senators then. "I can be truly independent."

But the view of Barr's performance from the outside suggests the attorney general is the President's prime enabler.

The current calamity started with Trump tweeting on Tuesday that his own Justice Department's sentencing recommendations for his informal adviser Roger Stone -- who was convicted of lying to Congress and witness tampering during the Russia investigation to protect Trump -- was "horrible and very unfair."

After Trump tweeted Tuesday, Barr's Justice Department hopped to attention to ask for a lighter sentence for Stone. A judge will have the final say, but four career prosecutors immediately quit the case, making their displeasure known.

He also attacked the judge in the case, Amy Berman Jackson, on Twitter.

Then came the final hammer: The White House abruptly withdrew the nomination of Jessie Liu, the former US attorney in Washington, DC, for a top Treasury job, days before her confirmation hearing. Liu oversaw the Stone prosecution as well as a criminal inquiry into former FBI official Andrew McCabe, an ally of former FBI director James Comey, who has been a repeated target of Trump's ire. (McCabe is now a CNN contributor.)

"This kind of thing, to see the government and the people who tried the case to put in a sentencing recommendation and have it literally flipped within 24 hours by political bosses, and it looks like based on the president's tweet, undermines everything about the rule of law and really concerns me," said Anne Milgram, an NYU law professor and former attorney general of New Jersey.

She said what Trump has done to the Justice Department will have a lasting effect on Americans' faith in the system.

Trump thinks he has friends and enemies, but nothing in between. He has repeatedly railed since taking office against the "deep state," and many in government as well as his political allies have contorted themselves to align themselves with their boss.

His friends are rewarded with special treatment by the Department of Justice or influence beyond their experience while his enemies -- in many cases, career public servants -- are driven from government, shunned, threatened -- and sometimes, all three.

It's a modern-day spoils system and, ironically, the exact kind of corruption Trump promised to root out of Washington when he took office.

That favoritism is, according to Gergen, "compromising the Department of Justice in a way we have not seen I don't think since Watergate and even then I thought it was more in-bounds."

We've seen a consistent pattern play out throughout Trump's time in government, at the State Department, the Pentagon and elsewhere. But just in the past few weeks, there's a trail of revenge and reward that is unlike anything we've seen in previous modern presidencies.

Here is a brief taxonomy of Trump-world:

Roger Stone -- friend. His reward? Trump can someday pardon his longtime political adviser Stone for his conviction for lying to the Mueller probe. For now, his tweets just influenced the Department of Justice to seek a lighter sentence.

Lt. Col. Alexander Vindman -- enemy. His revenge? Trump had Vindman, who complied with a subpoena and testified at impeachment hearings removed from the White House. He said the military should punish him even though the military has promised Vindman would suffer no retribution for his honesty.

Mitt Romney -- enemy. His revenge? Trump's son said Romney should be kicked out of the party after he voted to convict Trump on one of the two impeachment counts he faced. Romney's niece, who chairs the Republican National Committee, publicly sided with the President over her uncle. Conservative supporters said Romney wouldn't be invited to the annual CPAC conference in part because they feared for his safety.

Judy Shelton -- trying very hard to be a friend

Barr was a late addition to the Trump Cabinet, but he's been working hard on Trump's behalf since becoming attorney general:

He made clear to special counsel Robert Mueller during the Russia investigation that Trump, as President, could not be charged with a crime.

He slow-walked the release of the Mueller report to make his boss look better.

He went on a global errand to poke holes in the Mueller report.

Thanks, bud -- And Barr got praise in the form of a Presidential tweet Wednesday morning, congratulating him for "taking charge" of the Stone case.

The swamp according to Trump

While the question of what is or isn't corruption is perhaps debatable, it is a statement of fact that Barr is on Trump's friends list. And that's not the way it's supposed to work.

"There is no law saying the president shall not interfere with the justice department, but that is... a long-standing crucial norm that has been observed and respected by presidents certainly throughout my lifetime of both parties," said Elie Honig, a former federal prosecutor and CNN legal analyst. "Now we are seeing that norm, of all the norms this president has shattered, this is the most damaging one."

This is who Trump thinks is in the swamp. Trump dismissed the four prosecutors who quit the case that convicted his compadre as being part of the "swamp" he promised in 2016 to drain.

And this is the inverse way of Trump's thinking. In recent weeks he has drained military officers like Alexander Vindman, diplomats like Marie Yovanovitch, prosecutors from the DC US attorneys office.

It's hard not to objectively view what he's poured back into the swamp as anything but corrupt.

Voters have a choice about the rule of law. Amanda Carpenter, an anti-Trump Republican, said Democrats should use the assault on the rule of law in 2020.

"The message that he is sending very clearly today is that someone like Roger stone who lies, who cheats to win elections, to obstructs justice, who makes false charges is good and is deserving of special treatment while someone like Lt. Col Vindman, who serves his country, has shrapnel in his body, who responds to subpoenas, who tells the truth, is bad."

Republicans out in the country might respond to this argument, she said.

"At the end of the day in 2020 are people going to remember the parade of diplomats and public servants that Donald Trump has dismissed unceremoniously? Probably not. But are they going to look at Donald Trump and say, hey, I trust you to treat people equally and fairly. And the answer is no."

Democrats, she said, could make a winning argument in November simply by promising to restore law.

This is how strongmen happen

Gergen issued an alarming warning on CNN when he talked about this reward and retribution approach to governing.

He said the way open societies become closed is by disruption of the rule of law.

"In many countries around the world, people have been elected democratically to lead a nation, have often become strong men. One of the ways they get there is by suppressing voices of dissent and controlling the judicial system, law enforcement system. That is the way you gain power and get to do what you want to do," he said.

In Watergate, attempts to influence justice were confined to the Watergate scandal, Gergen said. But Trump is now exerting a much more wide-ranging influence over the Department of Justice:

"This is wide in scope. It's almost every big decision that's coming through the Justice Department now has to be sent through the White House and checked out with the president and then do the President's bidding. We've never -- we didn't see that in Watergate," Gergen said. "This is why this is more sinister."

What are we doing here?

The American system of government has been challenged to deal with a singular President and a divided country that will decide whether he should get another four years in the White House.

Stay tuned to this newsletter as we keep watch over the Trump administration, the 2020 presidential campaign and other issues of critical interest.

How germs work, and viruses spread