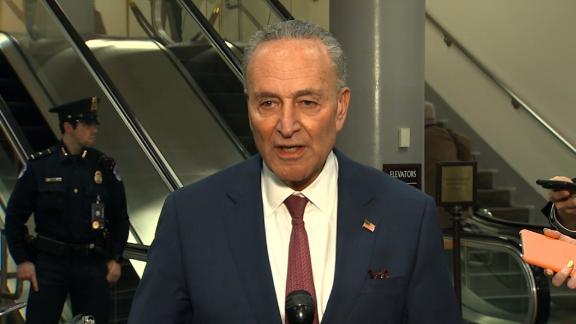 Senate minority leader Chuck Schumer comments on the 49-51 failed Senate vote to compel witnesses and documents for the remainder of the impeachment trial.

The Trump impeachment trial has been gripped by drama surrounding witnesses, particularly former national security adviser John Bolton: Will he or won't he testify?

But there's a better question: What exactly would be the point? Thanks to revelations in The New York Times about his book, which will be out in a few weeks, we already know pretty much what he might say.

While testimony from Bolton and other potential witnesses might extend the impeachment circus for a few days or weeks, depending on how the President's claims to executive privilege are resolved, no new and substantive information relevant to the alleged Ukrainian shakedown or other offenses outlined in the two articles of impeachment is likely to emerge.

In the free-flowing information river of Twitter, Facebook, newspapers, podcasts and 24-hour cable news, senators undoubtedly already know most of what live witnesses would have revealed.

The Republicans could argue that not having Bolton testify hurts them more than it hurts the Democrats because his account is being largely taken by the media and political world as fact.

After all, The New York Times never published a cross-examination of Bolton to go along with the claims allegedly asserted in his manuscript. No hard information is currently available on how much his publisher is paying him for his backroom stories about the President who fired him. In a normal trial or even a Senate trial, Bolton's veracity would be tested in the crucible of cross-examination.

Of course, no tears need be shed for the Republicans who have the votes to call Bolton for the purpose of discrediting him if they wish. But what would be the point? The question-fest now in progress shows both parties are mostly locked in position, suggesting that a swift acquittal of the President is on the horizon.

No, the Senate "trial" is more like professional wrestling -- hyperkinetic drama with fixed story lines and a predetermined outcome.

That's partly why the participants have been so lax in their behavior. The access to outside "inadmissible" information in the trial has been staggering. The senators have been deprived of cell phones and other electronic devices and nourishment other than milk and water to keep them focused. When breaks have occurred, however, they've made a bee line for the television cameras to explain their views. They post on social media and make podcast appearances.

Ted Cruz even has his own impeachment podcast, the popular "Verdict with Ted Cruz," where he posts his analysis of the trial every day. This routine, senatorial press-pandering conduct would cause a mistrial and a contempt citation in a normal criminal trial.

For their part, the Democrats have said they seek a fair trial and proclaimed that "a trial with no witnesses is not a trial." What they fail to admit is that, all senators, R and D, already had their minds made up about all the bad stuff -- real and rumored -- that they've heard about Trump. Some have participated in the spread of such information even before Nancy Pelosi handed out souvenir pens to the key participants in the House impeachment proceedings.

In a real trial, it is possible to change the location -- the "venue" -- of the trial and even sequester the jury to ensure fairness and a verdict based only on properly admissible evidence produced in court.

In contrast, the only venue for an impeachment trial is in the Senate chamber, where no rules limit exposure to outside media regarding the accused.

Their ultimate vote on guilt or innocence on the articles of impeachment is a simple yay or nay recorded by the Senate clerk. No explanation is required, and there will be no cross-examination of senatorial jurors by the chief justice on the materials the senators considered before they voted.

Yes, they will be instructed to consider only the information presented by the House managers and the President's defenders in the Senate chamber. But there is no way to erase their senatorial memory banks of the gossipy material they heard or even discussed after leaving the Senate chamber every day.

In a real trial, when the witness strays and reveals something which is not legally admissible, the judge will "strike" the testimony and order the jury to disregard what they have heard. Trial lawyers often ruefully observe that such an instruction is meaningless because, "You can't un-ring a bell." No one is making any attempt to "un-ring" the senatorial bell in the Trump trial, and it's a very big bell.

In the end, Trump will win because the Republicans have the votes, but he will come away from the whole process damaged.

Joe Biden, on the other hand, may be hurt even more. Though no criminality on his part has been proven, he was in a clear conflict-of-interest position when the Ukrainians started paying big bucks to his son, Hunter Biden. The then-Vice President Biden should have declined further involvement with the Ukrainians and salvaged his reputation.

Hunter may have needed the money and the "job," but it will probably cost his father the job he always wanted, President of the United States. When that happens, watch for Michael Bloomberg's rise in the polls as he spends billions of dollars of his personal funds to become the viable Democratic alternative to Trump.

One arrested for Friday night stabbing in Howard County

Updated CDC guidance acknowledges coronavirus can spread through the air

Message after Dooley's Pub forced to close: 'We're in a pandemic! Act like it'

Iowa teacher on leave for 'pretend you are a slave' assignment

More students not returning to college