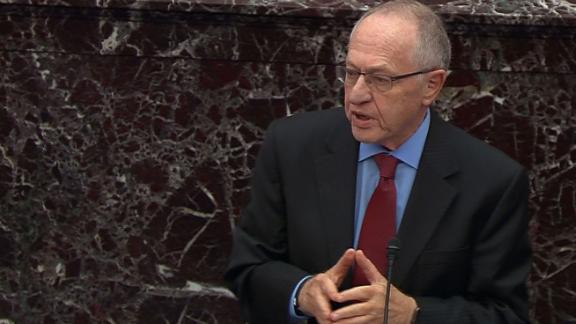 Alan Dershowitz, a member of President Donald Trump's legal team, argued on the Senate floor that a politician trying to win reelection is acting in the national interest, and therefore a quid pro quo aimed at boosting reelection chances cannot be impeachable.

"When the President does it, that means it is not illegal." So said Richard Nixon in his famous post-presidency interview with David Frost.

Nixon was no JFK. His words did not soar; they aren't etched in marble the way Kennedy's are. His prose was more prosaic. But when Nixon tried to justify criminal conduct by claiming a president is above the law, he earned his place in the compendium of deathless presidential quotations.

Of course, we remember Nixon's words for the same reason we remember Louis XIV saying, "L'etat c'est moi" -- because both are an outrageous assertion of absolute power. Free people for centuries have rebelled at the notion that the ruler is above the law. In the Anglo-American tradition, the concept that even a king must be accountable to the law goes back to the Magna Carta in 1215.

In his defense of President Donald Trump, attorney and Harvard Law School professor emeritus Alan Dershowitz added a third variant to Nixon and Louis XIV: If a President thinks his re-election is in the public interest, anything he does in pursuit of his re-election is legal.

Seriously. As part of the Senate impeachment trial, Dershowitz was called upon to answer a question about the legality of a quid pro quo -- that well-worn Latin phrase that means, literally, "this for that." House Democrats have impeached President Trump for allegedly seeking to exchange $391 million in Ukrainian military aid (this) for Ukraine announcing it would investigate supposed corruption by his political rival, former Vice President Joe Biden and his son (that).

To a normal person, a public official making the performance of his or her public duties contingent upon receiving some personal gain looks like solicitation of a bribe. ("I'll put out that fire, ma'am, if you give me title to that Corvette in the driveway.") But not Professor Dershowitz.

I did not go to Harvard Law, but I did go to the University of Texas School of Law, where I studied criminal law and constitutional law, but never dreamed a legendary legal mind would set them both ablaze on the Senate floor.

The Dershowitz Doctrine would make presidents immune from every criminal act, so long as they could plausibly claim they did it to boost their re-election effort. Campaign finance laws: out the window. Bribery statutes: gone. Extortion: no more. This is Donald Trump's fondest figurative dream: to be able to shoot someone on Fifth Avenue and get away with it.

Allow me to use a technical term, one that I'm pretty sure is in the Magna Carta: this is bonkers. It is ludicrous. Beyond that, it is frightening. The desire of politicians to win elections is overpowering, which is precisely why we need laws to rein them in.

Professor Dershowitz is a brilliant legal advocate. But in this instance, he is not channeling Blackstone or Harlan Stone or even The Rolling Stones. He is, like so many Trump supporters, saying the quiet part out loud. Mr. Trump, who so admires Russia's soon-to-be "Supreme Leader" Vladimir Putin, as well as other autocrats like Turkey's Erdogan, Egypt's Sisi, and North Korea's Kim Jong Un, appears to want to join them in the autocrats' club.

All he seeks is dictatorial power. That's all. By now we've come to expect that. But it is truly outrageous that the Republican Party, the party of limited government, seems so compliant in Trump's quest for unlimited power.

During the Constitutional Convention in Philadelphia, Benjamin Franklin was asked by a citizen what kind of government our new nation was to have. "A Republic," Franklin said, "if you can keep it."

Trump and his enablers now openly seek to put this President above the law, turning Franklin's admonition on its head: giving us a dictatorship, if we allow it.

State board places Clear Lake chiropractor on probation for 3 years

Is the City of Rochester paying men and women equally?

LWVMN asks for "truth and consequences" for state lawmakers