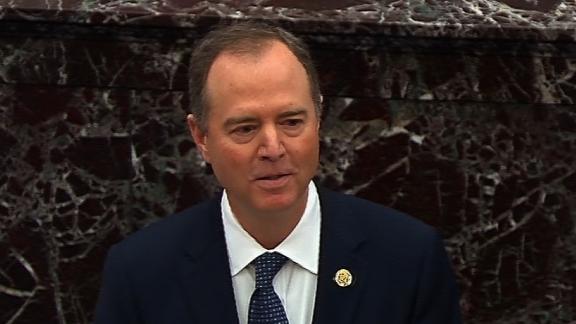 During the impeachment trial of President Donald Trump, Rep. Adam Schiff (D-CA) said that if American democracy falls it will be the autocrats who fill the void, stating Americans have less freedom this year than previously.

CNN Opinion is curating commentators' smartest takes on the second day of President Donald Trump's Senate impeachment trial. The views expressed below are their own.

Raul Reyes: He did not come to play

Democratic Rep. Adam Schiff did not come to play. On Wednesday, he laid out a strong case for why senators should vote to impeach and remove Donald Trump from the presidency.

On a strategic level, Schiff's presentation was masterful: it was eloquent, thoughtful and -- most importantly -- restrained. While he invoked everyone from Alexander Hamilton to John F. Kennedy, he never slipped into histrionics or hyperbole, which any trial lawyer knows can backfire. Instead, he methodically went through a timeline of the President's alleged improper conduct.

Given the sheer amount of ground that Schiff covered in two-plus hours, no senator can honestly claim to not know or not have heard about most aspects of the impeachment inquiry. Schiff laid it all out for the Senate and for the public (of which 51% favors impeachment, per a recent CNN poll).

Very smartly, Schiff appealed to senators' and viewers' best instincts, saying: "The American people want a fair trial. They want to believe the system of government is still capable of rising to the occasion. They want to believe we can rise about party and do what's best for the country." This statement, by the way, is supported by national polling that finds most Americans want witnesses and new testimony allowed into the impeachment inquiry.

Notice that Schiff did not have to resort to demonizing those who perhaps did not agree with him (indeed, he comported himself with the dignity required in such a grave and consequential matter).

In fact, his presentation was especially strong when he played video clips of other people, including Trump, whose statements bolstered the House Democrats' case for impeachment. So just in case anyone had forgotten, we again got to see acting White House Chief of Staff Mick Mulvaney basically admitting to a quid pro quo (regarding the withholding of Ukraine aid in exchange for an investigation into the Bidens) and telling reporters to "Get over it."

While the President is on trial in the Senate, Schiff was careful not to make his opening remarks all about Trump. Much more is at stake, Schiff noted, including America's national security interests, the integrity of our elections and the permissible conduct of future presidents.

One of Schiff's gifts is his ability to distill complex legal and constitutional arguments down to their essence. Should any president be allowed to solicit foreign interference in our elections? Is it okay for the President to refuse to cooperate with Congress? On both counts, Schiff clearly showed why the only reasonable answer is no.

Raul A. Reyes is an attorney and a member of the USA Today board of contributors. Follow him on Twitter @RaulAReyes.

As Americans attempt to see through the haze of President Donald Trump's Senate impeachment trial, one thing is clear: patriots and pettifoggers are conducting the process.

And, in the end, partisans will determine the verdict.

The Senate chaplain was right to say, "Patriots reside on both sides of the aisle." And Chief Justice John Roberts was correct in calling out both sides for their late-night use, Tuesday, of sniping, which was beneath the decorum demanded by the proceedings.

But the reality, beyond all the posturing, is that Senate Majority Leader Mitch McConnell has the ball, and McConnell remains firmly in Trump's court. Democrats need to realize they had their chance to make an overwhelming and bipartisan case for impeachment -- and they failed.

While Trump's July 25 phone call with the Ukrainian president regarding the withholding of military aid in exchange for investigations into the Bidens was certainly inappropriate, it is not worthy of impeachment. And the House inquiry and Democrats' statements have yet to persuade otherwise.

House managers began their opening arguments Wednesday with an effective case for their side. But then Rep. Adam Schiff, lead impeachment manager, touting crushing evidence to support the two articles of impeachment -- abuse of power and obstruction of Congress -- said additional testimony and documents are needed.

If House Democrats had met their constitutional threshold for a conviction, they would not need additional information. They realize the only potential for an impeachment game-changer is additional evidence -- and, ideally, witnesses.

Here's the thing, though, House members could have subpoenaed Bolton already. They did not, and they should not expect the Senate to do the job they failed to do.

It'll be several more days before we know if or when witnesses will be introduced into the trial. For now, we will likely see more pettifogging before what seems more and more likely -- an acquittal.

Alice Stewart is a CNN political commentator, Resident Fellow at the Institute of Politics at Harvard University and former Communications Director for Ted Cruz for President.

Democratic Rep. Adam Schiff woke up this morning and finally remembered he was a gifted former federal prosecutor, rather than a partisan politician angling for headlines. The chair of the House Intelligence Committee and lead House manager delivered a highly persuasive opening statement, outlining the case against President Donald Trump.

He quoted the nation's first Secretary of Treasury Alexander Hamilton, who noted the young American democracy's need to control a man "bold in his temper...despotic in his ordinary demeanor" and whose "object is to throw things into confusion that he may 'ride the storm and direct the whirlwind." Any thoughts who Schiff might be alluding to?

For the best part of the remaining two hours, Schiff explained in detail why American democracy now and in the future needs to be on guard against a "despot" like Trump. More specifically, he argued that Trump was attempting to interfere in a democratic process in an effort to guarantee himself a second term. If the purpose of Trump's freeze on military aid to Ukraine was of a personal nature, such as extorting the Ukrainian president to dig up dirt on a political rival, Schiff said it would clearly amount to the "high crimes and misdemeanors" foreseen by Hamilton and the other founding fathers.

He even brought the entire Mueller investigation back into play, arguing that the Special Counsel's testimony to Congress July 24 that effectively closed the book on the probe could have unleashed Trump's reckless -- and impeachable behavior -- the very next day. Since Trump had gone unpunished for any improprieties related to the investigation of the 2016 campaign, Schiff reasoned, the President had been emboldened to tamper with the 2020 election. In short, the Mueller "exoneration," as Trump has referred to it, had become part of the motive for the Ukrainian shake down.

Overall, Schiff's presentation was focused, understandable and persuasive. Now all he needs is a jury—that is, the Senate-- willing to render "impartial justice" as required by oath. Unfortunately for him, this case was probably lost in jury selection during the last senatorial election.

Paul Callan is a CNN legal analyst, a former New York homicide prosecutor and of counsel to the New York law firm of Edelman & Edelman PC, focusing on wrongful conviction and civil rights cases. Follow him on Twitter @paulcallan.

Funeral for a Prince: Philip interred in Royal Vault

America's violent weekend: US rocked by back-to-back shootings across the country

Armed civilians try to keep the peace in Brooklyn Center

Sheriff's Office: Man in critical condition after crash where vehicle was launched 40 feet in the air

2 people arrested after a fatal mall shooting in Omaha, Nebraska