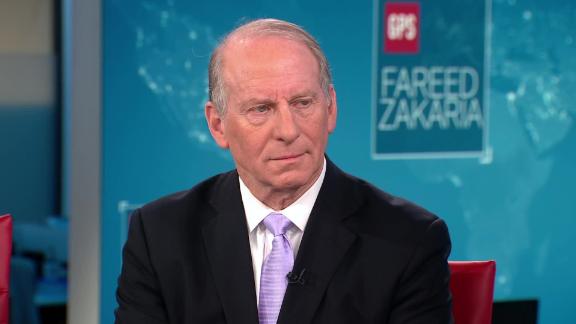 What does the death of Soleimani mean for U.S. interests in the Middle East? CFR President Richard Haass tells Fareed why it "totally changed the narrative."

Since his inaugural address three years ago, President Donald Trump has repeatedly touted his nationalist views and acted on a warped belief that the essence of American foreign policy is self-reliance. Now, for the first time in at least a century, America may be going to war all by itself.

Trump launched his attack on Iran's Quds Force commander Qasem Soleimani without the backing of American allies. Trump even kept British Prime Minister Boris Johnson out of the loop, according to the BBC. A United Nations expert on extrajudicial executions said the killing "most likely" violated international law, while UK foreign secretary Dominic Raab urged "all parties to de-escalate."

Trump has repeatedly alienated most of America's traditional allies and led them to question his style of leadership. He has railed against fellow NATO members, and attacked leaders like French President Emmanuel Macron.

And despite protests from US allies, Trump pulled out of the Iran nuclear deal while the remaining members -- Britain, France, Russia, China, and Germany -- pledged to maintain the agreement designed to prevent Iran from making a mad dash toward a nuclear weapon. And the Europeans have bent over backwards to find ways of neutralizing or circumventing the sanctions Trump subsequently loaded onto Iran.

In withdrawing from the nuclear pact, the Trump administration launched a maximum pressure campaign, and Iran reciprocated with a number of provocations including shooting down a US military drone in June 2019. Trump nearly responded with a military strike, before calling it off and writing that it was "not proportionate to shooting down an unmanned drone."

In 2013, when President Barack Obama contemplated a massive attack on Syria for use of chemical weapons during that nation's civil war, he backed off when the British, following an eight-hour debate in Parliament, refused to join in. The UK's support might have helped sway Congress, where Obama faced opposition from both parties.

The foundations for Britain's distrust were laid in 2003, when the UK supported the invasion of Iraq under the pretense that Saddam Hussein possessed weapons of mass destruction, and members of Parliament were wary of making the same mistake a decade later. As Prime Minister David Cameron admitted during the debate, "One thing is indisputable: the well of public opinion was well and truly poisoned by the (2003) Iraq episode and we need to understand the public skepticism."

George W. Bush convinced the world that Saddam was building a nuclear arsenal. Secretary of State Colin Powell even went before the UN Security Council with aerial photos purporting to show such advances. "My colleagues, every statement I make today is backed up by sources, solid sources," Powell said on February 5, 2003. "These are not assertions. What we're giving you are facts and conclusions based on solid intelligence." Of course, it turned out to be all utterly bogus. And Powell later acknowledged it was a blot on his record. By then, however, tens of thousands of troops fighting for America and its allies, had lost their lives, as well as at least 180,000 Iraqi civilians.

This time, Trump said, "Soleimani was plotting imminent and sinister attacks on American diplomats and military personnel, but we caught him in the act and terminated him." Since then, he has produced no such evidence.

By killing Soleimani, Trump has provoked a power that has powerful friends, and little to lose. Last month, Iran joined Russia and China on massive joint naval maneuvers in the Indian Ocean and Gulf of Oman. China has also proved to be a receptive customer for Iran's oil sales, despite Trump's efforts to crush the Islamic Republic's economy. Iran has also aligned with Russia in backing Bashar al-Assad's regime in Syria.

History would also suggest that Iran is fully prepared to unleash asymmetric warfare unlike any before seen. Its eight-year war with Iraq from 1980 to 1988 has shown it to be capable of assembling vast reserves of would-be martyrs in the form of human wave attacks unlike anything terrorist groups have been able to mount.

By his action, Trump crossed several critical red lines in the region, without notice and without backup. For the past two years, I have been studying the nature, structure and history of red lines for my forthcoming book, A Line in the Sand: Red Lines in Peace and War," to be published by Pegasus. I've found that the Middle East, particularly Iran, Iraq and Syria today have a density of red lines -- ranging from geographical borders to political, diplomatic or military realities -- replicated in no other region of the world, nor at any other moment in history. Each line must in some fashion be carefully communicated or structured so that all parties understand the reality and the stakes for violating them.

Certainly, Soleimani crossed a critical red line himself by going into Iraq where he was killed in a drone strike at a Baghdad airport. But Trump, by his response, crossed an even more dangerous one by escalating an already tense situation across a red line that was not its own -- without support from crucial allies.

Perhaps most troubling is the fact that Trump does not seem to be at all concerned about his lack of friends and allies, nor for that matter has he expressed any real plan of response beyond a tweeted threat of retaliation against 52 Iranian targets if Iran strikes back. Above all, he does not seem to have an exit strategy or end game in mind. Establishing or violating a red line is not an action to be undertaken cavalierly or without careful consideration as to the response or the outcome.

THE LANDING FOOD AND CLOTHING DRIVE