Donald Trump told the 'lie of the year' 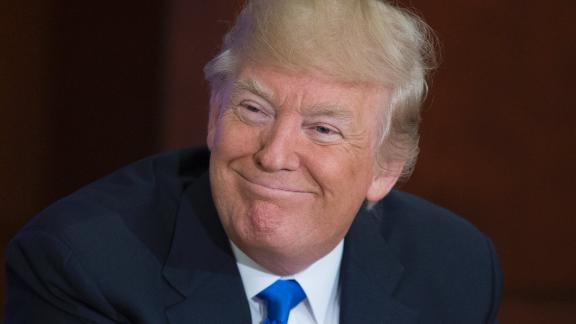 "Lie of the Year" goes to ... who else? Jeanne Moos reports on a Presidential whopper. But which one?

Every year, the fact-checking service PolitiFact picks the biggest whopper told by a politician. This isn't the standard-issue deception or misleading statement; this is a lie that has implications well beyond just the lack of truth. This is a lie for the ages. As PolitiFact puts it:

"The distinction is awarded to a statement that is more than ridiculous and wrong. The Lie of the Year — the only time PolitiFact uses the word 'lie' — speaks to a falsehood that proves to be of real consequence and gets repeated in a virtual campaign to undermine an accurate narrative."

Past winners for lie of the year include 2018's online efforts to discredit the gun control activism of students of Parkland, Florida and Barack Obama's false pledge in 2013 that "if you like your health care plan, you can keep it."

This year's biggest lie? President Donald Trump's repeated assertions that the Ukraine whistleblower got the story about his July 25 phone call with Ukrainian President Volodymyr Zelensky all wrong.

"Since the Sept. 26 release of the whistleblower complaint about his call with Ukraine President Volodymyr Zelensky, Trump has insisted more than 80 times that the whistleblower's account is fake, fraudulent, incorrect, 'total fiction,' 'made up,' and 'sooo wrong,'" reads the PolitiFact piece, later adding: "Despite what Trump claims, the whistleblower got the call 'almost completely' right."

In fact, that may be underselling the disparity between the accuracy of the whistleblower's complaint and Trump's claims of its inaccuracies.

Remember that the heart of the whistleblower complaint was the July 25 call -- and a belief that Trump was using his powers as president to further his personal and political interests. Which, according to the transcript of the call the White House released in September, is what happened. To revisit:

1) Trump tells Zelensky that the US does a lot for Ukraine.

3) Trump asks Zelensky for a favor: to look into a debunked conspiracy theory that the hacked Democratic National Committee server is in Ukraine.

4) Trump asks Zelensky to look into Joe and Hunter Biden.

Now, you can debate whether that's an impeachable offense. Hell, you can even debate whether it's wrong -- although that debate seems a lot harder for me to see both sides of. But even so, it's impossible to dispute that what the whistleblower said in terms of the nature and content of the call was accurate in virtually every way.

"The whistleblower, who to Trump's consternation remains unidentified, raised the concern that the president's actions leading up to and on that phone call amount to interference in the coming presidential election. Agree or disagree with the conclusion, or whether the president's conduct warrants impeachment, the actions described in the complaint stand up to factual scrutiny."

Trump's effort to discredit the whistleblower are solely a defense mechanism. Because he believes he can do no wrong -- a dangerous belief for anyone, especially a president -- then anything that appears to show Trump acting in inappropriate ways has to be "sooo wrong" or a "total fiction." And because Trump appears to lack any sense of why whistleblower provisions and protections are in place, he spent the last months suggesting that a) the whistleblower doesn't exist b) the whistleblower is actually House Intelligence Committee Chairman Adam Schiff (California) or c) the whistleblower must be forced to reveal his or her identity to Trump.

It's hard to overstate the chilling effect Trump's attacks on the whistleblower will have. Imagine if you were weighing using the established whistleblower law to shine a light on some corporate (or political) malfeasance. Would you feel AT ALL comfortable doing so in the environment that Trump has created? No way.

What that means is that Trump is actively undermining the legal rights of whistleblowers. That's the President of the United States making it much harder for people who see wrongdoing to come forward and have the reasonable expectation of privacy and anonymity.