Trump claims Americans have to flush the toilet '10 times, 15 times, as opposed to once' 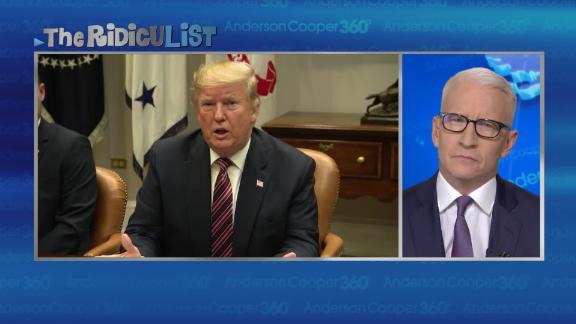 President Donald Trump on Friday had a lot to say about toilets, sinks and showers.

The President claimed Americans are flushing their toilets "10 times, 15 times, as opposed to once" and argued that they are having difficulty with washing their hands in what appeared to be a tangent about low-flow sinks and toilets.

"We have a situation where we're looking very strongly at sinks and showers and other elements of bathrooms where you turn the faucet on -- and in areas where there's tremendous amounts of water, where the water rushes out to sea because you could never handle it, and you don't get any water," the President said during a roundtable with small business leaders about deregulatory actions.

"You turn on the faucet and you don't get any water. They take a shower and water comes dripping out. Just dripping out, very quietly dripping out," the President continued, lowering his voice as he spoke about the drips. "People are flushing toilets 10 times, 15 times, as opposed to once."

It wasn't entirely clear what he was talking about but it appeared to have to do with bathroom fixtures with low-flow appliances. He said the Environmental Protection Agency was looking into the issue on his suggestion.

"They end up using more water. So (the) EPA is looking at that very strongly at my suggestion," Trump said, though he did not give details on what suggestions, if any, he made. Video of the President's comments has been viewed more than a million times online.

Trump, speaking in the Roosevelt Room of the White House amid an impeachment inquiry, then turned his attention to Americans attempting to wash their hands.

"You go into a new building or a new house or a new home and they have standards only you don't get water. You can't wash your hands practically, there's so little water comes out of the faucet. And the end result is you leave the faucet on and it takes you much longer to wash your hands," Trump said.

He went on: "There may be some areas where we'll go the other route -- desert areas -- but for the most part you have many states where they have so much water -- it comes down, it's called rain. They don't know what to do with it," to laughs from around the table. "So we're going to be looking at opening up that I believe. And we're looking at changing the standards very soon."

It is also unclear what standards Trump was referring to or how they could be changing. The EPA has a voluntary program that labels efficient fixtures, such as showerheads, called WaterSense -- similar to EnergyStar for water, which helps conservation. A 1992 law also regulated showerhead pressure, but it was implemented through the Energy Department, not the EPA.

The EPA said it is reviewing relevant federal programs. "EPA is working with all federal partners including Department of Energy to review the implementation of the Federal Energy Management Plan and how it's relevant programs interact with it to ensure American consumers have more choice when purchasing water products," EPA spokesman Michael Abboud told CNN.

CNN has reached out to the Energy Department for comment.

"Being a vain person, that's really important to me," he said. "It gives you an orange look, I don't want an orange look." The President has made similar comments before, and the Department of Energy has moved to rescind Obama-era rules on energy efficiency.

And of new car models, Trump added: "Frankly they don't work very well," because of standards which California put in place. "Right now the cars are made out of papier-mache, and ours are actually, we allow steel content," he said.

In the past, the President has crusaded against windmills and wind energy. He has claimed that they create "bird graveyards" and the noise they produce "causes cancer."