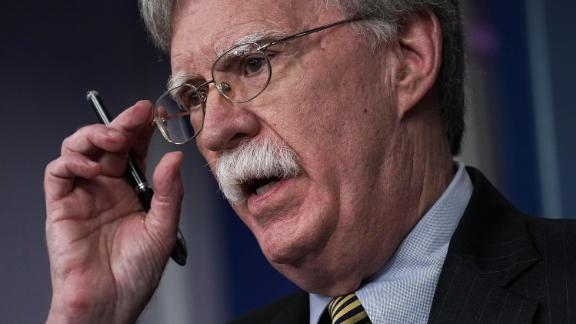 Former national security adviser John Bolton said in a tweet that the White House barred him from his own Twitter account after he left the administration and suggested it acted out of concern about what he might say. Bolton's tweet directly contradicts comments that Trump made to Fox News that the White House did not freeze Bolton's account. CNN's Brian Todd reports.

Former national security adviser John Bolton said Friday the White House barred him from his own Twitter account after he left the administration and suggested it acted out of concern about what he might say.

Bolton, a constant if unseen presence during the House impeachment inquiry into Trump, reappeared on Twitter Friday after a months-long public hiatus since his departure from the White House in September.

"Since resigning as National Security Advisor, the White House refused to return access to my personal Twitter account," Bolton tweeted. "Out of fear of what I may say? To those who speculated I went into hiding, I'm sorry to disappoint!"

Bolton's tweet directly contradicts comments that Trump had made earlier in the day to Fox News. Asked during an interview if the White House had frozen Bolton's account, Trump had told Fox News Friday: "No, of course not."

When approached by CNN at a train station in Washington, DC, on Friday evening, Bolton alleged the White House "attached software" to his account.

The White House also denied that it blocked Bolton from accessing his personal account.

"The White House did not block Mr. Bolton from accessing his personal Twitter account, and wouldn't have the technical means to do so," a senior administration official told CNN.

"Glad to be back on Twitter after more than two months. For the backstory, stay tuned........" he posted.

"We have now liberated the Twitter account, previously suppressed unfairly in the aftermath of my resignation as National Security Advisor. More to come....." a second tweet said.

The last time Bolton had tweeted was nearly two months ago.

"When Obama WH senior officials left Govt, we were required by WH ethics lawyers to archive all tweets issued while in Govt and start our accounts afresh. In other words, I had to give up >600k followers and begin at zero. Glad to see the Trump WH is consistent in its corruption," she wrote.

Bolton's most recent post had been on September 10, the day of his ouster, in which he disputed Trump's assertion that he was fired.

"I offered to resign last night and President Trump said, 'Let's talk about it tomorrow,' " it said.

A longtime Republican foreign policy operative, Bolton was a key observer of the events that lead to the House impeachment inquiry, but refused to appear before the House committee.

Even so, during the hearings Bolton hinted through his lawyer that he had potentially explosive "personal knowledge" of relevant meetings and conversations "that have not yet been discussed in testimonies thus far."

It remains unclear how Bolton will utilize his Twitter account going forward, but CNN has learned that it will not be used as a replacement for testimony in the impeachment inquiry or to post anything he might know related to the President's dealings with Ukraine.

Bolton has kept a low profile since impeachment proceedings began and stayed tight-lipped about whether he planned to cooperate with the House probe -- not even discussing the matter with some of his closest allies.

Still, he left his mark on the impeachment inquiry and is at the center of several key events related to the investigation.

Those include suggestions that he had raised concerns about the President and Ukraine, calling efforts by some top officials to push for investigations into former Vice President Joe Biden and matters related to the 2016 election a "drug deal," according to testimony last month from former top Russia adviser Fiona Hill.

Several witnesses in the probe have already testified that Bolton had concerns about Trump's dealings with Ukraine and encouraged his staff to sound the alarm about potentially illegal actions by the President's personal lawyer, Rudy Giuliani.

House committees opted not to subpoena Bolton earlier this month after his attorney threatened to fight such a move in court, according to a committee official. Unsurprisingly, the former national security adviser was a no-show at his scheduled deposition.

Hill, who served under Bolton on the NSC until she left the administration this summer, seemed to suggest that she believes Bolton should testify during her own public hearing Thursday.

"I believe that those who have information that the Congress deems relevant have a legal and moral obligation to provide it," she told lawmakers.

Hill also provided a firsthand account Thursday of Bolton's reaction during a July 10 meeting when US ambassador to the European Union Gordon Sondland said a White House visit for Ukrainian President Volodymyr Zelensky was conditioned on him announcing "investigations" sought by his American counterpart.

"As Ambassador Bolton was trying to move that part of the discussion away -- I think he was going to try to deflect it on another wrap up topic -- Ambassador Sondland leaned in basically to say 'well we have an agreement that there will be a meeting if specific investigations are -- are put underway' and that's when I saw Ambassador Bolton stiffen," Hill testified.

"I was sitting behind him in the chair and I saw him sit back slightly ... he'd been more moving forward like I am to the table. And for me, that was an unmistakable body language and it caught my attention. And then he looked up to the clock and, you know, at his watch or I suppose his wrist, in any case ... and basically said well, you know, it's been really great to see you, I'm afraid I've got another -- another meeting," she added.