'It was no secret': Ambassador says quid pro quo came at 'express direction of the President' 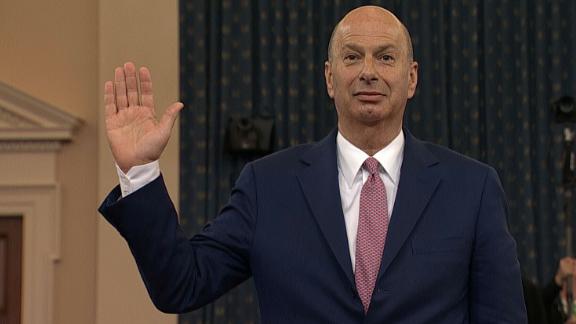 US Ambassador Gordon Sondland testified there was a quid pro quo that came from Rudy Giuliani who was expressing the desires of President Donald Trump.

US Ambassador Gordon Sondland testified Wednesday there was a quid pro quo for Ukraine to announce investigations into President Donald Trump's political opponents that came from the President's personal lawyer Rudy Giuliani at the "express direction of the President."

What's more, Sondland provided House impeachment investigators with emails and texts showing it wasn't just him and Giuliani pushing for the investigations outside government channels — Trump's inner circle knew what was going on, too. He even said he raised concerns with Vice President Mike Pence that the freezing of $400 million in security aid to Ukraine was linked to the investigations.

Sondland's testimony is the most damning evidence to date directly implicating Trump in the quid pro quo at the heart of the impeachment inquiry. His public remarks show a link between US security aid and a White House meeting and Ukraine publicly announcing investigations that would help the President politically. From the beginning of Wednesday's hearing, Sondland's comments dragged some of Trump's senior most officials -- including Pence, his chief of staff and his secretary of state -- into the scandal.

"Everyone was in the loop," Sondland said. "It was no secret."

In his remarkable opening statement before the fourth day of public impeachment hearings, Sondland told House impeachment investigators that Trump "wanted a public statement from President (Volodymyr) Zelensky committing to investigations of Burisma and the 2016 election."

Sondland said that Trump's senior aides, including acting chief of staff Mick Mulvaney, Secretary of State Mike Pompeo and Energy Secretary Rick Perry, were all aware that Zelensky was briefed days ahead of the July 25 call to commit to doing investigations.

"Everyone was informed via email on July 19, days before the Presidential call," Sondland said. "As I communicated to the team, I told President Zelensky in advance that assurances to 'run a fully transparent investigation' and 'turn over every stone' were necessary in his call with President Trump."

Sondland said that he told Pence before his September 1 meeting with Zelensky that he "had concerns that the delay in aid had become tied to the issue of investigations." Sondland said that Pence "nodded" in response, but he did not remember if he gave any further reaction.

At the center of the Ukraine storm

Of the dozen witnesses Democrats have called to testify publicly in the impeachment inquiry, none had as much involvement in the push for Ukraine to announce an investigation as Sondland.

Sondland said that he told Pence — who has so far mostly avoided being publicly implicated in the Ukraine scandal — before his September 1 meeting with Zelensky that he "had concerns that the delay in aid had become tied to the issue of investigations."

Sondland testified he was never able to obtain a clear answer for why the security aid was frozen, but he believed that "if Ukraine did something to demonstrate a serious intention to fight corruption, specifically addressing Burisma and 2016 server, then the hold on military aid would be lifted."

"In the absence of any credible explanation for the suspension of aid, I later came to believe that the resumption of security aid would not occur until there was a public statement from Ukraine committing to the investigations of the 2016 elections and Burisma," Sondland said.

Sondland's testimony that it was a "presumption" the aid was tied to investigations gave Republicans a small opening to argue there wasn't a quid pro quo tied to the security aid. "President Trump never told me directly that the aid was conditioned on the meetings," Sondland said.

Sondland, however, said it was "abundantly clear" there was a link between the two, even if he wasn't explicitly told.

"As of September 9, you understood, did you not, that President Trump — either himself or through his agents — required that President Zelensky make a public announcement of the two investigations that President Trump cared about in order to get both the White House meeting and to release the security assistance?" asked Democratic counsel Daniel Goldman.

"I believe that is correct," Sondland said.

Republican counsel Steve Castor pressed Sondland on his conversations with Trump, confirming that Trump never "personally" told Sondland there were preconditions on releasing the aid or arranging the White House meeting. He asked Sondland how he knew that Giuliani "was expressing the desires of the President."

Castor also took aim at Sondland's reliability as a witness, noting that he didn't have records, didn't take notes and didn't recall many episodes. "I mean, this is like the trifecta of unreliability," he said.

Speaking to reporters as he left the White House Wednesday, Trump repeatedly said he told Sondland over the phone that he wanted "nothing" on Ukraine.

"I say to the Ambassador in response: I want nothing, I want nothing. I want no quid pro quo," Trump said, reading from notes that appear to be written in Sharpie. "Tell Zelensky, President Zelensky, to do the right thing."

Trump also downplayed his connection to Sondland, saying he "came in late" as a backer of his 2016 campaign. "This is not a man I know well," Trump said. "Seems like a nice guy, though."

Giuliani also downplayed his connection to Sondland, saying in a tweet that Sondland was "speculating" and he had "VERY little contact" with him. Giuliani later deleted the tweet.

And Pence's office also distanced the vice president from Sondland, too. Pence chief of staff Marc Short said the vice president "never had a conversation with Gordon Sondland about investigating the Bidens, Burisma, or the conditional release of financial aid to Ukraine based upon potential investigations."

House Intelligence Chairman Adam Schiff said Sondland's testimony shows "that the knowledge of this scheme was far and wide."

"We now can see the veneer has been torn away, just why Secretary Pompeo and President Donald Trump do not want any of these documents provided to Congress," Schiff told reporters Wednesday, "because apparently they show, as Ambassador Sondland has testified, that the knowledge of this scheme to condition official acts, a White House meeting and $400 million in security assistance to an ally at war with Russia, was conditioned on political favors the President wanted for his reelection."

Since Sondland testified last month behind closed doors, multiple administration officials have provided testimony that contradicted his account. In the case of his September 1 comments to the Ukrainians, Sondland amended his testimony when he said he recalled that he told them the aid was conditioned on announcing investigations in the wake of others' testimony.

Sondland was asked about other discrepancies, like US diplomat Bill Taylor and National Security Council aide Tim Morrison saying Sondland told them the President said he wanted Zelensky to "go to a microphone" to announce the investigations. Taylor said that Sondland told him they would be in a "stalemate" unless Zelensky made the announcement.

"I don't recall who told me — whether it was (former special envoy) Kurt Volker, whether it was Giuliani or whether it was President Trump — it's got to be Zelensky. It can't be the prosecutor. But that's what I relayed," Sondland said.

Sondland also confirmed that he spoke to Trump on July 25, hours before the President's call with Zelensky. Sondland said "it's likely" he would have received a message from Trump that Volker had referenced in a text message, but he said he didn't recall the specifics of the call.

Sondland also acknowledged another call he left out of his initial testimony: the July 26 conversation where US diplomat David Holmes says he overheard Trump ask Sondland if Zelensky was gonna "do the investigation," and Sondland replied Zelensky was "gonna do it."

Sondland did not dispute those details in the call involving his conversation with Trump.

"Actually, I would have been more surprised if President Trump had not mentioned investigations, particularly given what we were hearing from Mr. Giuliani about the President's concerns," he said.

This story has been updated with additional developments Wednesday.