Is Pete Buttigieg peaking too soon? 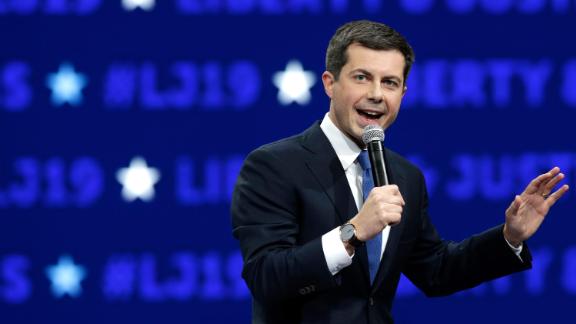 South Bend, Indiana, Mayor Pete Buttigieg joined the leaders of the Democratic race for president in Iowa, up 14 percentage points since August, according to a new Monmouth University poll of likely caucusgoers.

First came a Quinnipiac University poll of New Hampshire voters on Monday that showed Buttigieg at 15% support -- clumped with the rest of the front-running pack, including former Vice President Joe Biden (20%), Sen. Elizabeth Warren of Massachusetts (16%) and Sen. Bernie Sanders of Vermont (14%). (Buttigieg began running ads in the Granite State on Tuesday.)

Then on Tuesday, Buttigieg got even better news: In a Monmouth University Iowa poll, he stood at the top, with 22%, followed by Biden (19%), Warren (18%) and Sanders (13%). Because their support falls within the margin of error of +/- 4.6 percentage points, there is no clear leader in the Iowa poll, with Buttigieg, Warren and Biden making up the top tier. Even more impressive for Mayor Pete is that he gained 14 points between an August Iowa Monmouth poll and this survey while Biden lost 7 points and Warren 2. (Sanders gained 5 from that August poll to now.)

Taken together, there now exists the possibility that the 37-year-old wonderboy could win the first two voting states, a sweep that, if it came to pass, would put him in the driver's seat for the Democratic nomination.

What could possibly rain on the Pete parade? Try this -- in tweet form from former Obama senior strategist Dan Pfeiffer:

"This is almost twelve years to the week that Obama made his move in Iowa, the only challenge for Buttigieg is that the Caucus is one month later this cycle so it's a bigger challenge to sustain the momentum," Pfeiffer tweeted about the Monmouth results.

Which is true! In 2008, due to attempts by other states to lessen the influence of Iowa and New Hampshire, the Iowa caucuses were held on January 3. In 2020, they are scheduled for February 3.

Which means that Buttigieg needs to sustain his momentum in Iowa -- which he quite clearly has -- for the next (gulp!) 83 days. Not impossible, but a heck of a lot harder than keeping momentum for, say, 30 days.

For some perspective, 83 days ago was August 21, 2019. On that day, President Donald Trump canceled his planned trip to Denmark after the country's leaders made clear they had no interest in selling Greenland to the United States. And on that same day, Washington Gov. Jay Inslee dropped out of the presidential race.

Feels like a loooooong time ago, right? And it speaks to Buttigieg's challenge over the next 83 days.

The Point: Any of the candidates -- with the possible exception of Warren -- would change places with Buttigieg as of today. But that doesn't mean his work in the race is done.

UPDATE: This story has been updated to add the margin of error on the Monmouth University Iowa poll.