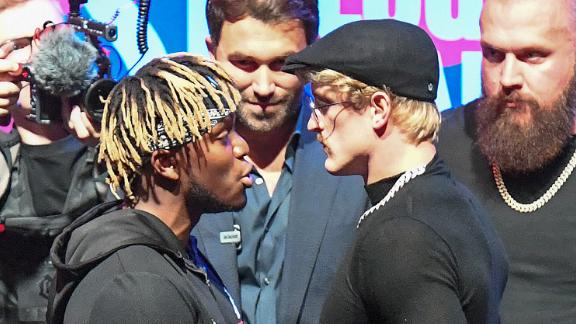 The two YouTubers face off in a professional boxing match at the Staples Center in Los Angeles on November 9 in a rematch of their 2018 fight in Manchester which ended in a draw.

The Pomeranian dog's name is a less than subtle reference to Paul's own dog, Kong, that was eaten by a coyote. Paul's brother Jake is also on stage drinking a cup of tea.

In boxing's pre-fight war of words, braggadocio behavior between fighters is commonplace. But KSI and Paul have taken the trash talking to a new level.

While the two will face off in a boxing match, their careers started on YouTube. Olajide "KSI" Olatunji is a 26-year-old British gamer, vlogger and rapper.

Paul is a 24-year-old American vlogger, who in December 2017, uploaded a video showing a dead body in Japan's so-called "suicide forest." In 2015, YouTube was asked by women's groups to remove KSI's videos for demeaning victims of sexual violence and spreading misogynistic views.

The insults traded between the two camps during the press conferences have often descended into childish abuse, and have resulted in traditional boxing fans being reticent to give the KSI vs. Paul bout any legitimacy.

Which is why not everybody is calling this is a boxing match. "Circus" and "farce" are a couple of the more charitable characterizations.

So those agnostics aren't looking forward to the second meeting of KSI and Paul, which takes place on November 9 at Los Angeles' Staples Center. The contest is a rematch of their 2018 bout for the YouTube Boxing Championship, which ended in a draw.

Billed as "The Biggest Internet Event in History," their first fight was watched by about 800,000 people, with viewers paying $10 to watch on YouTube, and a further 1.2 million viewers watching via pirated Twitch streams. That doesn't include the 21,000 people that packed out the Manchester Arena to watch the two men slog it out.

Eddie Hearn and Matchroom Boxing -- one of the biggest boxing promoters in the world -- are promoting the second fight with broadcast partners Sky Sports and DAZN.

The rematch won't be shown on YouTube "to ensure risk and costs are not a problem" because of the piracy that surrounded the first fight, according to KSI's manger.

"I realized straight after the first KSI vs. Logan fight that we didn't necessarily need to host the rematch on YouTube PPV, even if they wanted it," KSI's manager Liam Chivers told CNN.

Former WBO cruiserweight champion Johnny Nelson, who hosted a face off between the two boxers before their first fight, isn't one of the skeptics turning their nose up at the rematch.

"It was like the Beatles had turned up," Nelson told CNN, who admitted that the two were "nothing to me" before meeting them.

"I'm a 52-year-old man and I like to think I'm up on it, but I did not realize how famous a YouTuber could be for doing what they do.

"When they were in Manchester (for their first fight), if you look at the demographic of the crowd, it was youngsters, it was mums with their kids. I had kids coming up to me in the street saying: 'Oh my god, you met KSI! Oh my god, you met Logan!'"

Last month, KSI took to the stage to a huge ovation from the 3,000-strong crowd for a second pre-fight media conference in London. Paul followed shortly after -- dressed like a classic movie villain with a pencil mustache and black flat cap -- accompanied by deafening boos.

Critics see this contest as a publicity stunt for two young men to earn a lot of money, while advocates view it as a huge opportunity to bring boxing to a new audience.

KSI has 20.4 million subscribers on YouTube, while Paul has 19.9 million. That's 40.3 million reasons why Hearn and Matchroom, which look after some of the biggest names in boxing like Joshua, Oleksandr Usyk and Katie Taylor, are interested.

"It's a way of introducing our world to this new world," Nelson explained. "And if it inspires 1% or 10% of the fans who have come from watching KSI or Logan, then our sport wins.

"And that's why Hearn has now got involved because at the time of the first fight, I'm sure he scoffed at the idea but then he thought 'Jesus, we're missing a trick here.' I think we all did. We're being introduced to a new world and it's intriguing."

CNN tried to speak to Hearn and both fighters about the upcoming fight but did not get a response.

Joe Weller, a British YouTuber with more than five million subscribers, thinks boxing will only benefit if the YouTube viewers are captivated by good boxing.

"I think you're only going to get a fraction of the audience even watching those undercard fights leading up to the main event and even the people that do watch it, if the fights aren't entertaining and there aren't big knockouts, then I can't see many people getting captivated by it," Weller told CNN.

"Because a lot of the lighter weight fights that are more about the technicalities of boxing and the skill, that isn't going to entertain the average 13-year-old YouTube fans. They're really going to only be sold by seeing a big KO that's an incredible finish."

More than 1.5 million people tuned in live to watch KSI beat Weller at the Copper Box Arena in London in 2018, in the first official fight between two YouTubers.

"I genuinely couldn't be prouder to see where it has gone," Weller said. "Never did I think it would get to this point.

"Now to see these boys flying the flag of YouTube and doing what they are doing, I'm just really proud and really can't wait."

Initially an amateur endeavor, the first fights between YouTubers were predictably low in quality. Former British super-middleweight champion Paul Smith said the fight was "not boxing."

But because the rematch between KSI and Paul was widely expected after their draw -- it was announced very soon after their first fight -- both boxers have had more than six months to prepare for November's bout.

KSI has been working with the Mayweather family in Las Vegas -- primarily Jeff Mayweather, Floyd's uncle -- while Paul has employed former WBO world heavyweight champion Shannon Briggs as his trainer.

While the two have been putting in the hours in preparation, Nelson thinks they still enter the fight as "novices."

"It takes many years to acquire and achieve the grace you see at the top level," he said. "These two boys are entering their first professional fight. The only things they're used to is the large crowds and the attention, so it will all be about ability.

"Compared to the fights on the under card, people will see how much they have to learn before they reach that sort of level. Neither fighter would be advised to get in the ring with a former professional world champion, no matter how big the age gap."

"It is obviously a little bit annoying that there's not going to be YouTubers on the undercard but having said that, there haven't been loads of standout YouTubers claiming that they even want to fight," said Weller.

READ: From fighting 'as a boy' to undisputed champion. How Katie Taylor boxed clever

In an attempt to establish the fight's validity to "old-school" fans, Hearn has insisted that the boxers turn professional, and that they fight using 10-ounce gloves and without head guards.

Weller believes that this fight is a real opportunity to showcase YouTube's positives to a different audience, but so far, admits it has been a bit of a "circus."

"It's made the whole thing, in the eyes of non-YouTuber fans, and to old-school boxing fans, look like an absolute joke. And it's a shame because we want -- as a YouTuber and a YouTube fan -- to be taken seriously. The opinions of those people, they're are not going to change our lives, so we don't really care.

"In terms of the credibility of the event, it would've been nice to see both conduct themselves in a bit more of a professional manner."

If all goes well and YouTube boxing is showcased in a positive manner, it can be, Weller believes, a near limitless opportunity.

"I think the rest of the YouTube scene are wanting for the fight to legitimize YouTube," he said. "If this event is a big success, think how many brands are going to see this and then want to invest in YouTube?

"That's the reason why it may, in the eyes of the YouTube scene, be more about YouTube being taken seriously."

Raymond Boyle, professor of communications from the University of Glasgow, thinks that while this fight won't be broadcast on YouTube, boxing could build "the interest and audience of tomorrow" by showing future fights there.

"I think the big selling point of YouTube is its young demographic," Boyle told CNN Sport. "This is what sport on TV needs to be concerned about (and indeed perhaps sports themselves).

"I think in many ways YouTube and TV are two differing but connected eco-systems. So simply reading across from one to another is a dangerous assumption (certainly among TV executives who thought putting YouTubers on TV would mean their followers watched).

"Rather we have a more complex viewing environment, where getting heard and having a profile among younger audiences means you need to have some online or YouTube presence. For me sports need to be in this space, but not to the exclusion of TV."