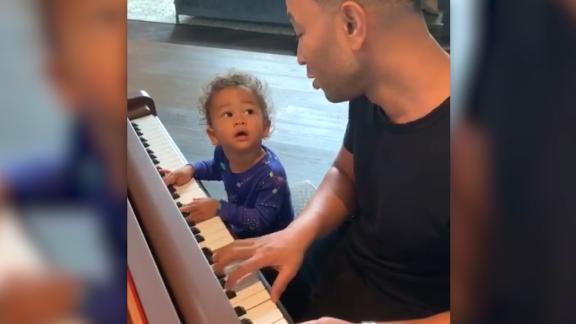 Singer John Legend and his son play "My Favorite Things" on the piano in a video posted by his wife Chrissy Teigen.

Consider yourself warned: This video clip will make your heart melt.

It's of John Legend playing the piano, serenading his 1-year-old son Miles Stephens.

Chrissy Teigen posted the video on Instagram Saturday, along with the caption "stop everything."

After a few moments of the pair tickling the keys, Legend starts singing "My Favorite Things" from the 1959 Rodgers and Hammerstein musical "The Sound of Music."

Throughout the video, the father and son duo gaze adoringly at each other. (Did your heart melt yet?)

The singer also made an appearance in the 2016 romance musical, "La La Land."

Tiegan and Legend were married in 2013 and are now parents to two children, Miles and 3-year-old Luna.

Helping get food on the table

Do not delay medical care

Stay safe on the water