Democrats' only choice is to impeach Trump 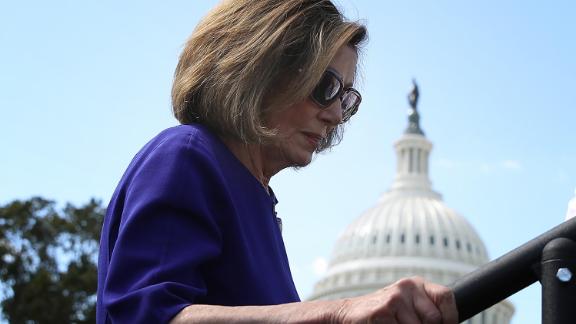 House Speaker Nancy Pelosi is planning to put a resolution on the House floor to address the Ukraine scandal, amid growing calls to start the impeachment process against President Donald Trump, according to sources.

House Democrats flubbed it the first time by spinning in circles, as Pelosi transparently slow-played the Mueller impeachment inquiry (or non-inquiry) to its seemingly inevitable whimper of an ending. But there's a valuable lesson to be learned from the Mueller case: Impeachment is a remedy both for criminality and for non-criminal abuse of power. And there looks to be plenty of both in the rapidly-unfolding Ukraine scandal.

Let's start with potential crimes. Based solely on Trump's own admissions and the latest Washington Post reporting -- that Trump suspended $400 million in aid to Ukraine just days before he spoke with the President of Ukraine about an investigation of alleged wrongdoing by Joe Biden, one of Trump's primary political opponents -- he could have violated any or all of these federal criminal laws.

Trump and his defenders claim his motive was to root out corruption generally in Ukraine, and Trump stated Tuesday that funds ultimately were paid to Ukraine, though he added, "I'd withhold again and I'll continue to withhold until such time as Europe and other nations contribute to Ukraine because they're not doing it." But why would Trump be so interested in corruption in Ukraine, if not for the Biden connection? Has he displayed similar levels of concern for corruption in other foreign countries?

Trump tweeted that he will release a complete, unredacted transcript of his call with the Ukrainian President on Wednesday. The details of that transcript will be crucial, but Trump's preemptive defense falls flat. First, Trump tweeted that his conversation with the Ukrainian President was "very friendly." That's irrelevant. People can be downright chipper while still soliciting bribes and foreign election aid.

Trump also claims he exerted "no pressure" during the call. Perhaps, but his decision to withhold hundreds of millions in foreign aid from Ukraine just before likely created more pressure than any phone call could.

And Trump claimed, "NO quid pro quo." But people who commit bribery and extortion rarely state the quid pro quo -- the "this for that" exchange -- explicitly. And Trump, by his own original statement, made clear he equates "corruption in Ukraine" with "investigate Biden" and little else: "All of the corruption taking place was largely the fact that we don't want our people like Vice President Biden and his son."

So, what crimes could Trump be violation of?

Foreign election aid -- as Trump should well know from the Mueller report, it is a crime to "solicit, accept or receive" a "thing of value" in connection with an election from a foreign national. By his own admission, Trump encouraged ("solicited") Ukraine to investigate Biden by allegedly dangling hundreds of millions of dollars in recently-suspended foreign aid.

While a criminal investigation does not carry a specific price tag, by any commonsense reading it is a "thing of value." And a criminal investigation of Biden would be extraordinarily helpful 2020 campaign fodder for Trump, more valuable than any yard sign or bumper sticker. Why else would Trump and his political flacks, such as personal attorney Rudy Giuliani, be so laser-focused on Biden, of all people -- who currently holds no public office but is a leading contender to take on Trump in the 2020 presidential election?

Bribery -- it is illegal for a public official "directly or indirectly" to demand, seek, receive or accept any "thing of value" in return for "being influenced in the performance of any official act." Here, again, a criminal investigation of Biden should qualify as a "thing of value" for the Trump 2020 campaign, which Trump plainly sought from Ukraine. The corresponding "influence in the performance of an official act" -- the quid pro quo -- is the delivery of foreign aid to Ukraine. Trump himself has drawn that link between foreign aid and Ukraine's efforts to root out "corruption." Trump has made clear that he equates "corruption" with the Biden investigation.

Extortion is the flip side of the bribery coin. Bribery is essentially "I'll help you, if you help me," while extortion is "I'll harm you, if you don't help me." The suspension of $400 million in aid to Ukraine just days before the call is the proverbial brick thrown through the plate glass window: Here's a taste of what'll happen if you don't comply.

Congress first must determine whether Trump committed a crime. If so, then impeachment is imperative. Even Trump's staunchest defenders would have difficulty arguing that he should remain in the White House if he committed a federal crime while in office.

But Congress cannot stop at the criminality question. Because even if Trump's conduct dodges the statutory raindrops and doesn't quite meet the definition of any federal crime, impeachment at its core is a remedy for abuse of constitutional power.

Impeachment need not be based on a crime. The Constitution prescribes impeachment for "treason, bribery, or high crimes and misdemeanors." But the term "high crimes and misdemeanors" is not defined anywhere in the Constitution or statute, and appears to be drawn from English parliamentary practice, which provided for impeachment for crimes or for conduct beyond established criminal law.

The Constitution separates impeachment from criminal prosecution. Draft articles of impeachment against President Richard Nixon included abuse of power and misuse of public office, while one of the proposed articles of impeachment against President Bill Clinton (voted down by the full House) related to abuse of power for non-criminal conduct. Fundamentally, impeachment is a political process with a political remedy (removal from office), while criminal charges address violations of law by imposing a punitive remedy (imprisonment and/or a fine).

This is where House Democrats have dropped the ball following the Mueller report. Because Mueller did not explicitly find that Trump committed criminal obstruction of justice -- given the Justice Department policy against indicting a sitting president -- Congress, reined in by Pelosi, has chosen not to make use of the political side of impeachment except for its minimal, superficial progress on a glacial impeachment inquiry.

Until now, Pelosi has stuck to her commitment not to pursue impeachment, instead offering up limp and hopeless legislative proposals. But Trump's conduct here is so flagrant, so lawless and so abusive that Pelosi is now changing course on impeachment.

By stepping up and seriously pursuing impeachment, House Democrats can salvage their legacy and meet their obligation to defend the Constitution against "all enemies, foreign and domestic."

Lee, California: Does the House Intel Committee have a legal right to see the intelligence community whistleblower complaint about Trump?

On its face, the law is straightforward. If the Intelligence Community inspector general (IG) receives a complaint and deems it to be (1) of "urgent concern" and (2) "credible," then he or she "shall submit" the complaint to the congressional intelligence committees. In the Ukraine whistleblower case, the inspector general -- a Trump appointee -- reviewed the complaint and found that it raised an urgent concern and was credible, and should be submitted to Congress.

But that's when the director of National Intelligence (DNI) stepped in. After consulting with Attorney General William Barr's Justice Department, the DNI concluded that the IG should not forward the complaint to Congress because the President is not "a member of the Intelligence Community" and the conduct did not "involve an intelligence activity under the DNI's supervision." In other words, according to the DNI and Justice Department, the law does not apply to the President.

That appears to leave the DNI and Justice Department (on one hand) and the IG and Congress (on the other) at an impasse. Acting DNI Joseph Maguire is scheduled to testify in the House Intelligence Committee on Thursday. While there likely will be plenty of accusations and fireworks, do not expect the DNI and Congress suddenly to reach a mutual resolution. Instead, this dispute seems headed for the courts where, even in the best-case scenario, it will take months to resolve.

That said, there is nothing to prevent Congress from investigating even without the complaint in hand. While the whistleblower complaint could be important to Congress's investigation, Congress need not await the complaint's arrival before taking action.

Yvonne, Arizona: Some of the allegations about both President Donald Trump and Justice Brett Kavanaugh pertain to their conduct before taking office. Can an official be impeached based on conduct that occurred before the person was in office?

In fact, federal officials have been impeached for conduct predating their time in office. Most recently, in 2010, federal judge Thomas Porteus was impeached and convicted on various counts, some of which related to his conduct as a state judge (before joining the federal bench) and during his nomination and confirmation process. As a practical matter, it could be more difficult to rally political support for impeachment based on conduct before a subject took office, but legally there is no bar to it.

Craig, Canada: Does Congress have the authority to levy fines on witnesses who refuse to answer questions, like former Trump campaign manager Corey Lewandowski?

As the Trump administration repeatedly contests and defies congressional subpoenas, House Democratic leaders have openly contemplated utilizing new enforcement mechanisms, including fines. However, there is no specific law on the books that gives Congress the right to levy fines and, in fact, nobody has ever been fined by Congress for defying a subpoena. But constitutional scholar Kia Rahnama convincingly argues that Congress's inherent enforcement powers likely include the power to impose fines.

While the current Congress could try to impose fines, there are major practical obstacles to actually collecting. First, there is enough legal uncertainty that the recipient of a fine could contest the issue in courts. It likely would take months to adjudicate the issue. Second, even if Congress did clearly have the power to fine a witness, I'd expect Lewandowski or other Trump loyalists to simply refuse to pay; much as Trump already has announced he will "fight all the subpoenas," he likely would fight all the fines. Congress would again have to go to the courts seeking an order requiring the witness to pay up.

Essentially, if Congress tried to force Lewandowski to pay a fine, I'd expect him to respond, "Make me." Congress ultimately might succeed, but not without a long and bruising legal fight that likely would detract from its core investigative and oversight mission.

1) Will Pelosi finally see the light and permit her caucus to move forward on impeachment?

3) Will either Trump or Senate Majority Leader Mitch McConnell make the first move to endorse even a limited gun control legislative package?

Court docs: Mason City man points loaded gun at person after being told to slow down

Attorney: Use of force justified in Mason City officer-involved shooting