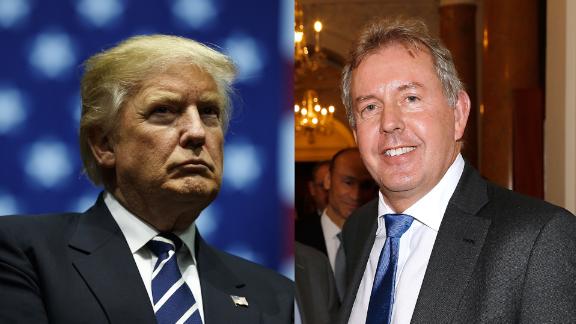 President Donald Trump said Monday that the White House will no longer deal with British Ambassador to the US Kim Darroch after he said that the administration was "inept" and "clumsy."

Here's what else you need to know to Get Up to Speed and Out the Door. (You can also get "5 Things You Need to Know Today" delivered to your inbox daily. Sign up here.)

President Trump struck back at the UK diplomat who called him "inept" and "clumsy" in leaked diplomatic cables. Trump, through tweets of course, said his White House would no longer deal with British Ambassador to the US Kim Darroch. A spokesman for outgoing UK Prime Theresa May said she still has "full faith" in  Darroch, but it's hard to see at this point how he can effectively do his job. Trump's tweets were more than just him lashing out at someone who ticked him off. The President, CNN's Stephen Collinson says, is trying to gain political leverage over the Brits and make it harder for another country to get "accurate diplomatic reporting and internal intelligence" on his administration.

Millionaire Jeffrey Epstein was indicted yesterday, accused of operating a sex trafficking ring in which he sexually abused dozens of underage girls. Epstein, 66, is not only accused of paying girls as young as 14 to have sex with him, but federal prosecutors say he paid some of his victims to recruit other girls for him to abuse. Epstein pleaded not guilty to two charges; he faces up to 45 years in prison if convicted of both counts.

The case, which goes back more than a decade, has political implications because of allegations that Alexander Acosta, who is now President Trump's labor secretary, mishandled the investigation into Epstein when Acosta was a US attorney. Some now want Acosta to resign. Epstein also has ties to Bill Clinton. The former President took four trips on Epstein's plane while doing work in the early 2000s for the Clinton Foundation. But a spokesman said Clinton "knows nothing" about Epstein's alleged crimes and hasn't spoken to him in years.

Hong Kong's leader said the controversial extradition bill that spurred millions of people to protest "is dead." But Carrie Lam didn't say the bill would be formally withdrawn, something the demonstrators are still demanding. The bill, which would allow for Honk Kong residents to be extradited to mainland China, is suspended and will officially die when the current session of Hong Kong's parliament expires next summer. But protesters are worried that the bill might be revived before then, so they're demanding that lawmakers take the steps necessary to formally withdraw it immediately. Critics of the bill fear it could be used to target Hong Kong dissidents for prosecution in China.

One candidate drops out as another preps to drop in. US Rep. Eric Swalwell has ended his bid for the Democratic presidential nomination. Swalwell just flat out failed to gain traction in the race. He told CNN his endorsement of one of the remaining contenders would hinge on the candidate's work to fight gun violence. Meanwhile, billionaire Tom Steyer has reportedly told his staffers he plans to get into the race. He's donated to Democratic candidates for years, as well as to many liberal causes. But he may be best known for starring in a recent series of self-funded TV commercials calling for Trump's impeachment.

The first tropical system of the hurricane season may be in the Gulf of Mexico by the end of the week. The National Hurricane Center says the chances of a system developing in the Gulf by then is up to 80%. The storm could affect an area from the Florida Panhandle to south Louisiana. So, if you live along the Gulf Coast, now would be a great time to review your hurricane preparedness and evacuation plans.

Steve Spangle, a former field supervisor with the US Fish and Wildlife Service, who said he was pressured by the Trump administration to reverse an environmental decision, which allowed a proposed housing and golf project in Arizona to move forward

Where the heart is

A World War II sailor's Purple Heart was found in an Arizona thrift store. Now, Goodwill is trying to find his family.

If you frequent dive bars, keep an eye out for a man in a black cowboy hat. It might be Garth Brooks, doing his seven-city dive bar tour.

Looking out for you

An honor guard member's shoelace became untied during a July 4 parade in Arlington, Texas. Luckily, this 10-year-old boy was around.

Disney put out a "cast photo" for its live-action "Lion King" remake, but everybody wondered, where's James Earl Jones?

The number of people who watched Team USA win the 2019 Women's World Cup. That ranks as one of the highest-rated soccer telecasts in history.

This iguana must be in no rush to get to where it's going, since it hitched a ride on a tortoise. (Click to view.)