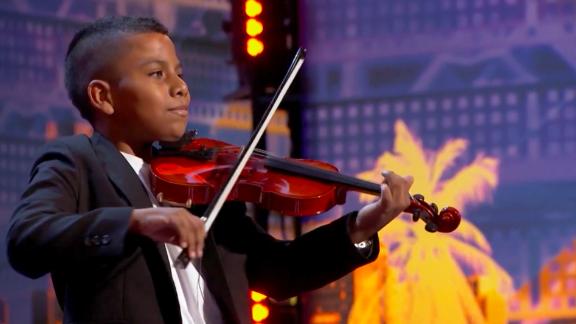 An 11-year-old cancer survivor's heartfelt violin performance earned him a golden buzzer from Simon Cowell on "America's Got Talent."

Tyler Butler-Figueroa's rendition of Kelly Clarkson's "Stronger (What Doesn't Kill You)" brought audiences to their feet and earned him a spot in this season's live shows in Hollywood.

Diagnosed with leukemia at 4, he told the judges his schoolmates bullied him for his cancer, saying it was contagious and to stay away from him.

But once he started free violin lessons after school, he found a reason to be proud of himself—and a natural talent.

"I just didn't want to be the kid with cancer," he said in a pre-audition interview. "So now I'm the kid who plays the violin."

Cowell praised Butler-Figueroa, whose cancer has been in remission for four years, for his personality and strength.

"Most people are bullied because they're better than the people who bully them," he told the performer. "I would like to say something on your behalf to the bullies."

Cowell smashed the golden buzzer, eventually joining Butler-Figueroa and his mother in an emotional hug onstage.

In May, Kodi Lee, a blind pianist and singer with autism, earned the first golden buzzer of the season for his triumphant performance of Donny Hathaway's "A Song For You."