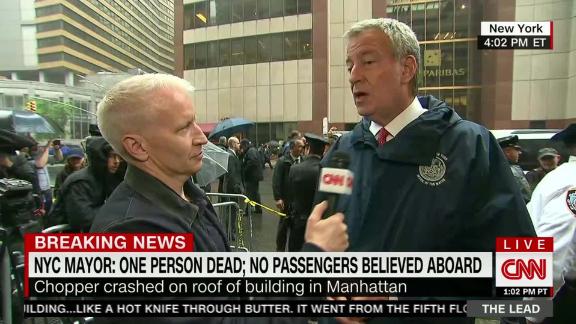 After the crash of a helicopter into a midtown Manhattan skyscraper on Monday, New York politicians and others are calling for a ban on "unnecessary" helicopter flights around the city. This is not surprising.

These kinds of knee-jerk reactions by elected officials with minimal understanding of helicopter operations or aviation in general ignore the reassuring fact that the air transportation system in the United States is the envy of the world because of its exceptional safety record.

We didn't get here by luck.

Strict rules and regulations created by the Federal Aviation Administration and backed by decades of flight experience govern how and when helicopters and other aircraft can be operated. Commercial helicopter pilots must undergo extensive training before they are permitted to fly in the airspace around a city like New York.

What's more, the companies that operate these multimillion-dollar machines also maintain their own strict operating specifications, which often go far beyond even what federal regulations and insurance providers require.

The details of what happened in the skies over New York City on Monday are scant. It's true, the weather was not ideal, but the conditions may have deteriorated after the pilot took off. Video purportedly showing the helicopter in flight before the crash suggests to me that the pilot may have been facing some kind of dire emergency, perhaps as he dealt with a mechanical issue. We won't know for certain what happened until accident investigators are given time to complete their investigation.

This isn't the first time a helicopter has crashed in New York, and unfortunately it probably won't be the last. But compared with other forms of transportation -- driving, especially -- helicopter accidents are extremely rare. When they do happen, they cause a flurry of public reaction, which is understandable but also unfair to the helicopter industry. It's not as if the city of New York is facing a pandemic of helicopter crashes. Far more people will be killed or hurt in car crashes in the city this week than in helicopters, but those incidents won't attract nearly as much attention.

I know something about the unwanted attention helicopter incidents in New York City can cause. As a teenager I worked at the East 60th Street Heliport in Manhattan, and have been around the industry my entire life. I was working the day a helicopter returning from Atlantic City, New Jersey, crashed in October 1989, killing both pilots and three senior members of the Trump Organization who were responsible for building the brand new Trump Taj Mahal casino.

My father was a professional helicopter pilot in the New York area for more than 40 years before he retired last year. He was flying a twin-rotor Boeing Vertol 107 from the rooftop of the Pan Am building on May 17, 1977; he finished his shift and went home, learning hours later from news reports on the radio that the flight crew after him was involved in a deadly crash atop the roof. That was the end of rooftop helipads in New York City and, a couple of years later, the end of New York Airways as well.

Since then, helicopter operations have steadily grown safer, even as the number of daily flights in and around New York City have increased. In each of the handful of crashes that have occurred since then, lessons borne of tragedy have been used to reduce the risks of helicopter flights even further.

Investigators from the National Transportation Safety Board now begin the painstaking task of piecing together what happened on Monday and why. Their work may take up to a year to complete. Calling for a blanket ban of helicopters in New York City after a crash like this isn't helpful in getting to the bottom of what caused it, but sadly it's typical of politicians who feel the need to weigh in on topics that are simply beyond their expertise.

Let the highly trained investigators at the FAA and NTSB do their jobs. Then we'll know what really happened and we can work to make sure something similar hopefully never happens again.