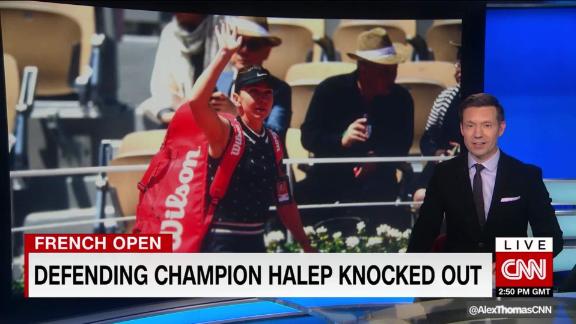 Simona Halep was humbled by teenager Amanda Anisimova in their rain-delayed quarterfinal at Roland Garros.

Amanda Anisimova once said she would have chosen to become a surgeon if not a tennis player.

You could describe her stunning upset of defending champion Simona Halep at the French Open on Thursday as clinical.

The 17-year-old American became the youngest tournament semifinalist in 13 years when with surgical precision she coolly dispatched Halep 6-2 6-4 in an hour and eight minutes on Philippe Chatrier court, a result that left open the possibility of an all-teen women's grand slam final for the first time since 1999.

That's because Marketa Vondrousova, 19, meets Johanna Konta in the other semifinal Friday.

"I really can't believe the result today," Anisimova told reporters. "Getting the opportunity to play against Simona, that's amazing, but how it ended is even crazier to me."

READ: Get to know Amanda Anisimova

The world No. 51 first needs to better eighth-seed Ashleigh Barty after the surging Australian progressed to a maiden grand slam semifinal -- mirroring Anisimova and Vondrousova -- by topping Madison Keys 6-3 7-5 in an outing on Suzanne Lenglen court that concluded at almost exactly the same time.

The matches were pushed back to Thursday, as well as the remaining two men's quarterfinals, due to rain washing out all play in Paris a day earlier.

Busy Friday on the way

Djokovic and Thiem face off Friday in an appetizing semifinal but Rafael Nadal against Roger Federer is the main attraction.

Due to the rain causing havoc with the schedule, both women's semifinals will take place away from center court starting at 11 am in Paris. The decision is both "unfair and inappropriate," according to WTA CEO Steve Simon.

"The four women who have played so well and made it this far have earned their right to play on the biggest stage," he said in a statement. "We believe other solutions were possible which would have been to the benefit of fans as well as all players."

Organizers, who are keen to finish the tournament on time, won't want to look at Friday's ominous forecast with intermittent rain predicted.

Anisimova's smooth power in mostly sunny conditions, especially her backhand, befuddled Halep, whose bid to become the first back-to-back female winner since Justine Henin won three in a row through 2008 came to a thudding halt.

She showed tremendous poise, not getting flustered even as Halep rallied in the second set, and rarely chose the wrong shot.

Anisimova struck an impressive 25 winners to just 24 unforced errors against one of the game's top movers and on the clay surface that can so often inflate the number of miscues. She missed the clay swing last year because of a foot injury.

"She is just incredible," US Fed Cup captain Kathy Rinaldi told CNN Sport. "We've known her since she was seven years old. She always stood out and had great qualities to become a champion and I think that showed through today.

"She's just really tough. She is obviously a very talented player as well, but really mentally solid and tough."

The 2016 French Open junior finalist dropped her racket after effortlessly hitting a splendid backhand down the line on a first match point, but hasn't dropped a set this fortnight to match Vondrousova.

"The backhand has always been stellar," said Rinaldi, who reached seventh in the rankings in 1986. "It's a beautiful stroke, it's just gorgeous. It's phenomenal. What else can you say?"

In the fourth round, Halep thrashed 18-year-old junior Wimbledon champion Iga Swiatek in 45 minutes but on Thursday it was indeed a teen who got the better of the Romanian.

Halep never totally recovered from losing seven consecutive games from 2-2 in the first, although the former world No. 1 did hold a break chance at 4-4 in the second.

Hanging on in that game, Anisimova earned her match point following a Halep double fault.

Despite the reverse, Halep said she wasn't disappointed with her tournament.

"I think that I have done everything I could today and this tournament, I'm happy with the result," she said. "It's not bad at all to make quarterfinals at a grand slam. Coming as a defending champion, the pressure was on."

She admitted to suffering from nerves -- not because of being the substantial favorite in the quarterfinal but because she was playing so well.

"Maybe my expectations for myself were big today," Halep said. "Maybe I couldn't handle the tension in my body so I couldn't play my best and I couldn't move at my best level."

Anisimova's parents moved to the US from Russia -- like the parents of Maria Sharapova and Sofia Kenin, who beat Serena Williams in the third round. But it was to provide more opportunities for her older sister Maria, who went on to play tennis at the University of Pennsylvania.

Barty was once also a top junior like Anisimova although her career appeared over when she stepped away from the game in 2014. She had stopped enjoying it.

Playing professional cricket thereafter -- she is still a cricket fan and keeping an eye on the World Cup in England -- Barty returned to tennis in 2016.

Her ranking has climbed every year since. Even if she loses against Anisimova, Barty will rise to a new career high of fourth, having been as high as fifth in doubles.

"I have grown as a person and obviously as a player as well," said Barty. "But I have had some heartbreaking moments. I've had some amazing moments. All in all, I have enjoyed every single minute.

"I think that's been the biggest thing, that I haven't had one ounce of regret. I felt like when I came back, it was my decision, we did it my way, and yeah, it's paying dividends."

The 23-year-old possesses an all-around game, including a wicked backhand slice, that has disrupted more experienced foes than Anisimova.

READ: How underarm serves are making a comeback in tennis

They will clash for the first time.

Kobe Bryant dies at age 41 in helicopter crash in California