The silver lining to Trump's incompetence 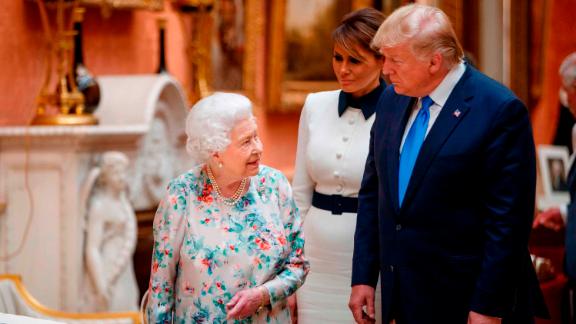 CNN's KFILE found instances over years where then real-estate developer Donald Trump planted fake claims that members of the royal family were interested in buying property at Trump Tower or joining Mar-a-Lago.

Commentators have been sounding the alarm almost on a daily basis, warning that President Donald Trump's words harm national security and weaken our standing in the world. They are largely wrong. In many cases, foreign leaders and citizens of the world alike have likely "priced in" Trump's erratic behavior and sidelined his pronouncements. If so, the result is a neutered presidency and an America that is safer because Trump is often not taken seriously.

For decades, Presidents have played critical roles in international affairs -- from Richard Nixon's détente with China to Ronald Reagan's force of will that toppled communism to Jimmy Carter's brokered peace between Anwar Sadat and Menachem Begin. In these and countless other examples, past Presidents advanced American interests and inspired the world by wielding both formal constitutional powers, as well as the authority granted by foreign leaders who accepted their statements as US policy.

This isn't the case with Trump, whose words foreign leaders can no longer take at face value. Fortunately, President Trump's incompetence in foreign relations, while not a cure-all, can moderate the damage that he might otherwise cause. The more exposure the world has to this President, the less he matters. After all, communication is a two-way street, and the audience plays a significant role in determining whether someone's words are accurate, meaningful, and safe to rely on.

Take, for example, Trump's rhetoric on North Korea. While the President recently said he is not bothered by new North Korean missile tests -- conflicting with the view of intelligence agencies -- he previously threatened nuclear attack (in his own way of course, by claiming that his button is bigger than Kim's).

In any prior administration, words such as these from the American President would place us at the precipice of war. But as norm-busting as they may be, we have become conditioned to view them as just the latest in an unbroken string of overheated comments. His words aren't newsworthy because they will all have real world consequences but because in many instances they won't -- despite being uttered by the leader of the free world, they are heavily discounted by the world just the same.

So, how should foreign nations react if Trump renews his threats to pull out of NATO, makes further statements that praise leaders of corrupt regimes, such as Russia's Vladimir Putin, or makes some other jaw-dropping pronouncement? Unless these leaders haven't been paying attention, they should temper any initial alarm by weighing these statements against often-contradictory commentary from other senior American officials, the State Department and the CIA. His track record shows that impulsive words may not result in action. Ultimately, despite Trump's rhetoric, the US has not pulled out of NATO, and it has levied sanctions on Russia. Moreover, routine rebukes of Trump's comments from foreign leaders reveal an international band of adults who are ready to sideline the US President.

Of course, as oddly comforting as Trump's lack of global credibility may be, it reflects a sorry state of affairs. This administration has luckily not faced an acute national security crisis, such as a 9/11-style terrorist attack or an imminent threat of war. As has been the case throughout our history, when such circumstances arise, America needs a reliable and respected leader to guide the nation. And the way in which the President acts in moments such as these could determine the course of human history.

President John F. Kennedy's approach to the Cuban missile crisis likely averted war. Conversely, President George W. Bush's fixation on weapons of mass destruction (which were never found) led to war with Iraq, resulting in the deaths of thousands of US service members and a power vacuum filled by al Qaeda, the group from which ISIS was later formed.

If faced with a national security crisis, Trump's incompetence could pose serious problems. The void of US leadership could also damage the US' global standing and push fledgling nations, such as Libya, to take their cues from Russia and China rather than from the United States. And then there's Trump's command over the nuclear arsenal, which is scary, given his penchant for tantrums. In a crisis, it's hard to know where Trump's impulses would lead the nation.

What's more, there have been instances when President Trump's words have foretold real policy movements with real-world consequences, such as his use of tariffs as an international trade tool with China and his threats of tariffs on Mexican goods in an effort to advance immigration-related ends.

But recognizing that he can cause damage does not mean that every oddball comment he makes will have a lasting impact. We are, for the time being, stuck with Trump and, fortunately, his incompetence has helped moderate what could otherwise be calamitous by spurring foreign leaders to ignore him.

What if foreign leaders are inclined to take him seriously and react as if his words had meaning? It is both my belief and continued hope that President Trump's journey to irrelevancy on the world stage advances by the tweet, continuing to take further root so that we will soon see the day when it will not only be reasonable for world leaders to ignore Trump but it will be the only rational thing for them to do.

On the international stage, the one constant in modern history is that the American President is taken seriously. This is one norm that we should all be thankful Trump has broken. And hopefully, it is a norm that can be quickly restored once he is out of office.

Here are the states restricting travel from within the US

Some counties still not seeing any confirmed positive coronavirus cases

Iowa Gov. Reynolds: 'The reality is the end is not in sight' (with full press conference)

Who should be self-isolating? Local Iowa health officials weigh in

White House projects 100K to 240K US deaths from virus

StormTeam 3: Rain chances for the rest of the work week