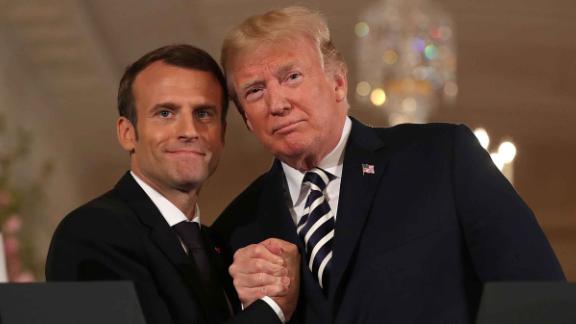 Ahead of President Trump attending the D-Day commemorations in Normandy, US Ambassador to France Jamie McCourt discusses relations between the two countries.

On May 22, as early planning for the D-Day anniversary celebration kicked into gear, Donald Trump Jr. retweeted a cartoon that, intentionally or not, suggested the impending tone for the upcoming meeting between President Donald Trump and President Emmanuel Macron -- two individuals who see themselves as leaders of the Western world.

His father is shown proudly, hands on hips, having just bodyslammed the Democratic donkey, a TV character carrying copies of The Washington Post and New York Times, and Macron, flattened and looking dazed, as tiny French flags and Eiffel towers circle his head.

On Thursday, the two world leaders who once proclaimed themselves BFFs and who now are barely prepared to share a baguette, will find themselves on the same Normandy beach.

The occasion should be a good one for mutual comity and friendship. It is, after all, 75 years since the large expeditionary force landed on the shores of Nazi-controlled France, with the goal of liberating the French people and restoring a form of democracy both countries had shared for a century and a half.

And yet somehow, despite this shared history, it is unlikely the two leaders will have a particularly productive meeting -- as the issues that divide them continue to overshadow the values that should unite them.

Take the Paris climate accords. More than two years later, and Trump remains steadfast in his decision to leave the accords, a cornerstone of Macron's philosophy and worldview. "I think (the) Paris (climate agreement) has turned out to be something that I made absolutely the right decision. Look at what's going on in Paris," Trump said, referring to the "yellow vest" protests, now petering out in France, that were sparked by Macron's efforts to restrain gas consumption with higher taxes.

In April, Macron only added fuel to the fire when a French official told European trade negotiators, "In accordance with the commitment of the President of the Republic, France is opposed to the initiation of any trade negotiations with countries outside the Paris climate agreement."

At issue was the pace and direction of trade talks between the European Union and United States -- a cornerstone of Trump's trade agenda. Explaining Macron's position, the official told Politico, "It is a question of values: Europe must be exemplary and firm in its defense of the climate. France has therefore indicated that it is voting against this trade mandate(s)."

Furthering the divide is Macron's categorical refusal to follow Trump into a battle with China over Huawei and its pioneering development of 5G, which France has embraced. "Our perspective is not to block Huawei or any company," Macron told Bloomberg News at a technology conference in Paris, referring to his belief in "cooperation and multilateralism," traits he shares with the bulk of his fellow European leaders.

Also, Iran will be at the top of whatever formal agenda there might be for their meeting this week. British Prime Minister Theresa May pointed out gently to Trump at their joint press conference in London that while "we both want to reach the same goal," Britain is standing by the nuclear arms reduction pact with Iran that remains in force for all the signatories -- after Trump withdrew the United States and slapped on a series of tough sanctions.

Macron may hardly be as gentle. Already, the seeds have been laid, as the International Atomic Energy Agency reported last week that Iran was continuing to respect the broad outlines of the agreement. Moreover, Macron could also be expected to point out that France has any number of important commercial and banking relationships with Iran, particularly a major Renault auto manufacturing plant, all of which have been suspended or torpedoed in the face of the Trump sanctions.

Officials close to Macron told Bloomberg that the French President also felt blindsided when Trump announced last year in a tweet that he intended to pull all US forces out of Syria forthwith. ISIS was defeated, so why keep any troops there? Trump mused. Macron, with French forces deeply invested there, did not share the same view. Indeed, it moved him to press even more urgently for the creation of a pan-European military force, which Trump sees as anathema to his view of an American-controlled NATO -- since the United States would no longer be in the driver's seat.

Part of these differences that will color any Trump-Macron get-together are even deeper atmospherics and domestic political realities. Macron has just emerged from a bruising six months. First, there were the yellow vest protests that all but paralyzed much of France every Saturday for months. Then there were the elections for the European Parliament when Macron's Republic on the Move-Democratic Movement ticket won 21 seats -- a squeaker behind Marine LePen's far-right National Rally with 22 seats.

Supporters of Trump, particularly Steve Bannon, hailed Le Pen's victory last month, though it was little more than she won three years ago. Macron "gambled big and lost," Bannon gloated. What Bannon clearly failed, or refused, to understand is that there is clearly a ceiling on far-right sympathies in France.

But there was another lesson from the parliamentary vote that will likely color Macron's interactions with Trump. Surging in the European Parliament voting in France and much of Europe were the Green parties, France's version coming in a close third behind Le Pen and Macron. And that gives little motivation to Macron to make nice to a President who cannot admit to the dangers posed by climate change.

So, is Trump or Macron likely to walk away from their meeting at the shore feeling good about the other? Hard to see how either could manage the kind of tilt that would make that possible, though both are certainly capable of grand gestures of public comity.

But such a feeling does not seem at all useful in terms of their most deeply held missions. Better simply to let sleeping dogs lie and allow events to prove one or the other right eventually.

My bet is on Macron.

Giving the gift of life

Christmas by the Lake returns this weekend