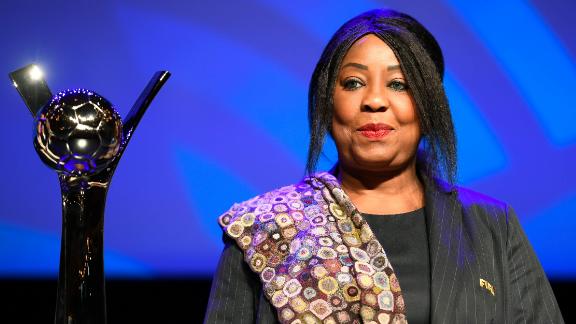 CNN speaks exclusively to FIFA Secretary General Fatma Samoura about her journey from the UN to FIFA, culminating in this year's FIFA Women's World Cup.

Gianni Infantino was reelected for a second term as president of football's international governing body FIFA on Wednesday having run unopposed.

Infantino, who was first elected in February 2016 after Sepp Blatter was ousted amidst corruption investigations, will now run until at least 2023.

No vote took place amongst FIFA's 211 member federations in Paris as Infantino, a Swiss-Italian lawyer who previously served as UEFA secretary general, was the only candidate.

Before being officially reelected, Infantino spoke at length about how FIFA has turned a corner under his stewardship, transformed from "being toxic, almost criminal, to being what it should be -- an organization that develops football."

He added that the governing body is now "synonymous with credibility, trust, integrity, equality, human rights."

READ: Why France is the heartbeat of women's football

READ: How football became a 'bright light' for Japan and Fukushima

Infantino's predecessor Blatter was handed a six-year ban from all football-related activities in 2016 as part of widespread corruption investigations within FIFA.

Lawyers representing FIFA also claimed that Blatter and two other formed officials had paid themselves $80 million in bonuses between 2011 and 2015.

Infantino has been responsible for expanding the 2026 World Cup from 32 to 48 teams, although plans to implement the expansion ahead of the 2022 tournament in Qatar were recently scrapped.

The Women's World Cup gets underway in France on Friday, where the USA is looking to defend its crown.