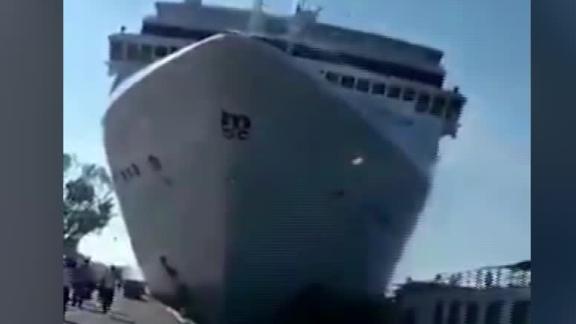 An out-of-control cruise ship slammed into a tourist boat and a dock in Italy.

A cruise ship crashed into a Venice dock on Sunday, hitting a moored tourist boat and sending onlookers running for safety in what one witness said resembled a "scene from a disaster movie."

The cruise ship, MSC Opera, rammed into the San Basilio terminal, and hit a smaller tourist boat -- the River Countess -- that was docked there, the local port authority told CNN.

Four people suffered "light injuries" in the accident, it said.

The incident happened at around 8.30am local time on the Giudecca canal, one of the busiest in the Italian city which is hugely popular with tourists.

Video on Twitter showed the huge cruise ship heading for the dock, shoving the smaller boat out of the way, and causing onlookers on land to flee.

"The noise of siren and of clash is totally frightening, looking like a scene from a disaster movie," wrote Twitter user Tancredi Palmeri, who posted a video of the dramatic collision.

The cruise ship operator, MSC Cruises, said in a statement that the vessel "experienced a technical issue" while heading towards the terminal for mooring.

"Investigations to understand the exact causes of the events are currently in progress," it said. In the meantime, the ship has "received authorization to be moored at the Marittima terminal, as planned."

From there, it will continue to carry out "passenger boarding and disembarking operations."

The local port authority for Venice told CNN its priority on Sunday was managing the accident, but that from tomorrow it would be looking to "finally create a solution to the traffic of large ships in Venice."

The country's Environment Minister, Sergio Costa, said on Twitter that the incident is a "confirmation of what we have been saying for a long time: Cruise ships must not sail down the Giudecca (canal).

"This is why for months we have been working with the ministers... to move them (the vessels) and we are close to a solution."

No summer sports for Belmond-Klemme