The one word Trump won't say in the United Kingdom 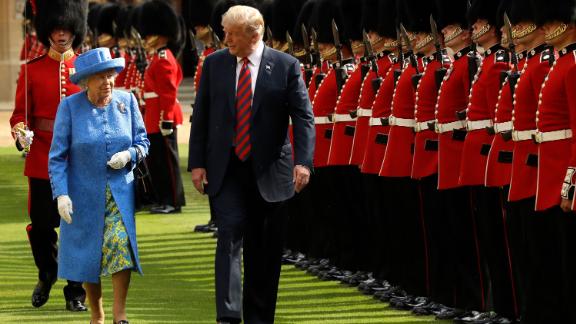 Ahead of President Donald Trump's state visit to the United Kingdom, CNN's Jeanne Moos reports on things he shouldn't discuss with his royal hosts.

Just days after his trip to Japan, President Donald Trump is headed to the United Kingdom, Ireland and France, where leaders are likely bracing themselves for a heavy dose of the President's usual antics: meddling in other countries' politics, lambasting US allies, and using time on foreign soil to lash out at domestic enemies.

Taking the show on the road

Trump has treated much of his own presidency as a 2020 campaign rally. And he might use his time overseas to interfere in other countries' politics.

The United Kingdom, one of our closest allies, is grappling with an existential political crisis, and Trump and his team haven't missed an opportunity to interfere. In March, Donald Trump Jr. weighed in and threw his support behind Brexit, writing that Prime Minister Theresa May should have taken his father's advice. Trump Jr. didn't specify what that advice was, although May said last year that the President told her to "sue the EU."

Meanwhile, National Security Adviser John Bolton said, "The US preference is for Britain to follow the course of what the people asked for and leave the EU." Rather than supporting two of our allies -- the UK and the EU -- through this unprecedented period, the Trump administration interfered and purported that Trump's advice would have forestalled the current Brexit impasse.

The President enjoys touting his supposed negotiating expertise -- despite a record of failed deals -- along with sticking his nose in other countries' political affairs. Never mind that he has failed to condemn Russia's interference in US elections; Trump is himself now meddling in elections abroad by endorsing candidates. Ahead of his trip to the UK, Trump announced his support for former foreign minister Boris Johnson to replace May, adding there might be a meeting with Johnson and Brexit Party leader Nigel Farage during his trip.

He can give it, but he can't take it. In September 2018, Trump accused China of interfering in US elections after a government-backed advertising insert appeared in an Iowa newspaper. When it comes to far-right candidates around the world, however, Trump seems happy to hand out endorsements, especially to those who say nice things about him.

Maybe he doesn't actually understand what is at stake with Brexit -- or maybe he just doesn't care. Either way, Trump's European holiday likely will include more election interference.

This is also a risk during his stop in France. While he and President Emmanuel Macron initially forged a bromance, they since have had differences on everything from climate change to Iran. Trump previously expressed support for Macron's biggest political rival, the far-right leader Marine Le Pen. With Le Pen's party beating Macron's in the recent EU elections and Macron continuing to make statements that run counter to Trump's policies, Trump could step up support for Le Pen while on French soil.

Our allies are likely too mature (and concerned with precedent) to express their views on 2020 candidates, but they expect Trump to meddle in their affairs.

Intelligence is at stake

We are on the brink of a direct confrontation with Iran. Russia is attacking and interfering in countries around the world. And North Korea's nuclear program appears to be marching forward. Yet when the need for top-notch intelligence couldn't be higher, Trump is doing everything possible to stop the flow of critical intelligence from our closest partners.

Instead of using his time in Europe to compare intelligence and coordinate plans, Trump has all but guaranteed that our allies will want to safeguard their intelligence from him -- and potentially from US counterparts down the road.

Trump has accused the UK of spying on his campaign, which British authorities have denounced as nonsense. He suggested that Attorney General William Barr investigate the UK and other intelligence partners for any roles they played in the counterintelligence investigation into Russian activities during the 2016 campaign.

They know Trump could manipulate their information for political purposes. And they'll have more reason to withhold intelligence that could be critical to keeping Americans safe if he again alleges "spying" on his campaign by the UK or more broadly suggests the irresponsible declassification of sources and methods.

To make matters worse, Secretary of State Mike Pompeo has threatened to halt cooperation and intelligence sharing with allies who adopt equipment made by the Chinese telecom company Huawei.

May and Macron may have concerns about Trump's affinity for Russian President Vladimir Putin (which were unlikely to be quelled by special counsel Robert Mueller's recent refusal to exonerate Trump on obstruction). One of the most important things Trump could do during his meetings with foreign leaders is assuage concerns about his views on intelligence.

Trump doesn't often lead with intelligence, but now would be the best time to start.

We know Trump's hobbies include implementing tariffs, focusing on the US trade deficit, and railing against NATO spending. During his Europe trip, we should expect him to indulge in all three.

The stock market plunged last week after Trump vowed to slap tariffs on Mexico, and the global economy may be reeling from additional shocks if he makes similar decisions on this trip. He's likely feeling pressure to perform: The trade war with China rages on, while a potential deal with Japan remains on ice. Trump's in search of a trade win, and if he can't get one, he might settle for scoring some political points instead. A trade deal with the UK is unlikely until Brexit is resolved, and that is going to leave the President flailing.

His hosts may be expecting him to pivot to his grab bag of other trade tricks -- like threatening again to enact auto tariffs on European cars or coming up with new tariffs if he doesn't get an agreement for greater purchases of US goods. Sprinkling in criticism of France and other NATO members, for example, for not meeting their commitments to spend 2% of GDP on defense may be another way Trump cudgels our allies.

But Trump should take the opportunity to forge stronger alliances during his trip, given the looming threat Russia poses to the Western order. That said, Russia is the one word that probably won't be on the President's lips while he's in Europe.

Because the President often inflicts more harm than good on foreign trips, his hosts probably will wish he'd just stayed at home. After all, Trump can tweet from anywhere. He doesn't need to travel overseas to engage in his daily routine of embarrassing himself and our country.

StormTeam 3: March may not be the end of winter