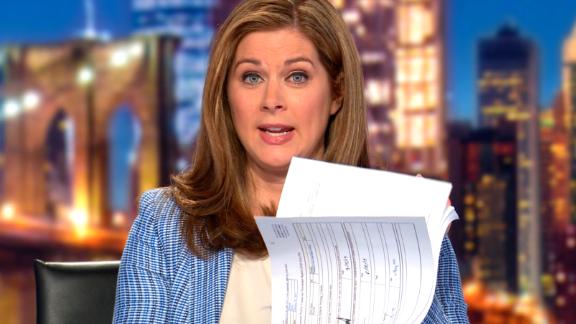 CNN's Erin Burnett outlines what we still don't know after President Donald Trump released his public financial disclosure report, amid calls from his opponents for Trump to release his tax returns.

Assuming that he's telling the truth -- and with this President this may be a leap -- Donald Trump made at least $434 million last year before expenses. His newly-released financial disclosure form shows much of this money came in the form of rent payments, asset sales, and golf course operations -- with numerous other income streams coming from as far away as the Philippines and Turkey.

What do the numbers really tell us? Aside from the fact that Trump seems very rich, they indicate that business is down at the President's Mar-a-Lago resort, but slightly up at the Trump International Hotel in Washington, DC, where one is likely to find sycophants from all over the world. The report, which Trump filed to comply with federal rules, also shows massive liabilities, including five loans of $50 million or more, one in excess of $25 million, and eight in the range of $5 million to $25 million.

On Thursday, Eric Trump issued a statement saying, "Our company [Trump Organization] had an exceptional 2018. Our iconic hotels, golf courses, commercial buildings, residential projects and other assets are the best in the world and unrivaled by anyone."

The most tantalizing figure that can be gleaned from the Trump filing is the aggregate of loans owed to Deutsche Bank, which total at least $130 million. And since many of the figures in the form are reported as a range, that number could be significantly higher. The bank is now embroiled in a dispute in the United States after President Trump (along with his three eldest children and private company) filed a lawsuit against both Deutsche Bank and Capital One in an attempt to prevent them from responding to congressional subpoenas.

Secrecy has always been a high priority for Trump, whether it's his refusal to release his tax returns, or his fight against House Democrats who want a look behind the wizard's curtain. During his fifty-year career, Trump depended on the fact that the public had little access to information about his wealth and income in order to build the myth of his self-made success. It was only until the New York Times obtained tax documents from 1985 to 1994 (which are far more reliable than the financial disclosure forms) and published a report earlier this month, that we learned Trump was in the middle of a decade-long struggle that saw him lose more than $1 billion while he was publishing books like "Art of the Deal."

And given the loose estimations in Trump's latest financial disclosure, the total value of Trump's assets are still murky. Is the golf club in Jupiter, Florida, really worth more than $50 million? In 2015, Trump's lawyer told local officials it should be taxed as if it were worth no more than $5 million. How did the estimate of its value jump 1,000% by 2018?

How about the Seven Springs mansion he owns in Westchester County, New York? On his financial disclosure form, Trump reported it to be worth between $25 million and $50 million. In 2012, however, Trump estimated it was worth $291 million. Real estate prices in the county have risen steadily since 2012, but Trump reports a sharp decline. What gives with the funky valuations?

We must take the latest financial disclosure with a boulder of salt. Trump rarely declares anything without considering how to cast it in a light that will serve him best. As Congress is discovering, he hates to be pinned down because solid data about the true nature of his finances can interfere with his own marketing efforts. For years he focused intently on the annual Forbes list of the wealthiest people in the world because he could game it through lobbying the editors and giving them his own unverified claims about his holdings. After years of enforcing this myth through media appearances, books like "Art of the Deal," or the reality TV show "The Apprentice," Trump campaigned for president in 2016, selling himself as a savvy dealmaker.

What we do know, thanks to recent reporting by the Washington Post, is this: revenue at Trump's Doral golf resort in Florida, along with hotels in Chicago and New York, is in decline. Plans for two new Trump hotel brands have been shelved, and his Trump Tower on Fifth Avenue has lost its glimmer in Manhattan's luxury real estate market. The occupancy rate for the commercial part of the tower has declined from 99% to 83% in the last seven years.

Amid all the conflicting data points, Trump's 2018 disclosure can only be considered a vague indicator of his assets, earnings, and liabilities. The most recent financial disclosure ultimately raises far more questions about the myth of Trump's wealth, and the potential conflicts of interest, than it answers.

While we wait for answers on these questions, we can amuse ourselves with some of the details revealed in the disclosure. One would have thought that his 2004 book "Think Like a Billionaire" would have earned him more than $201 last year, but it didn't. Then there's Trump's pension plan with the Screen Actors Guild, and an investment in gold valued somewhere between $100,001 and $250,000. As usual, information provided by the President only provokes more questions.

Duo arrested for meth and a gun in Northwood

North Iowa community reacts to finding of missing man's car: 'Relieved and heartbroke all at the same time'

President Trump to hold rally in Rochester on Friday