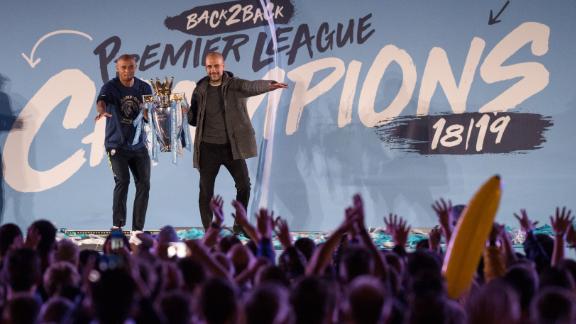 The former Oasis singer-songwriter joined the squad in a rendition of 1995 hit 'Wonderwall,' first in the away stand among the traveling fans before being serenaded by the squad in the changing room.

Celebrations continued long into the night as the squad flew from Brighton, where a 4-1 victory had secured the title, back up to Manchester to join the thousands of fans who had gathered outside the Etihad Stadium.

Manager Pep Guardiola was joined on stage by his victorious squad as fireworks in City's club colors lit up the night sky overhead.

The wild celebrations -- and no shortage of beer -- were well deserved after the type of tense title race the Premier League hadn't seen for years.

Prior to the 38th round of games, the league lead had changed hands a record 32 times.

Once again the top two won, but with Manchester City's virtuoso win over Brighton, Liverpool could only watch as its 2-0 victory over Wolves was rendered meaningless by the slimmest of margins.

Liverpool's relentlessness has been matched this season only by City's, and in the end it came down to a solitary point.

Despite the Merseysiders' heroic unbeaten run to end the season, City -- now back-to-back English champion -- was unflappable, even when Brighton took a shock lead.

That early slip-up, which allowed Brighton to score an the 27-minute mark, was greeted by a thunderous cheer some 250 miles northwest.

Coupled with Liverpool's early opener from Sadio Mane, City falling behind allowed the Reds to climb into top slot and, tantalizingly, within touching distance of the club's first league title since 1990.

As the day wore on, though, the natural order of this 2018-19 Premier League season was restored.

City talisman Sergio Aguero restored parity on the south coast just seconds after the Seagulls had the temerity to score, before Aymeric Laporte headed in a second.

Then, just after the hour mark, Riyad Mahrez made it three. Ilkay Gundogan added the icing on the cake 10 minutes after that, but by then Livepool were done.

The victorious squad returned to Manchester late Sunday night, with manager Pep Guardiola saying that this had been the toughest to win -- that Liverpool had ridden his team's tails all the way to the final whistle, raising the level of competition along the way.

His club captain, Vincent Kompany, who has won four titles since joining the Citizens back in 2008, said that this one ranked as the best.

You can only beat what's put in front of you, but when you have to contend with Guardiola's City doing the same -- but better -- week in, week out, reaching that pinnacle is all but impossible.

The job was made harder, Liverpool manager Jurgen Klopp said, when that Brighton goal billowed City's net and Anfield answered with a corresponding roar.

"It's difficult to prepare a team for a situation like that, to say: 'If we score and Brighton score, stay calm,'" he said.

"It was going nuts. Then it was difficult. Then it calmed down and it was clear when the atmosphere was not that ecstatic any more that something happened at Brighton which we didn't like."

Klopp congratulated Guardiola, whose team finished just one point ahead of the slick, comprehensive side the Liverpool manager has created.

It was all he could do in the face of the Manchester club's perpetual excellence.

"They played an incredible season. We did as well, but (City) won it, and congratulations. Ours was a really good season, an unbelievable season ... it's just really exceptional."

While not downplaying City's achievement in retaining the title -- the first team to do that since Alex Ferguson's Manchester United a decade ago -- Klopp acknowledged the clout that City has with the resources provided by its Abu Dhabi owners.

"As long as City are around with the quality and the financial power that they have then it's not like any other team will pass them easily," he said.

"That's clear. We need to be very, very close to perfection to win the Premier League, as long as this is the case."

Eye on the European prize

But now that the dust has settled, Klopp has one final chance to bring some long-awaited silverware to the Kop -- and make up for his team's heartbreaking loss against Real Madrid in Kiev a year ago.

While retaining the league was one of Guardiola's key priorities, for a club with the investment and ambition of Manchester City, the Champions League remains the key prize.

The Spaniard has won Europe's top club competition twice, in 2009 and 2011 with a Barcelona team that is widely considered one of the greatest of the modern era.

But since leaving the Catalan giant, the trophy has eluded him. The manager, who went on to take a sabbatical before returning to coach Bayern Munich and now City, fell short again this year, this time at the quarterfinal stage.

This year's competition, which saw two days of breathless twists to bring Liverpool and Spurs to the final, has been a wild ride.

And amidst the fog of disappointment that comes with falling just short of a first title in 29 years, Klopp is already looking forward to June.

With a smile, he reminded journalists that, for his team anyway, there was "still a bit to come."

Iowa woman arrested for embezzling over $150,000 is sentenced

Woman found dead in Iowa was daughter of Minnesota justice

Mayor Norton speaks with KIMT after State of the City address