Comey was true to himself, unlike Barr and Rosenstein 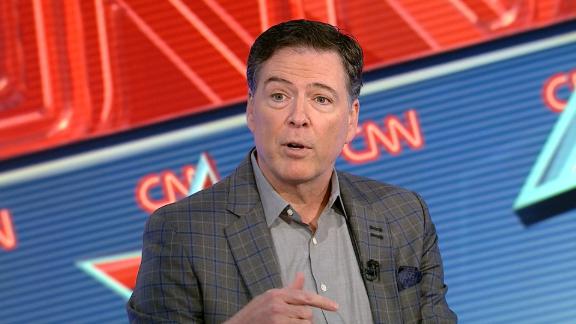 Former FBI Director James Comey says he believes Attorney General William Barr has lost a lot of his reputation after his handling of the release of special counsel Robert Mueller's report.

Former FBI Director James Comey made news on two fronts at a CNN town hall Thursday: he concluded that President Donald Trump might well be compromised by the Russian government, and he offered a blistering assessment of top Justice Department leaders William Barr and Rod Rosenstein.

Asked by CNN's Anderson Cooper whether it is possible the Russians have leverage over Trump, Comey responded with a terse "yes."

The President's relationship with the Kremlin has been the subject of much debate, with some lawmakers going so far as to suggest Trump might be a foreign asset. The White House has insisted such allegations are absurd.

But Comey's speculation Thursday night mirrors that of experts who point to a series of concerning interactions between the President and Russia. These include Trump publicly encouraging the Russians to attempt to steal Hillary Clinton's emails, as well as countless contacts between people in Trump's close orbit and the Kremlin. They also include the President's attempt to interfere in the FBI's Russia investigation by asking the FBI director to drop the investigation into fired national security adviser Michael Flynn.

Since Comey's subsequent firing, the White House has engaged in a full-on attack of the former lawman, an attempt to impugn his character and undermine his reputation. The reason almost certainly stems from Comey's role as a direct witness to alleged presidential obstructive behavior, as well as the concurrent view -- held by many -- that the former FBI director is a credible messenger.

For his part, Robert Mueller appears to agree, as Comey's views are cited throughout the special counsel's report.

In addition to his assessment about Trump and Russia, Comey did not hold back at the town hall on his unvarnished assessment of the two men Trump most recently chose to lead the Justice Department.

He described Attorney General William Barr as someone who has "lost most of his reputation" in the way he handled Robert Mueller's conclusions, with the attorney general appearing to run interference for the White House at the expense of DOJ's treasured independence. "You lead an institution that belongs to the American people, not the President," Comey said.

As for former Deputy Attorney General Rod Rosenstein, who prepared the memo critical of Comey's handling of the Hillary Clinton case that Trump used as a pretext for Comey's firing: the former FBI director described him as a man of accomplishment, but not of strong character. He slammed Rosenstein for his praise of Trump's respect for the rule of law.

Although his rebuke of both Justice Department leaders was certainly scathing, I believe it is understandable once one pauses to reflect on Comey's own decision making throughout the torrent of events in 2016 and 2017.

As someone who once served under him, I witnessed countless times his efforts to assess tough issues and try to make decisions that were both ethical and in the best interest of our institutions. Often these decisions came at great personal cost to himself (such as his actions in the Hillary Clinton case) as he sought to steer the FBI through troubled political waters.

For many inside the FBI, Comey's willingness to serve as a shield stands in stark contrast to the manner in which Barr and Rosenstein have handled issues in the Trump era. Their goal appears to have been their own survival, even if protecting themselves risked politicizing the Justice Department -- and turning it into a political arm of the White House.

Although good people of all political stripes will debate certain actions by Comey as director (and he has admitted that not everything he did was done perfectly), there is one line of attack from his critics that is the most telling. He has frequently been labeled "sanctimonious" as he preaches the importance of strong ethical leadership and about his concern for the direction the country is headed.

But when one surveys the current leadership of the Justice Department, and its apparent fealty to a White House that lies with stunning regularity, if the worst we can say about Comey is that he is too firmly moored to his values, perhaps we should all take a moment to look in the mirror.

Grocery store chain is moving into the banking business

Teens plead not guilty to double-stabbing in Mason City

Rochester men plead not guilty to having thousands of oxycodone pills

$35 million project in Austin is set to break ground

Juneteenth is now a federal holiday