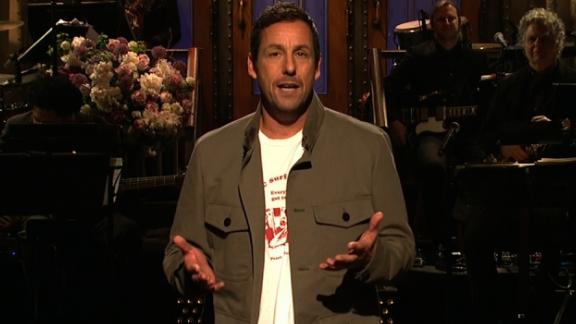 Adam Sandler opened his return to SNL with a suitably fitting song about being fired, before closing out with a musical tribute to actor and fellow former castmate Chris Farley.

Adam Sandler had "Saturday Night Live" fans cracking up at his song about why he was fired and cheering the revival of "Opera Man" during his hosting gig.

But by the end, he had them in tears.

Sandler closed out the show with a musical tribute to actor and fellow "SNL" castmate Chris Farley, who died in 1997 from an accidental overdose of cocaine and morphine. Farley was 33.

The song, originally performed by Sandler on his Netflix special "100% Fresh," referenced some of Farley's most famous "SNL" characters and sketches, like motivational speaker Matt Foley, "Gap Girls" and "Lunch Lady Land."

Sandler also shared some personal memories of his friend in the song.

Sandler dealt with Farley's heavy drinking and how he wasn't worried when friends warned him he'd end up like John Belushi and John Candy.

"He said 'Those guys are my heroes, that's all fine and dandy,'" Sandler sings.

Sandler also recalled a moment when he saw Farley in the office crying as he listened to a song by KC and the Sunshine Band. When Sandler asked why the song was making him sad, Farley said it reminded him of his dad.

"And when they ask me who's the funniest guy I ever knew, I tell them hands down, without a doubt, it's you."

"This was extraordinary. Watch it if you missed it. Watch it again, even if you saw it the first time," wrote New York Times culture reporter Dave Itzkoff.

"This is just great, @AdamSandler. You brought him back for a few minutes," NBC host Willie Geist said.