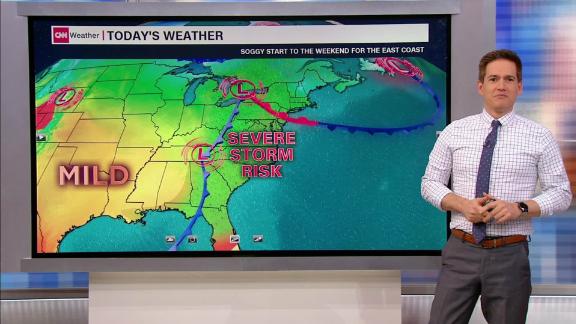 Severe storms will move into the Mid-Atlantic states Friday. CNN Meteorologist Ivan Cabrera has today's forecast and how this will affect the start to your weekend.

Congrats to Kyler Murray. The Oklahoma quarterback was picked No. 1 in last night's NFL draft by the Arizona Cardinals. Here's what else you need to know to Get Up to Speed and Out the Door. (You can also get "5 Things You Need to Know Today" delivered to your inbox daily. Sign up here.)

Joe Biden is finally in. The former vice president joined 19 other Democrats in the 2020 presidential race with a video that explicitly criticized President Trump's response to white supremacists' 2017 march in Charlottesville, Virginia. The President fired right back, welcoming Biden to the campaign fight by reviving his "Sleepy Joe" moniker. His Democratic rivals joined in, too, with many highlighting that the Democratic Party has moved more to the left than he has. And Biden's political past popped up, after it was revealed that he has expressed "regret" to Anita Hill for how she was treated during the 1991 hearings for Supreme Court Justice Clarence Thomas. Hill said Biden doesn't understand the damage he caused.

Biden would have to be considered the front-runner in the Democratic race, according to most polls. And many political observers (including Trump himself) consider Biden the biggest threat to the President in the Rust Belt and Midwest. Of course, others think the gravest threat to Biden's bid is ... Joe Biden. He can be a gaffe machine (though one wonders if that even matters in the Trump era), and his earlier runs for the White House didn't end well.

Worshipers of all faiths in Sri Lanka are being urged to pray privately at home as fears of more attacks linger. People have been told to avoid houses of worship, as the country enters the first weekend since terrorists bombed churches and hotels in the island nation. Sri Lanka's Prime Minister says security forces are arresting terrorist "sleepers" who might still activate attacks. Meantime, the death toll in the bombing was revised down significantly to 253 people. A statement from Sri Lanka's health ministry said getting an accurate death toll in the bombings "is challenging" because of the ways people died.

A measles quarantine is in effect at two universities in Los Angeles. More than 100 students and staff at UCLA and Cal State LA -- who've been exposed to a confirmed case of measles and can't prove they've been vaccinated -- were told to stay home, avoid contact with others and notify public health officials if they develop symptoms. Just this week, the US hit a record with the most measles cases since the highly contagious disease was declared eliminated in this country in 2000. There have been 695 cases in 22 states so far this year.

When the North Koreans handed over Otto Warmbier in 2017, they also handed over something else: a $2 million bill for his medical care. This shocking revelation came from two people familiar with the situation. North Korea insisted the US sign a pledge to pay the bill before releasing Warmbier, an American college student who was held by the North as a prisoner. He died a few days after making it home. President Trump was later told about the bill, but as of yet, it has not been paid. The North Koreans didn't bring up the bill during Trump's two summits with Kim Jong Un, but it could come up at future talks.

Gallup puts out a big annual report on how happy everyone is -- or isn't -- in the world. The latest results aren't so good. Levels of sadness, anger and fear reached record levels in 2018, according to the report, based on thousands of interviews with people in 140 countries. Chad took home the dubious honor of being the world's most unhappy country. There were a few rays of sunshine, though. People reported a slight decline in stress and also said they experienced enjoyment and laughed or smiled a lot the day before their interviews. And the world's happiest and most positive country? Paraguay.

Big, buggy eyes. And only about the size of a quarter. Come closer and get a better look at the strangest crab that ever lived.

Off the deep end

Didn't get enough Lady Gaga and Bradley Cooper in "A Star is Born?" Don't worry, Cooper is dreaming up a reunion with his superstar co-star.

When this teacher ran out of sick days while caring for his cancer-stricken daughter, his colleagues gave him 100 of theirs.

This superstar actress appeared in public for the first time in a year after she seemingly vanished following a massive tax evasion scandal.

Director Ava DuVernay, seeking support for fellow director John Singleton, who is in a coma after suffering a stroke

Not all heroes wear capes, like this window washer who dressed up like Captain America and visited with a little boy in his hospital room. (Click to view.)

What to Look For in Disinfectants and Sanitizers

Custody arrangements during a pandemic