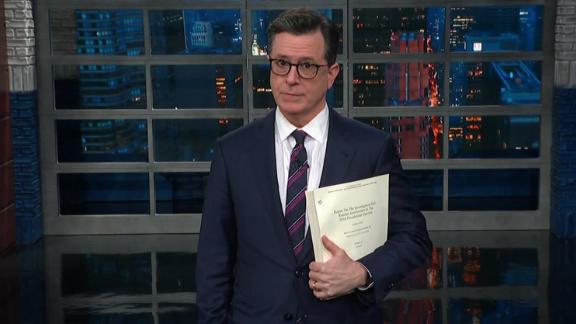 The Mueller report is finally out and late-night hosts such as Jimmy Kimmel and James Corden had a field day with it — or at least the non-redacted portions of it.

It's Good Friday. Let's mark the day by checking out how it's observed around the world.

Here's what else you need to know to Get Up to Speed and Out the Door.

(You can also get "5 Things You Need to Know Today" delivered to your inbox daily. Sign up here.)

So, what now? It seems to be the key question now that the world has finally seen the redacted version of special counsel Robert Mueller's report. Though it clears Donald Trump and his 2016 campaign of colluding with the Russians, it lays out just how hard the Russians worked to improve Trump's electoral prospects -- and that Team Trump seemed perfectly fine with that assist from a foreign power. Still, Mueller didn't feel he had enough evidence to find any of this criminal.

The report's section on possible obstruction of justice by Trump is much more disturbing. It paints a picture of a President determined to put an end to an investigation that he considered to be unjust. The only thing that stopped him? His own aides, many of whom refused to carry out his orders. Mueller basically had everything he needed to bring obstruction charges against Trump if he'd wanted to. But he didn't. He's leaving that decision on Congress' doorstep.

So, will House Democrats start the march toward impeachment? They seem divided. Party leaders like House Speaker Nancy Pelosi and Majority Leader Steny Hoyer seem to be losing their appetites for it (because they know the GOP-led Senate wouldn't convict Trump), yet liberal firebrands like US Rep. Alexandria Ocasio-Cortez are all for it. So, Dems have a big decision to make. The nation does, too. The 2020 presidential election -- now less than 19 months away -- may be the real final verdict on Trump.

You can read the report here, along with its 11 key lines and 10 takeaways.

While they're not "excluding any hypothesis at this stage," investigators in Paris seem to be checking out whether an electrical short-circuit caused the fire that devastated Notre Dame Cathedral. They've also been questioning workers at companies that were doing renovation work at the time. Despite the destruction, we're learning how centuries of priceless treasures were saved from the flames. And donation pledges continue to come in for Notre Dame's restoration, totaling more than $900 million so far.

North Korean leader Kim Jong Un will be hitting the road again. He'll go to Russia later this month to meet with Russian President Vladimir Putin. The Kremlin didn't provide any other details about the meeting. It'll be interesting to see what comes out of this summit, since nuclear talks between North Korea and the US have stalled out since Trump and Kim met earlier this year.

When Allen Capers died in a South Carolina prison on New Year's Eve 2017, his family alleges it happened under the most shocking of circumstances. They say he was stabbed in his cell, then dragged into the prison yard by correctional officers who left him there to die. Capers' family has sued the state's Department of Corrections, and an attorney has released surveillance footage that appears to show a wounded Capers in the prison yard, trying to get to his feet while guards approach him. They aren't seen in the video giving him medical attention. A Corrections Department spokeswoman said "more should have been done" to help Capers and the staff's actions are being reviewed.

Some powerful storms will pound the South today. The storms have already killed three people in Mississippi and Alabama, and now they are rolling through the Deep South (it's raining sideways here in Atlanta) and into the Carolinas and Mid-Atlantic states. Parts of Alabama, Florida and Georgia are under tornado watches. The threat of severe thunderstorms and tornadoes will be high, especially in North and South Carolina. And states like New Jersey and New York are prepping for heavy rain and flooding tonight and tomorrow.

If the Sesame Star had it his way, he'd solve all family vendettas with ... respectful conversation. But that probably wouldn't make for a great finale.

Tonight's full moon won't actually be pink -- but it'll be larger than average and definitely worth a peek at the sky.

Running late to an interview won't get you out of a traffic ticket -- unless you're this guy.

Happy birthday to the 98-year-old veteran from Oregon who is fitter than we'll ever be.

David and Louise Turpin, the California couple that pleaded guilty to abusing and torturing 12 of their 13 children, will be sentenced today. But first they'll have to hear what promises to be gut-wrenching testimony from their kids.

Activists glued themselves to this object in London to protest "disastrous inaction" on climate change.

Derek Chauvin: What we know about the former officer charged in George Floyd's death

Pool sales on the rise while pools remain closed