Police say she was infatuated with the Columbine shooting. She's not alone 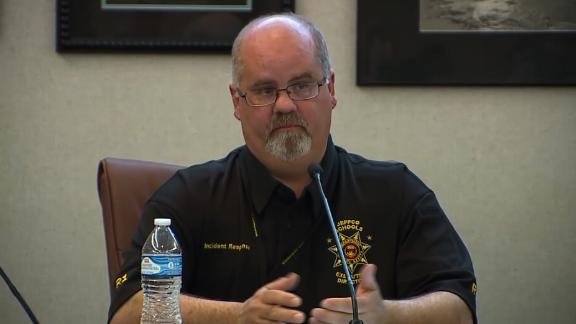 Authorities discussed their mindset when assessing the threat posed to Colorado schools by Sol Pais, an 18-year-old who they described as "infatuated" with the Columbine shooting. Pais was found dead from an apparent self-inflicted gunshot wound, authorities said.

For John McDonald, there's nothing new about people infatuated with Columbine coming to visit.

"We know that Columbine continues to attract people from around the world," McDonald, the executive director of Jefferson County Department of School Safety, said on Wednesday.

He has good reason to issue that message. Nearly 20 years after the mass shooting at Columbine, an entire subculture of online fans, sometimes called "Columbiners," remains infatuated with the killing and the teenage shooters.

They romanticize and idealize the killers, Dylan Klebold, 17, and Eric Harris, 18, on websites like Tumblr, where they post memes, videos or fan art of the shooters. Other times they write love poetry, fan fiction, or Photoshop photos of the killers surrounded by hearts.

"There is a curiosity industry around them amongst very crazy people," CNN analyst Juliette Kayyem said. "These people have been showing up to Columbine over the last four, five, six months, and just to end this, that's exactly what you heard the school official say, this is not over."

This bizarre subculture was particularly relevant on Wednesday after the FBI said a high school student who was "infatuated" with the Columbine shooting traveled from Florida to Colorado and made credible threats.

The threats forced the closure of schools in 19 districts in Colorado on Wednesday as the FBI searched for the suspect. The woman, 18-year-old Sol Pais, was found dead on Wednesday afternoon from an apparent self-inflicted gunshot wound, authorities said.

Authorities said she bought a pump-action shotgun upon arriving in Colorado, and described her as wearing a black T-shirt, camouflage pants and black boots.

That's the same weapon and a similar outfit used by the Columbine shooters in 1999.

The mythology of Columbine

Ralph Larkin, the author of the 2007 book "Comprehending Columbine," said most of these Columbiners are young teenage girls who romanticize and deify the shooters, partly because they relate to the shooters.

"I think that the Columbiners generally see themselves as outcasts," he added.

Dave Cullen, who wrote a book about the Columbine shooting, similarly said these fans empathized or related to the mythology of the shooters as outcasts.

"They fit the mold of the imaginary (shooters) that the world believes," he said. "That's why they're identifying with them, and with the whole mythology of (the shooters) being these kids who stood up for the little guy and to bullies everywhere. (They're) heroes of the loner outcast type."

Indeed, this community cannot easily be dismissed as a few anonymous trolls.

A 2015 article in Transformative Works and Cultures, a peer-reviewed academic journal that examines popular media and fandom, dug into the dark fandom of Columbine by analyzing the fan art, videos and memes about the shooters. The article offered several explanations for the community's allure.

"Fans may appear to identify or even empathize with (the shooters) as social outcasts, or perhaps they are more drawn to the lure of the forbidden of joining such a provocative fandom," wrote the author, Andrew Ryan Rico. "Or, and this is especially relevant considering the ubiquity and accessibility of technology, they might just be doing it for the attention."

The community is significant enough that last August, Tumblr announced changes to its community guidelines that banned the "glorification of violence and its perpetrators," Tumblr said on its website.

"Not all violence is motivated by racial or ethnic hatred, but the glorification of mass murders like Columbine, Sandy Hook, and Parkland could inspire copycat violence," the website said.

"With that in mind, we're revising the Community Guidelines on violent content by adding new language to specifically ban the glorification of violent acts or the perpetrators of those acts."

Being obsessed with Columbine does not, on its own, make someone at risk to commit violence. Still, a number of mass shooters in the past two decades have been inspired by or looked up to the Columbine shooters.

In 2007, the Virginia Tech shooter, Seung-Hui Cho, sent NBC News a manifesto and a series of videos that mention "martyrs like Eric and Dylan," a reference to the two Columbine shooters.

Adam Lanza, the man who carried out the massacre at Sandy Hook Elementary School in Newtown, Connecticut, was obsessed with mass murders, in particular at Columbine, according to an FBI report.

A woman who befriended Lanza online said he was "singularly focused and obsessed with mass murders and spree killings" and looked upon school shooters "with respect and understanding," according to heavily redacted FBI documents.

And in 2014, police said Darion Marcus Aguilar, a 19-year-old who went on a shooting rampage at a Maryland mall, was so obsessed with the Columbine shooting that he dressed up in an outfit reminiscent of the shooters and posted a picture of himself to Tumblr.

Police believed that he had studied the shooting and was trying to mimic it.

"Aguilar's weapon, attire, backpack containing explosives and method of suicide were all similar to those used in the Columbine incident," said a Howard County police statement at the time.