What biology tells us about presidential ambition 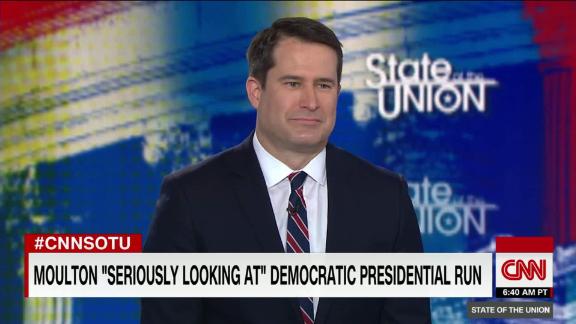 In an interview with Jake Tapper, Congressman Seth Moulton says he will decide soon on a run for the White House in 2020

Life is full of long shots that people are willing to chance: buying a lottery ticket, auditioning at a Broadway casting call, applying to a top-tier university (unless admissions happens to believe you're a water polo star). In a textbook case of long shot optimism, there are now 16 declared candidates for the Democratic Presidential nomination, and a handful more in the wings: Amy Klobuchar, Bernie Sanders, Beto O'Rourke, Cory Booker, Elizabeth Warren, Kamala Harris, Kirsten Gillibrand, and all the other hopefuls. The American dream lives on -- with hard work and a war chest, anyone can be a presidential candidate 20 months out from the election.

The question is why anyone should want to be one. These people have signed up for slogging through New Hampshire snows, attending town halls in Iowa, smiling and shaking hands and endlessly repeating the same phrases with just the right amount of passion in their voice. And despite all that effort, either 15 or all 16 of them will fail at their ambitious goal.

What does it take to inspire such a marathon? Of course, there are external motivating factors: Defeating Trump, improving American lives or improving the political culture. But there is also quite possibly an internal factor: Brain chemistry which, at first, seems exactly the same in humans as in other mammals, but turns out to be very different.

It all has to do with a chemical messenger called dopamine, which is released from a part of the brain called the mesolimbic dopamine system. Dogma used to be that dopamine released from neurons there mediates pleasure -- after all, cocaine works by amplifying these dopamine effects.

In actuality, dopamine is subtler than that. Take a human, monkey or lab rat, and train them as follows: when a light comes on, it signals the start of a task -- press a lever 10 times, and you get a reward (e.g., a grape for a monkey). Once this reward system is learned -- see the light, press the lever, get the treat -- when in the sequence is dopamine released from neurons? Not when the reward is delivered. Instead, it's when the light comes on, signaling the start of one of these tasks. Ah, it's the light, I know how this works, I'm totally on top of lever-pressing, this is going to be great.

Rather than being about pleasure, dopamine is more about the anticipation of pleasure.

Furthermore, if that anticipatory rise of dopamine doesn't occur, there's no lever pressing. In other words, dopamine supplies the motivation needed to do the work required for that much-anticipated reward (and, as an aside, there's lots of evidence that there are problems with this dopamine system in people with major depression, a common symptom of which is loss of motivation).

Now for something really interesting. In the circumstances just described, if you do the work, you receive the reward 100% of the time, guaranteed. Suppose things change so that instead when you do the work, the reward appears only half the time. What happens now when the light comes on? Far more dopamine release than when the reward is certain. Why is this? You've just introduced a key word into this neurochemistry, namely "maybe." Simply the possibility of a reward fuels goal-directed behavior like mad, showing the power of intermittent reinforcement. Press that lever some more, and maybe this time you'll be rewarded.

This seems to be a basic piece of mammalian brain wiring. But there are two key differences between us and other species when it comes to the anticipatory, motivating release of dopamine. Which could help explain the drive of Amy, Bernie, Beto and the rest (as well as explain any Republicans or independents contemplating this venture).

First, for a monkey or rat, the whole signal, lever-press, reward procedure plays out over the course of seconds -- no lab rat will work now for a reward tomorrow. But we humans must be able to maintain that motivating dopamine surge for crazy long lengths of time to achieve long-term goals. After all, we lever-press to get good grades to get into a good college to get a good job to eventually get into the nursing home of our choice. We lever-press to improve the planet for our grandchildren.

Depending on our theological ilk, we lever-press at resisting temptation to attain paradise post-mortem. And thus, odds are that each of these candidates, in those dark moments at night on the road where they'll be wondering why they're putting themselves through this, will keep going thanks to an impressive flood of dopamine.

Humans differ from other species in a second crucial way. Consider a circumstance where endless effort is required and there's only a 1-in-16 chance of getting a reward. Any sensible rat would walk at such lousy odds. It's just not worth the effort. But we can be fooled or fool ourselves into thinking that our chances are better than reality.

After all, that's what the honorary neuroscientists who invented Las Vegas understand, where thanks to their effective manipulation, you're convinced that a one-in-a-gazillion chance is actually worth betting on. And thus, each candidate is likely to carry in their head a dopamine system fueled by a distorted sense of the odds: I've got the right demographic, the right resume, the right economic policy, the right smile to go all the way. Those other 15 don't have a chance.

This human capacity to seemingly sustain dopamine release for long periods in the face of miserable odds is how people invent new vaccines, build business empires, or end seemingly intractable societal ills. And it helps explain why this horde of candidates, intent on beating the odds, will be spending months kissing babies in places like Des Moines. All so that -- maybe, just maybe -- they eventually occupy the West Wing.

Rochester girl killed in crash now identified as the driver

CG Public Health says COVID is on the rise, pleads for people to get tested

Over 23,000 speeding tickets given in Minnesota during February and March