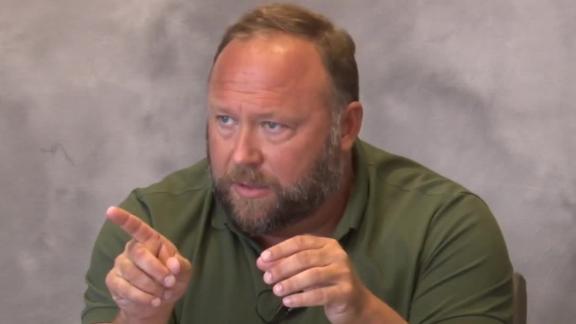 Broadcaster and conspiracy theorist Alex Jones said it was a "form of psychosis" that caused him to believe certain events --- like the Sandy Hook massacre -- were staged.

Broadcaster and conspiracy theorist Alex Jones said it was a "form of psychosis" that caused him to believe certain events --- like the Sandy Hook massacre -- were staged.

On December 14, 2012, 20 children and six adults were killed by 20-year-old Adam Lanza in Sandy Hook Elementary School in Newtown, Connecticut.

Jones, who founded InfoWars.com and hosted a three-hour news-talk radio program which he said was carried on more than 160 stations, had repeatedly suggested in the past that the Sandy Hook shooting was a "giant hoax" carried out by crisis actors on behalf of people who oppose the Second Amendment.

InfoWars has also suggested the September 11 attacks were an inside job orchestrated by the US government.

This week, Jones acknowledged the shooting was real during a sworn deposition he made as part of a defamation case brought against him by Sandy Hook victims' families.

"And I, myself, have almost had like a form of psychosis back in the past where I basically thought everything was staged, even though I've now learned a lot of times things aren't staged," he said. "So I think as a pundit, someone giving an opinion, that, you know, my opinions have been wrong, but they were never wrong consciously to hurt people."

He said it was the "trauma of the media and the corporations lying so much" that caused him to distrust everything, "kind of like a child whose parents lie to them over and over again."

"So long before these lawsuits I said that in the past I thought everything was a conspiracy and I would kind of get into that mass group think of the communities that were out saying that," he said. "And so now I see that it's more in the middle... so that's where I stand."

The lawsuits against Jones

The broadcaster faces multiple lawsuits from families of students and educators killed in the Sandy Hook shooting. Two lawsuits were filed in April 2018 by three parents whose children were killed, and a month later, he was sued by the families of six victims, who were joined by an FBI agent who responded to the shooting.

The first two lawsuits each sought at least $1 million in damages for "a severe degree of mental stress and anguish" and "high degree of psychological pain" that the parents suffered as a result from Jones' coverage of the shooting, in addition to past and future damage their reputations may suffer.

The May lawsuit names Jones as the "chief amplifier for a group that has worked in concert to create and propagate loathsome, false narratives about the Sandy Hook shootings and its victims, and promote their harassment and abuse." The suit also names six companies, including entities tied to the InfoWars website.

"We've clearly got people where it's actors playing different parts of different people," the lawsuit quotes Jones as saying in March 2014. "I've looked at it and undoubtedly there's a cover-up, there's actors, they're manipulating, they've been caught lying and they were pre-planning before it and rolled out with it."

But Jones later addressed the claims on his website saying it was "all out of context," and that it wasn't "even what I said or my intent." He has described the suit as an attack on him and the First Amendment.

Last year, major social media platforms like YouTube, Facebook and Twitter all said they had removed content from Jones or InfoWars because it violated their policies. YouTube removed many channels associated with InfoWars -- including The Alex Jones Channel , which had 2.4 million subscribers and videos that had been viewed over 1.5 billion times.

"When users violate ... policies repeatedly, like our policies against hate speech and harassment or our terms prohibiting circumvention of our enforcement measures, we terminate their accounts," a YouTube spokesperson had said.

Iowa teacher accused of secretly recording 2 females at his home

19 nurses of a Nebraska hospital unit gave birth to 19 babies in 2019. The group picture was adorable

Rochester authorities searching for wanted man who escaped from hospital

What do people in Rochester think of gun control?

Parenting in the modern era