Puerto Rico's governor should not stoop to Trump's level 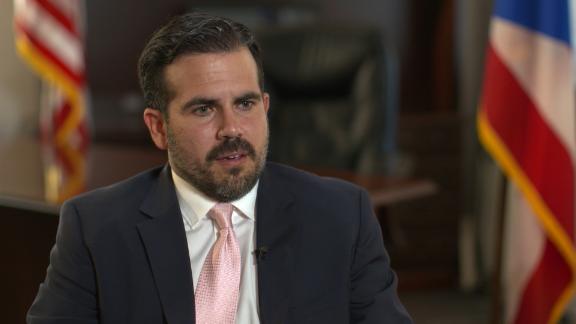 In an exclusive interview with CNN, Puerto Rico Gov. Ricardo Rosselló said he would not sit back and allow his officials to be bullied by the White House.

A showdown is brewing between President Donald Trump and Puerto Rico Gov. Ricardo Rosselló -- and it is starting to get ugly.

The President and the governor are at odds over the ongoing recovery efforts on the island in the aftermath of Hurricane Maria in 2017. In a CNN interview, the governor vented his frustration over not being able to get a meeting with Trump. Speaking with Jim Acosta, Rosselló said that he refused to be cowed by Trump. "If the bully gets close, I'll punch him in the mouth," the governor said. "It would be a mistake to confuse courtesy with courage."

Without a doubt, Trump's treatment of Puerto Rico has been marked by a shocking indifference to the lives of the over 3 million American citizens who live there. The island went through one of the deadliest natural disasters in the United States in a century -- largely on its own. Trump's response to San Juan Mayor Carmen Yulin Cruz pleading for help was to attack her on Twitter.

As the storm battered the island, the President tweeted that the people of Puerto Rico "want everything to be done for them." When he finally did visit the island, Trump tossed paper towels into a crowd as though the dire situation were a joke or game to him.

If anyone doubts the low regard Trump has for Puerto Rico, consider his response to a string of tornadoes in Alabama earlier this year. He told FEMA to give the state "the A+ treatment." That's a far cry from what Puerto Rico heard (and never mind the implication that the President is arbitrarily deciding which areas deserve the best disaster response).

Rosselló has at least 4,600 reasons to be furious at the President; that is only one estimate of the death toll from Hurricane Maria. It was arrived at after a survey by authors from Harvard University and other institutions and published in the New England Journal of Medicine.

Even worse, now Trump is questioning the wisdom of directing more storm relief to Puerto Rico, although Congress has already approved billions of funds for it. His administration will not even give Rosselló a meeting to plead his case. "You guys have to f---ing stop with the meeting request," one administration official reportedly said, according to Rossello's top aides, who met with White House officials Wednesday.

That would be enough to make anyone lose his cool. But Rosselló must resist the temptation to be goaded into fighting at Trump's level. It doesn't work, and it only gives Trump (and his supporters) further ammunition to punch back. And when that happens, the story becomes about their animosity and battle of words, not the devastation in Puerto Rico.

Rosselló seems to understand this: In the same interview where he threatened to "punch the bully in the mouth," the governor said, "I don't think getting into a kicking and screaming match with the President does any good." Here, Rosselló is right: No rational adult should want to engage this petty President in this way. Once you've done that, you've lost.

Rosselló has a huge challenge before him. He must serve as an advocate for his constituents to a President with a demonstrated record of treating Puerto Ricans as second-class citizens.

He must get accurate information to the White House about the situation on the island.

He must keep pushing for an in-person meeting with Trump so he can impress on him that Puerto Ricans are Americans in need, and not his adversaries. Perhaps he can enlist other lawmakers, like Republican Sen. Marco Rubio of Florida, to intervene on his behalf. These would all be far more productive steps than making off-the-cuff remarks in anger.

It remains to be seen whether these are achievable goals. Rosselló may well never get Trump to empathize or care about the thousands of people who died or are suffering as a result of Hurricane Maria. Yet the governor should keep making the case for more recovery aid -- and he should do so with dignity befitting the pride of Puerto Ricans.

Hi: 75° Lo: 50°
Feels Like: 68°
More Weather
Lingering showers Thursday AM will turn to sunshine by the afternoon